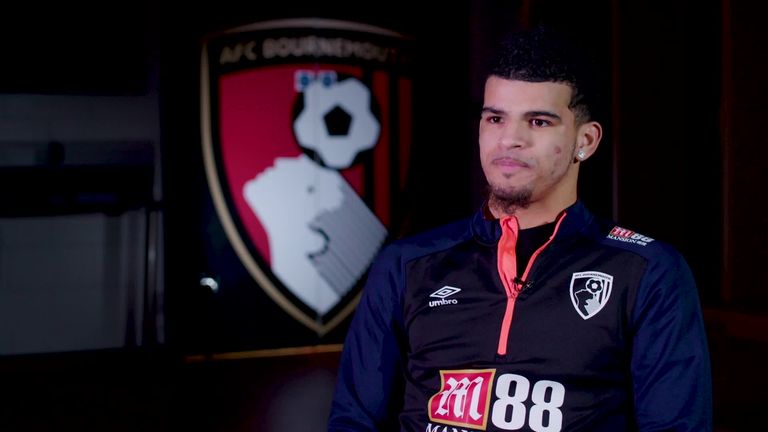 Bournemouth have completed the signing of Dominic Solanke on a long-term deal from Liverpool.

Sky sources understand Bournemouth have paid £19m plus add-ons for the England international striker, who joined Liverpool on a free transfer from Chelsea in 2017.

Solanke had been a loan target for Crystal Palace but a potential deal collapsed and the 21-year-old has now joined the Cherries on a permanent deal.

"Over the past few years, they have been really good in the Premier League and had some good positional finishes as well. I think it's a good club to be at, especially for someone of my age.

"I spoke with the manager this morning [Friday]. He is a really nice guy. From playing and watching the Premier League, I know the sort of manager he is.

Delighted to put pen to paper with @afcbournemouth . Really looking forward to start working with some great players and a great manager. Exciting times ahead!😆🍒 pic.twitter.com/PKWqwBMtlx

Just wanted to say a big thank you to @LFC for the past couple of seasons. I’ve learnt a lot that will benefit me in the near future! All the staff, fans and players welcomed me with open arms and I am thankful. I wish you all the best this season and in the future❤️. #YNWA

"I was excited to meet him and am really looking forward to working with him and seeing what he's about.

"My main target is to score goals and, being a striker, hopefully I can get a few for the team and help the team get wins.

"Playing in the Premier League, every game is tough and together we can try to do as well as we can."

Solanke made 27 appearances, scoring one goal, in his debut season at Anfield but had not featured for Jurgen Klopp's side this term.

Bournemouth manager Eddie Howe is looking forward to working with Solanke, who made his senior debut for England in 2017 after winning the Golden Ball award at the U20 World Cup in South Korea that year.

"Dominic is technically gifted, very athletic and has the physical profile that will give us something different in our front line," said Howe.

"He has done very well for England at various age groups, has a huge amount of potential and I'm really excited about working with him."

Defoe has agreed personal terms with Scottish side and is set to join on an 18-month loan deal, according to Sky sources.

The Cherries have also agreed a deal to sign Liverpool full-back Nathaniel Clyne on loan until the end of the season.

Clyne has started just one Premier League match this season, the 3-1 win over Manchester United in December, with Trent Alexander-Arnold largely preferred at right-back.