The Scottish Premiership matches scheduled for December 29 and January 2-3 have been rearranged; the Old Firm derby between Celtic and Rangers will be live on Sky Sports on February 2; Hibernian vs Hearts (also on Sky Sports) and Dundee vs Dundee United on February 1 Scottish Premiership clubs will start their three-week winter break after the Boxing Day round of fixtures in light of new restrictions for sporting events in Scotland.

Scotland's First Minister Nicola Sturgeon announced on Tuesday all outdoor events in the country will be limited to 500 spectators from December 26 for "up to three weeks".

The original winter break was scheduled to start on January 3, with clubs then returning to Scottish Cup action from January 21-23.

The SPFL board made a majority decision after telling clubs to submit their preference by 5pm on Tuesday.

The three options were to pause as planned after January 3, start the break after Boxing Day fixtures, or begin the hiatus before Sunday's games.

The SPFL board had encouraged clubs not to vote for the last option as there were few slots available to reschedule the December 26 fixtures.

Meanwhile, the Championship, League 1 and League 2 will keep playing as scheduled after Boxing Day.

The fixtures that were due to be played on December 29 and January 2-3 have been pushed back, including the Old Firm, Edinburgh and Dundee derbies, and will now take place on the following dates - either side of the Scottish Cup fourth round:

Aberdeen chairman Dave Cormack tweeted Nicola Sturgeon asking for a delay to the reduced capacities at football stadiums in Scotland, given clubs will be playing on Boxing Day with the restrictions in place as it stands.

His views were echoed by Aberdeen boss Stephen Glass on a night where several Premiership managers were asked about the winter break being brought forward...

Glass: "I was hopeful it would be brought forward further because of the fact people can't come to the games. You saw the appetite here tonight. I think it's disappointing for us we can't host fans at the weekend.

"Why was it okay to play tonight and not Boxing Day? We're standing in open air I think it's a safe environment, but I don't make those decisions." 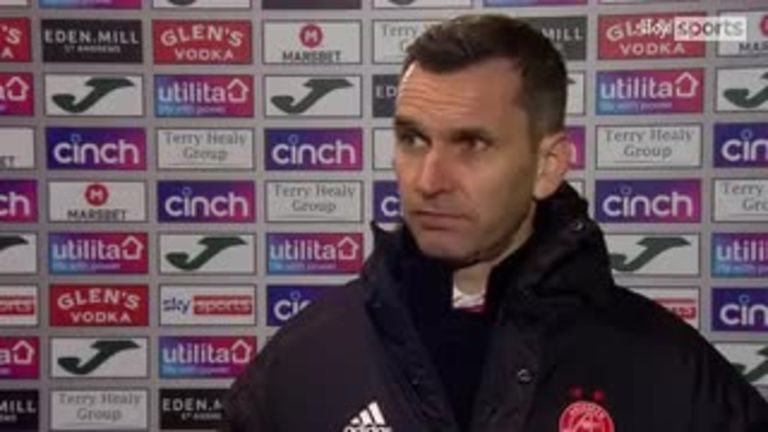 Scottish Premiership managers including Ange Postocoglou give their view on the winter break being brought forward, while Aberdeen's Stephen Glass explains why he wanted it to be introduced even earlier

Celtic's Ange Postecoglou: "We've got to give every chance for supporters to be at the games, if this is the best solution - of course there's no guarantees.

"I thought it made common sense to use the natural break we have to ensure as many games as possible we have supporters in the grounds - they're an integral part, I'm pleased a compromise has been made.

"It makes sense, we'll use our time wisely. It's valuable time we have to get this team ready for the second half of the year."

Hibernian's Shaun Maloney: "It's always a shame when there's less supporters. When they weren't there, we all realised what the game is. It's one game, then I hope we have them back as soon as possible."

Hibernian's Ron Gordon, Ross County's James McDonald and Rangers general manager Stewart Robertson are the Premiership representation on the board. Hamilton's Les Gray and Dunfermline's Ross McArthur are the Championship representatives, with Forfar's Alastair Donald the League 1 and 2 rep, plus alternate director Paul Hetherington from Airdrieonians on the board too.

It is understood 10 out of the 12 Premiership clubs wanted the winter break brought forward.

Doncaster said: "We have had intense and positive discussions with all cinch SPFL clubs over the past 24 hours, since the announcement by the Scottish Government of a three-week period of restrictions on fans attending matches.

"We have advised our clubs that any postponements increase the risk of further disruption to an already highly congested fixture calendar.

"There are mixed views amongst cinch Premiership clubs about what to do for the best.

"However, a majority favour the postponement of fixtures to give a chance for games scheduled to be played over the festive period to be played in front of fans, once the three-week period of restrictions comes to an end.

"The SPFL board has agreed to postpone the 29 December and New Year cinch Premiership fixture cards.

"cinch Championship, League 1 and League 2 clubs voted to continue playing through the Government restrictions and we look forward to their festive fixtures over the next fortnight.

"We would like to place on record our sincere thanks to Sky Sports and Police Scotland for their flexibility in accommodating these changes and to all cinch SPFL clubs for their clear, positive and constructive feedback as we work together to get through the challenges posed by Covid-19."

'Early winter break is for the fans' Motherwell were one of the clubs in favour of an early winter break and CEO Alan Burrows explained why on Sky Sports News:

"From my point of view, it isn't necessarily just about finance over that short period of time.

"I think football is a sport for spectators. It's a spectator sport, obviously, and I think most people's experiences last year through the lockdown wasn't a positive one.

"I think football suffered across the globe for that.

"If you look at Scotland as a percentage of vaccinated citizens, we are at a decent spot and that is continuing to roll, so my view is that while we have a natural break in the calendar with the winter break, we should move that forward to at least give us some chance of those games being played in front of fans at some point down the line.

"If it can't, and those rearranged games still have restrictions then we just need to get on with it and play the games behind closed doors, and we accept that.

"I think what we have to do as a football community is look to our fellow clubs who have also been struggling through this year.

"Aberdeen said they could potentially lose half a million pounds if this [games with limited crowds of 500] goes ahead.

"And I know there are other clubs who are due to play Rangers and Celtic at their home stadiums during that period and that could cost them hundreds of thousands of pounds.

"So I think clubs batting for each other in this situation and looking after each other collectively, I think that is the best way for football to be."

What are the new restrictions in Scotland? 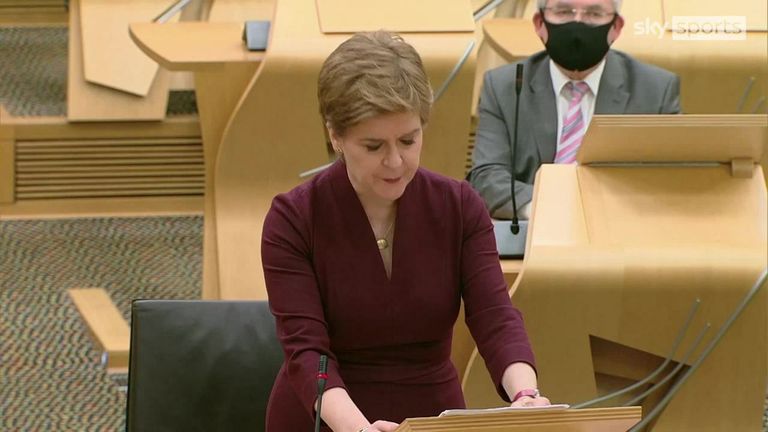 Sturgeon said all outdoor events in the country will be hit by the new restrictions which will limit attendances to 500 spectators from Boxing Day for three weeks.

Sturgeon revealed the new measures in parliament on Tuesday, which will also call for one-metre physical distancing to be in place between those who attend any outdoor event during that time.

That means the Premiership fixture schedule on Boxing Day and December 29 will be affected, while the Old Firm clash at Celtic Park plus Dundee and Edinburgh derbies on January 2/3 will be played in near-empty stadiums, as it stands.

'No guarantee over restrictions' 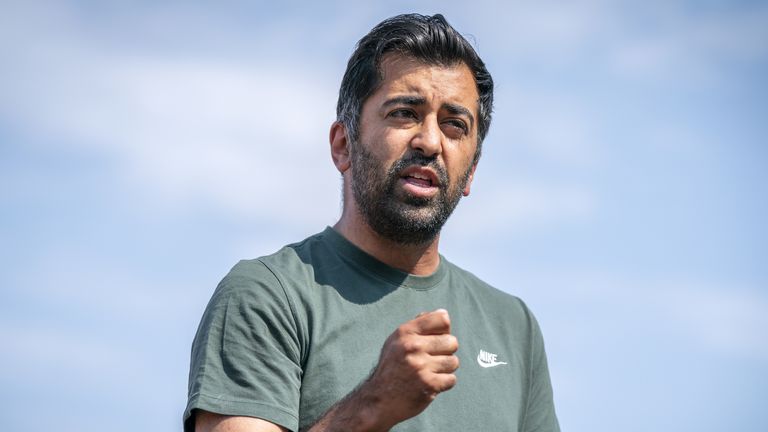 Cabinet Secretary for Health & Social Care Humza Yousaf was asked about the new restrictions that will take effect in Scotland from Boxing Day and promised to review the crowd limitations over the course of the next three weeks.

"What I've learned in the course of the past 20 months is that it's very difficult to give guarantees in the midst of a pandemic, especially when you're at the foothills of a wave of a new variant," Yousaf said.

"The First Minister said 'up to three weeks' and we'll review that regularly during the course of those three weeks.

"But I can give you an absolute promise that the government takes no pleasure in bringing forward protective measures and we won't keep them in place for a minute more than they have to be."