Celtic vs Hibernian on Monday to go ahead, live on Sky Sports, kick-off 7.45pm; Christopher Jullien has tested positive for Covid-19 with 'close contacts' all required to self-isolate; Hibs players have expressed reservations over playing; Celtic and SPFL refuse further testing

Following a training camp in Dubai, the entire Celtic squad was tested upon arrival into Glasgow Airport on Friday and received the results on Sunday, initially revealing one unnamed played had tested positive.

On Monday it was announced Jullien returned the positive test, and though the remainder of the squad and backroom team tested negative, those deemed "close contacts" - including Lennon - are now required to isolate.

"Clearly we are hugely disappointed, as we know our supporters will be," the club said in a statement, adding: "Celtic will, of course, fulfil its fixture against Hibernian this evening."

Celtic had already faced criticism over their warm-weather training camp, with Scotland's First Minister Nicola Sturgeon questioning whether they were complying with social-distancing rules after seeing photographs on social media.

In their statement Celtic said a case could have occurred had they stayed in Scotland, while also stressing they have the "very best procedures and protocols" in place.

"The contacts were identified during the period from Wednesday last week, primarily around flight and team coach travel, during which time Celtic applied the same rigorous protocols used for pre-season training camps, UEFA match travel and for all domestic match arrangements in Scotland," the statement added.

"These protocols have served us well in the past, as the Club has not had one positive case in our own 'bubble' until now. As we have already stated, Celtic's decision to travel to Dubai for a training camp was for performance reasons. Whilst we were in Dubai, the announcements made on January 4 significantly changed the COVID landscape.

"The reality is that a case could well have occurred had the team remained in Scotland, as other cases have done in Scottish football and across UK sport in the past week.

"Celtic has done everything it can to ensure we have in place the very best procedures and protocols. From the outset of the pandemic, Celtic has worked closely with the Scottish Government and Scottish football and we will continue to do so."

SFA Chief Executive Iain Maxwell says Scottish clubs will be advised against travelling abroad for the remainder of the season - with the exception on Rangers, who remain in European competition.

Maxwell re-iterated that Celtic's trip to Dubai had been approved by the Scottish Government rather than the governing body and that it seems highly unlikely any other clubs will now follow suit.

"The advice was straightforward - the Scottish FA got a request from Celtic in November, we passed it on to the Scottish Government and they approved it," he said.

"It's not the Scottish FA's permission to give. In terms of was it the right decision, I completely understand that Celtic have done that trip over previous years but to do that in the current climate is up for debate, I'm sure Celtic are thinking about that.

"In the current circumstances it would be difficult to agree to it. We're lucky that the only club that will be travelling abroad is Rangers, which is in a different context, so we won't be asked the question again.

"I think it's fair to say we won't be encouraging clubs to go away." 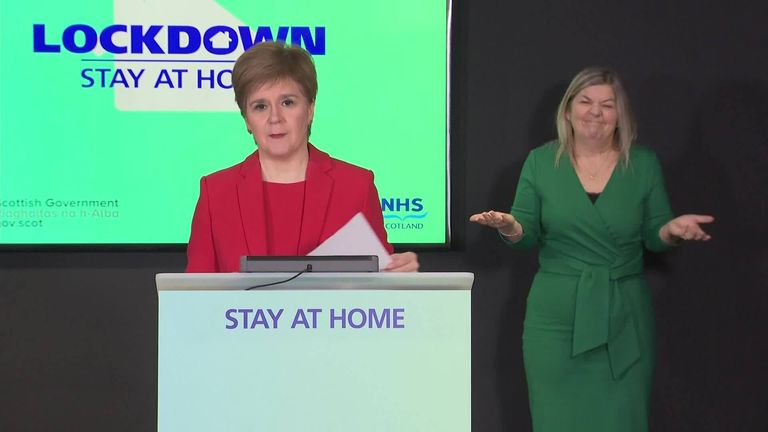 First Minister Nicola Sturgeon reacts to Christopher Jullien's positive test on his arrival back from Celtic's mid-season trip to Dubai.

First Minister Nicola Sturgeon has said the Scottish Government will review the rules around travel exemptions, adding that she remains doubtful Celtic's trip was "essential".

The Scottish Government announced on Sunday night persons who have travelled back into the country from Dubai since January 3 were being asked to isolate, but current guidelines mean Celtic are exempt due to their elite sporting status.

"Unfortunately, it's impossible for me to talk about Dubai today without making some mention of the situation with Celtic Football Club," Sturgeon said. "I can't tell you how disappointed and frustrated I am to be facing another briefing that may be dominated by football.

"Football and elite sport more generally enjoys a number of privileges right now that the rest of us don't have. These privileges include the right to go to overseas training camps and be exempt from quarantine on return.

"It is really vital, obviously for public health reasons, but I think also out of respect for the rest of the population living under heavy restrictions, that these privileges are not abused.

"I know what I'm about to say won't please everyone, nothing I can say about football ever pleases everyone, but as I have said before I do have doubts, based on how the club itself described it, about whether the club's trip to Dubai really was essential.

"I have doubts based on pictures some I've seen about whether adherence to bubble rules was strict enough. Celtic now have a positive case and another 15 playing and coaching staff are being required to isolate.

"As in any situation like this, it is for the football authorities to decide whether further action is necessary, and it is for them to consider that carefully.

"It does make it essential for us to review the rules, including those around travel exemptions, and that is what we'll be doing, but as we do I hope Celtic themselves will reflect seriously on all of this."

On Saturday, Kennedy admitted some photos of their Dubai trip might have painted a "bleak picture", but he insisted the club did everything possible to mitigate risks of catching Covid-19 on their training camp and both the Scottish Government and football authorities were content with the measures they put in place.

Kennedy stressed they travelled on their own flight, stayed in a separate part of their hotel and only ventured outside to go to training.

Celtic organised the trip in November and requested their match with Hibernian be moved to Monday. The request was approved by the SPFL board despite protests from Hibs.

The Scottish Football Association has imposed a temporary suspension of all football beneath the Scottish Championship for three weeks.

The suspension will start from midnight on Tuesday morning, so Monday night's Scottish Cup fixture between Camelon Juniors and Brora Rangers will go ahead.

A statement read: "Following a meeting between the Scottish FA and the Minister for Public Health Sport and Wellbeing, both parties have agreed to impose a temporary suspension of all football beneath the Scottish Professional Football League Championship, encompassing all predominantly part-time tiers of the Scottish professional pyramid, from midnight tonight."