The Portuguese winger scored 13 goals last season; Celtic triggered the clause to make the move permanent from Benfica; Jota has agreed a five-year deal with the Scottish Premiership champions

Celtic have signed winger Jota on a five-year deal following an impressive season-long loan from Benfica.

The 23-year-old played a key part in the club's double-winning side - contributing 13 goals across all competitions as Ange Postecoglou's side won the league and League Cup.

Celtic triggered the option to buy with a fee of £6.5m and Benfica are understood to have a significant future sell-on percentage included as part of the transfer. Celtic winger Jota signed a permanent deal after feeling at home at the club as he relishes the chance to experience 'special' Champions League nights.

"Champions League is probably the best club competition in the world," he said when asked if Celtic's automatic entry into the tournament was pivotal in keeping him in Glasgow.

"Of course it is always a trigger for a player to come and play in the Champions League, we have to be honest about that and I am no exception.

"I have already made my debut in the Champions League with Benfica.

"I know the atmosphere and the feeling but every club is different so here it will be different."

After Celtic were crowned champions of Scotland in Ange Postecoglou's first season in charge, take a look at some of the key games on their road to the title

Jota also spoke about the "amazing" experience he had last season in the context of his return to Glasgow.

He said: "The club speaks for itself and the experience I had last season was amazing so it was an easy choice to make.

"I am really happy that I am staying here, that's what I wanted and I just can't wait to develop more under the team and to conquer a lot of things.

"There is no moment when you just blink and think, 'yes, now I am going to stay.' It was just natural.

"During the week, the months, the year, I felt, 'okay, I should stay here' and I am really happy.

"I thought, 'I am feeling good, I feel at home, this is the right place to develop so let's do it'."

For the Celtic fans who have taken him to his heart and who are delighted to hear the news about his signing, Jota said: "I just try to do my thing on the pitch which is why I am here.

"And what I can promise is that I will fight every day to honour the colours of the club and to fight for things, to be a better player and person because I want to achieve a lot of things."

Jota also had a message for his former club Benfica, whom he joined as youth in 2007.

He said: "It was quite a nostalgic moment for me because I was there for 15 years. It was like a kid leaving home and leaving his parents.

"I guess it is like (Kieran) Tierney going to Arsenal (from Celtic), everyone kept saying to me that, 'yes, he has left home' and it is the same for me.

"I am a bit nostalgic about that because I really love Benfica and my story with them will keep on and I am not going to say goodbye because I know one day I will go back.

"But I am more than happy to join Celtic and this is what I really wanted so I am 100 per cent here now and to give my best." 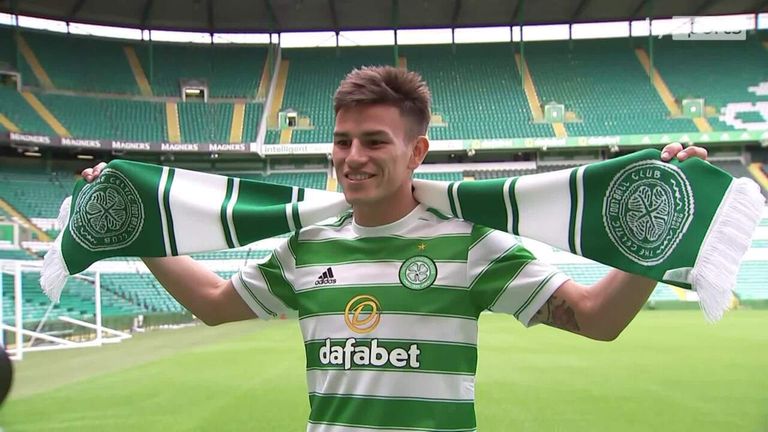 Alexandro Bernabei reflects on his move to Celtic after the left-back joined on a five-year deal for £3.75m.

Alexandro Bernabei revealed that he wasted no time in flying from Argentina to Scotland to sign for Celtic.

The 21-year-old left-back moved to the Scottish champions from Lanus in his homeland's top division on a five-year contract for a fee reported to be £3.75million.

"It was a dream of mine to come and play in Europe. It's happened that I have come to a big club, a huge club like Celtic. So I didn't think twice.

"The Champions League is a really huge competition.

"Whether it is PSG or another club, for me, it is just unbelievable. Coming from a small town, Correa in Argentina, it is just a dream come true.

"I think the Champions League is one of the most important competitions in the world and we are going to give it all for Celtic. From what I have seen and heard, there will be about 60,000 people in the stadium.

"I can't wait to feel that adrenaline and to feel that atmosphere from playing in front of the fans. First of all, I would like to be a champion with Celtic and I want to enjoy all the years I have at the club."

Who will be on the move this summer when the transfer window opens on June 10 and closes at midnight on September 1?