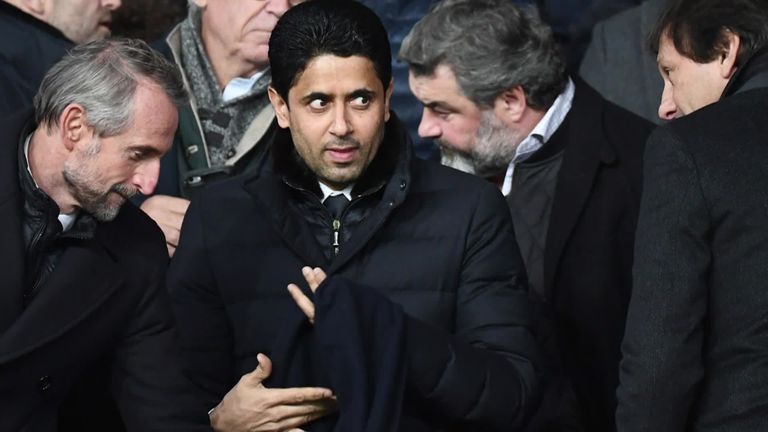 PSG president Nasser Al-Khelaifi has been charged by the Swiss Attorney General in connection with a three-year corruption investigation allegedly involving ex-FIFA secretary general Jerome Valcke and a third businessman.

The alleged offences against Al-Khelaifi, who is chairman of BeIN media group, are not to do with his ownership of French champions PSG or his involvement as a member of the UEFA executive committee.

Al-Khelaifi released a statement claiming the charge "will be proven completely groundless and without any substance whatsoever".

"After an exhaustive three-year investigation, where I have fully and openly co-operated with the Public Prosecutor in Switzerland, I am pleased that all charges of bribery in connection with the 2026 and 2030 World Cups have been dropped," Al-Khelaifi said.

"As I have said vehemently and repeatedly for three years, the charges have not - and have never had - any basis whatsoever, either in fact or law. It is now - finally - indisputable fact that the 2026 and 2030 agreements were negotiated at arms length and without any improper influence in any form.

"After the most forensic public, private, lawful and unlawful scrutiny of all my dealings, I have been cleared of all suspicions of bribery and the case has been dismissed definitively and conclusively.

"While a secondary technical charge remains outstanding, I have every expectation that this will be proven completely groundless and without any substance whatsoever, in the same way as the primary case."

Al-Khelaifi says he has asked the Swiss authorities to open a criminal investigation into the case against him, claiming it's been "characterised by constant leaks".

He added: "While I have co-operated with all authorities during the legal process, the three-year investigation has been characterised by constant leaks, misinformation and a seemingly relentless agenda to smear my reputation in the media - completely irrespective of the facts and the notion of due process.

"For that reason, I have requested the relevant Swiss authorities to open a criminal enquiry into the conduct of the investigation. I also reserve the right to take action against certain media who for three years have repeatedly published factually-unsupported and highly damaging articles, often based on illegally-sourced and - quite remarkably in some cases - faked and fabricated materials, to satisfy their narrative of my supposed guilt."

Valcke has been charged with three offences: accepting bribes, several counts of aggravated criminal mismanagement and falsification of documents.

Prosecutors say, at the end of January, FIFA informed them in writing they had reached an 'amicable agreement' with Al-Khelaifi and a partial agreement with Valcke, who is no longer a FIFA executive.

Football's world governing body had withdrawn their criminal complaint in relation to bribery allegations in connection with the award of media rights for the World Cups in 2026 and 2030.

The OAG says FIFA's withdrawal had no impact on Thursday's indictment.

Both Al-Khelaifi and Valcke have previously denied any wrongdoing.

Sky Sports News have contacted Valcke for his response. FIFA and UEFA have declined to comment.