Spanish football expert Alvaro Montero: "Zinedine Zidane is under pressure. The next two games are extremely important for Real Madrid, and they have to react"

So much for the proposed new closed shop of the European Premier League.

One Spanish newspaper branded Real Madrid's 3-2 home defeat to Shakhtar Donetsk as "embarrassing" but for many invested onlookers, Wednesday's disastrous start to the Champions League group stage campaign highlights the state of flux that shrouds the 13-time European champions.

The result came five days after Zinedine Zidane's men lost 1-0 to newly promoted Cadiz at the Alfredo Di Stefano, Real's training ground which currently doubles at their venue for home fixtures while the club make significant developments to the Bernabeu. 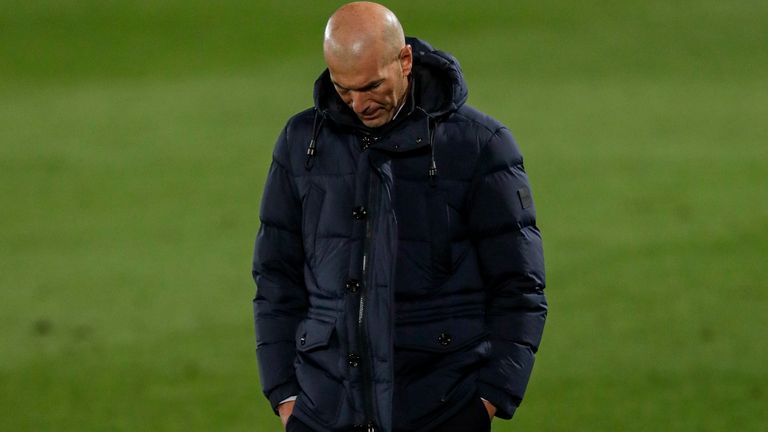 Spanish football expert Alvaro Montero says the next two games, starting with Barcelona on Saturday, will be crucial for the future of Read Madrid head coach Zinedine Zidane

Now, they face their biggest game of the season. An early visit to the Nou Camp always promised to be a defining fixture but with Ronald Koeman at the start of another Barcelona transition, both sides appear a pale imitation of the powerhouses of bygone years.

The Spanish papers can be unforgiving, but those damning headlines were not without validation. Gallingly, Shakhtar were without 10 first-team players due to Covid-19, but the Ukrainians found themselves 3-0 up at half-time.

"It was an embarrassing defeat," Spanish football expert Alvaro Montero told Sky Sports. "Nobody really saw this happening. Zidane was hoping to use some fringe players - for example, Marcelo and Ferland Mendy on the right side of the defence as well as changes in the midfield - because he was thinking about El Clasico. 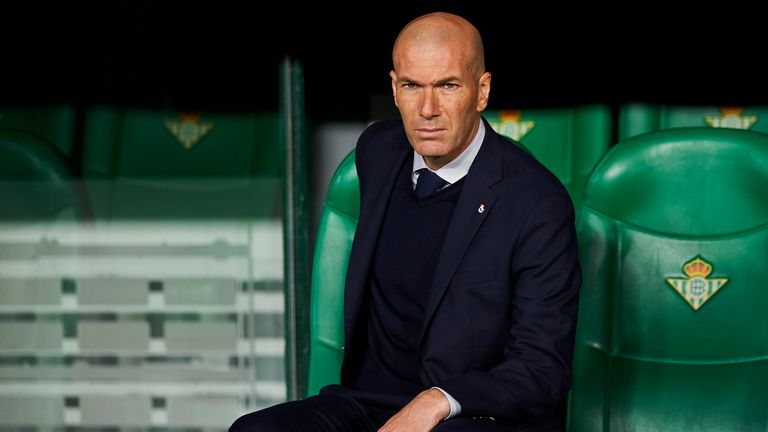 Real Madrid head coach Zidane says it is up to him to 'find a solution' after his side lost 3-2 to Shakhtar Donetsk in their opening Champions League group game.

"Real are the Spanish champions in La Liga last year, and while Shakhtar are a good team, being without 10 players for a long trip from Ukraine, and players who would've been in the starting XI, it's an embarrassing situation. It adds to another one only last Saturday when they lost to Cadiz in Madrid."

It was the first time that Real have lost three consecutive matches in the Champions League - and in European competition since September 1986 - while it's the first time ever that they lost their opening group stage fixture.

Zidane, who was without the injured Eden Hazard and started with Karim Benzema on the bench, took over an hour to appear in his post-match press conference after his team's humbling.

When he finally emerged, he told reporters: "We were lacking a bit of everything today but worst of all we were lacking confidence. It's difficult to think of what to say when you concede three goals in the first half. We made a mistake with their first goal and from then on it was very difficult.

"I'm left with a very bad feeling because of everything that happened tonight. It's a bad game, a bad night but I'm the coach and I'm the one who has to find solutions. I didn't find them tonight and it's a very difficult moment for the players."

Montero believes the Frenchman will be feeling the heat after two setbacks in a week.

"He's under pressure," he continued. "We have to remember that the club president Florentino Perez usually goes to the dressing room and he did so yesterday for three minutes to try to give the players and the head coach some good feelings and vibes because the situation is extremely bad for Zidane.

"The next two games are extremely important for Real with the second Champions League group stage game against Borussia Monchengladbach coming just days after El Clasico. That game they simply cannot lose as it would put them in a really difficult position to qualify for the knockout round.

"Zidane is under pressure, and many people both in the press and among the fans are talking already about two possibilities to replace him: Raul Gonzalez, the former player, who is now coaching the second team Real Madrid Castilla and Mauricio Pochettino.

"They have to react as a loss on Saturday is not only a setback for themselves but a major boost for their title rivals."

Zidane still has credit in the bank among some supporters having led the club to three successive Champions League titles, in addition to last season's domestic honour. But, crucially, the patience of board members has been tested by recent results, undermining the club hierarchy's confidence in him.

Real are in line to benefit from the return of their inspirational leader this weekend. Sergio Ramos, who was withdrawn at half-time in the defeat to Cadiz, is back in training having missed the midweek debacle. Remarkably, Madrid have lost seven of their last eight Champions League matches in which he has not featured.

Real's first league title in three years was built around having a tight defence, with Ramos at the heart of a proud record of just four goals conceded in 10 La Liga games post-lockdown before being crowned champions.

"We have to change things. I feel awful for the players, who have won so many things for me and don't deserve this. But this is football, one day everything is grey and the next the sun comes out. Sometimes it's very difficult and tonight is one of those times."

The lack of a crowd and atmosphere appears to have hampered Real, but they will hope it plays in their favour at an empty Nou Camp.

Are Barcelona in any better shape?

With seven points from their opening four La Liga games, it comes as a surprise to see Barcelona currently ninth in the table, albeit with two games in hand over several sides above them. A victory on Saturday would kick-start the Koeman era.

The Dutchman could be without several key individuals. Marc-Andre ter Stegen is yet to feature this season having undergone a knee operation in August, while Samuel Umtiti is a major doubt as he battles to be declared fit following his own knee problems.

Jordi Alba has been sidelined since tearing his hamstring in the 1-1 draw with Sevilla before the international break. Madrid have seldom relied so much on the collective with so few players capable of making the difference alone, but in Lionel Messi, Barcelona know they have one the great game-changers.

The inconsistencies already under Koeman illustrate that this remains the onset of a work in progress; one week sweeping aside Villarreal 4-0, stumbling to defeat at Getafe the next. Koeman is still trying to mould his group back into a competitive and confident outfit in the aftermath of one of the club's worst defeats in its history, the 8-2 capitulation against Bayern Munich back in August.

The hosts will of course take confidence from their midweek 5-1 win over Ferencvaros. Every victory in the competition will be greeted with open arms given the club's current financial predicament. The €570,000 win bonus comes in the same week the process of introducing a wage cut on players and staff was formally announced.

Of slight concern will be the form of Messi, who has scored only five goals from open play since the restart in June. Antoine Griezmann has flattered to deceive ever since he arrived in July 2019, while youngsters Pedri, Ansu Fati and Sergino Dest continue to be integrated alongside those with greater experience.

"One or two months ago, people felt Messi was at war with the club," Montero said. "Of course, his relationship with board members and president Josep Maria Bartomeu is not as good as it should be, and Messi didn't play well in the defeat to Getafe.

"He has played 90 minutes in all four of their previous La Liga games, and it's not the best Lionel Messi but the situation is much better than it was two or three months ago."

Following the first of this season's encounters with Real, we will have a far better understanding of where Koeman is at in his evolution.

Follow Barcelona vs Real Madrid with our dedicated live blog across Sky Sports' digital platforms from 2pm on Saturday and on Gillette Soccer Saturday.