Griezmann reveals why he admires Liverpool and Alexandre Lacazette

By James Dale and Geraint Hughes 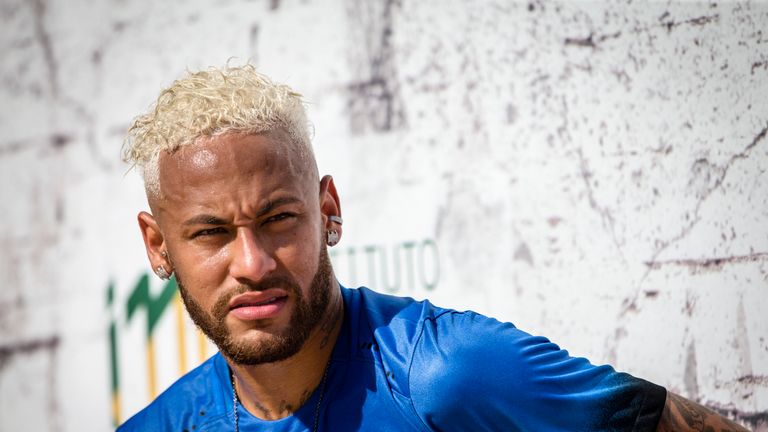 Antoine Griezmann says Barcelona must complete a "difficult" transfer for Neymar before he starts contemplating an all-star attack with Lionel Messi and Luis Suarez.

Paris Saint-Germain sporting director Leonardo denied there has been a "concrete offer" for Neymar over the weekend, after Sky Germany reported Barcelona had offered £90m plus two players for the 27-year-old.

Griezmann completed his transfer to Barcelona earlier this month but the fee is still being disputed by his former club Atletico Madrid, and he expects his new team to face another challenge to seal Neymar's return to the Nou Camp.

Asked what it would be like to have Neymar join him, Messi and Suarez, Griezmann told Sky Sports News: "We have to get it done first, because it is a difficult transfer.

"But he is a great player, he's had a couple of injuries but is at an incredible level.

"We also have [Ousmane] Dembele, [Philippe] Coutinho and Malcom who are also important players for us and lets hope we can achieve great things with them."

Dembele, Coutinho and Malcom were three of the players featured on Barcelona's six-man list of potential exchange options as part of the deal to sign Neymar.

It is understood PSG are looking for more than the £198m they paid Barcelona to sign him two years ago.

But there is a willingness to make the deal happen on both sides, which would leave Barcelona boss Ernesto Valverde with the challenge of fitting four star names into his starting line-up.

"I hope I will have an important role, I want to be an important player for the team and help in whatever way I can," said Griezmann.

"As long as I enjoy playing with my team-mates and give it all on the pitch, it doesn't matter."

Two years ago Griezmann admitted a move to Manchester United was "a possibility", but he now explained he was "very comfortable" in Spain when he had the chance to move to the Premier League.

"I was having a lot of fun in La Liga," he said. "We have one thing the Premier League does not - the sun."

Despite United's interest, Griezmann revealed the English club he admires most are Liverpool "because of the fans".

"They deserve to win the Premier League, hopefully one day they will win it again," said Griezmann.

I would love to play with Lacazette

Griezmann says he has the "best player in the world" as a team-mate in Messi, but there is another Premier League player he would still like to link up with.

"I would love to play with [Alexandre] Lacazette," he said. "He's a friend of mine, we played together in the national team. He's an amazing player, has a lot of talent."

'It's a better life for me, my wife and kids'

"These are the words of Antoine Griezmann as he embarks on his new career with Barcelona," says Sky Sports News reporter Geraint Hughes in Yokohama.

"He's reluctant to talk about his move from Atletico Madrid, as it's becoming an evermore acrimonious transfer between the two clubs despite the fact it's already happened. Griezmann is now with his new team-mates in Japan, although not all - Lionel Messi and Luis Suarez remain among several first-team players not on the pre-season tour after playing in the Copa America.

"He appears to have been warmly welcomed, with Barcelona keen to show off their latest asset to a Japanese public who seem to devour football from both La Liga and the Premier League. However, Griezmann is just anxious to get playing in a Barcelona shirt, keen when he can to play alongside Messi and also pretty keen to be part of a fabulous four if Neymar returns.

"When I spoke to him in an exclusive interview for Sky Sports News, it seemed to me he was pretty confident Neymar will return to the Nou Camp after a few years away in Paris. But for now, Griezmann trains with his new Barcelona team-mates ahead of tomorrow's pre-season game against Chelsea in the rain. Surely a problem now he's opted for a floppy hairstyle!"