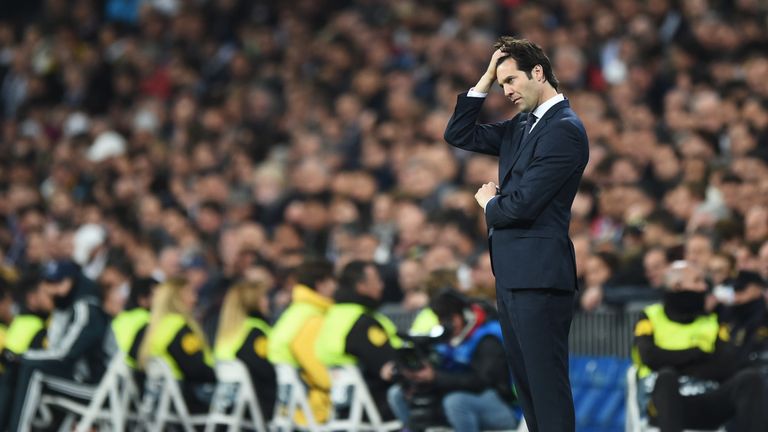 Santiago Solari says Real Madrid will be back

Santiago Solari admitted Real Madrid missed the suspended Sergio Ramos after the Champions League holders were humbled by Ajax at the Bernabeu.

Real saw a 2-1 first-leg lead overturned inside 18 minutes by Ajax who ran out 4-1 winners to seal a famous 5-3 aggregate victory, their first in the knockout stages in 22 years.

Solari insisted before the game Real had enough quality to cope without Ramos - who served the first of a two-game UEFA suspension for receiving a yellow card on purpose in the first leg in Amsterdam - but quickly backtracked after presiding over the club's worst defeat in European competition.

Asked if Ramos was missed, Solari told Movistar: "Of course.

"Without talking badly about any of our players, of course we missed our captain."

The humiliating defeat, Real's fourth on the spin at home, compounded a miserable week for the club after they suffered damaging defeats to Barcelona in La Liga and the Copa del Rey.

"The season is difficult, but we are here to show our heart and character in difficult moments," Solari added.

"Easy moments are easy for everyone, you can climb up and surf them, but difficult moments you have to show bravery."

Solari's tenure as successor to Zinedine Zidane will undoubtedly come under pressure after Real's love affair with the competition they have won in four of the last five seasons came to an end in the last 16 for the first time since 2009/10.

But the Argentine has stressed desperate times should not call for desperate measures, insisting Real can rise from this unprecedented slump.

"What we must do is remain as calm as possible in such a difficult moment and take it on with the best character," he said.

"Madrid is bigger than any of us - it always returns - and returns even stronger."