Southampton midfielder joins up as Stones, Delph and Loftus-Cheek withdraw through injury; recovering Henderson to remain with Southgate's squad

James Ward-Prowse has been called into the England squad for the European Qualifiers against Czech Republic and Montenegro.

The Southampton midfielder, who won his only senior cap to date in March 2017 against Germany, will join up with Gareth Southgate's squad at St George's Park on Monday afternoon, but Manchester City pair John Stones and Fabian Delph and Chelsea's Ruben Loftus-Cheek have all withdrawn due to injury.

Southgate will now begin his preparations with a squad of 23 players.

The England boss was full of praise for Ward-Prowse, who has scored in his last three games, when announcing his squad last week.

"We know there are some players just on the fringes that we wouldn't hesitate to call in, both in terms of their ability, but also in the case of a player like James Ward-Prowse and his character," he said. "He's absolutely the sort of character you want around the squad."

Ward-Prowse's inclusion in the squad will boost England's midfield options following an injury to Jordan Henderson, who will remain in Southgate's party.

Henderson was forced off with an ankle injury in Liverpool's Champions League last-16 second-leg win against Bayern Munich on Wednesday, and missed his side's victory at Fulham on Sunday, but Jurgen Klopp had insisted that the midfielder would be able to join up with the national side.

Speaking after the 2-1 win over Fulham, Klopp said: "I think he will have two or three days at Melwood with his rehab.

"It looks positive and he is in contact with Gareth that when he can train, he will go to the national team.

"If he plays, Gareth will decide, but it was not that serious and in three or four days, he should be fine." 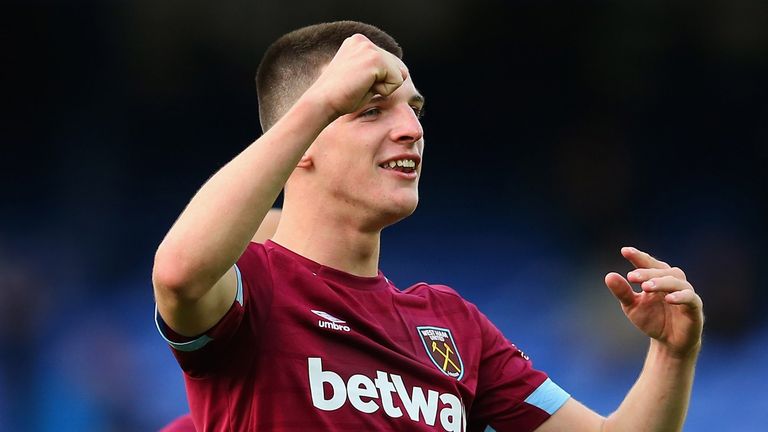 Gareth Southgate believes Declan Rice has a bright future ahead with England, but says he cannot offer the player any guarantees

Ward-Prowse, 24, has made 22 appearances for Southampton this season, scoring six goals.

England host Czech Republic in their Group A opener at Wembley on Friday evening before then travelling to Podgorica to take on Montenegro on Monday.