Jack Grealish made his England debut in September last year and has amassed seven caps over the course of the season; Grealish is in contention for a starting place as England begin their Euro 2020 campaign against Croatia at Wembley on Sunday 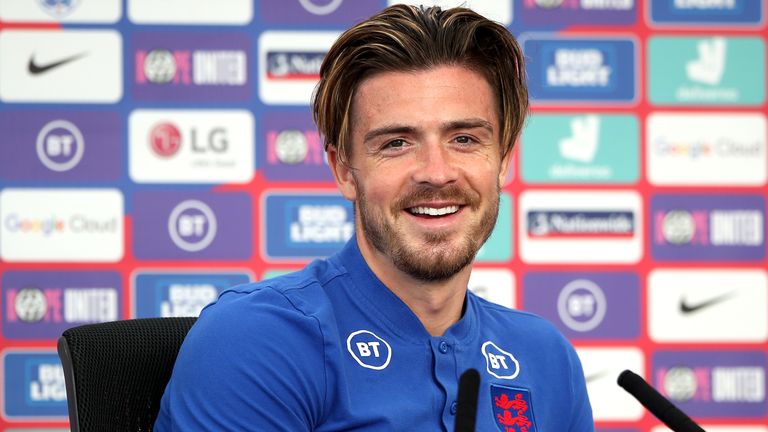 Jack Grealish says the influence of England captain Harry Kane has helped him mature "as a player and person" during his first campaign as a member of the national squad.

Grealish, who captains Aston Villa, made his England debut in September last year and has amassed seven caps over the course of the season, with his form putting him in contention for a starting place in Sunday's Euro 2020 opener against Croatia.

The 25-year-old also credited Liverpool skipper Jordan Henderson, explaining that the duo's professionalism has shown him what was required to take his game to the next level.

"But I think the main thing is being here for this season, you come here and you see the likes of Jordan Henderson and Harry Kane, and what they do off the field.

"Obviously what they do on it we can all see that, but what they do on the training pitch and around the place and how they look after themselves, and you sit there and you think it's no wonder why they've had the careers that they have had.

"And that's I think one of the main things that has made me mature as a player, as a person and as a captain."

"But when you come away here there's no better person to look at than Harry Kane, to see the way he looks after himself and stuff like that." 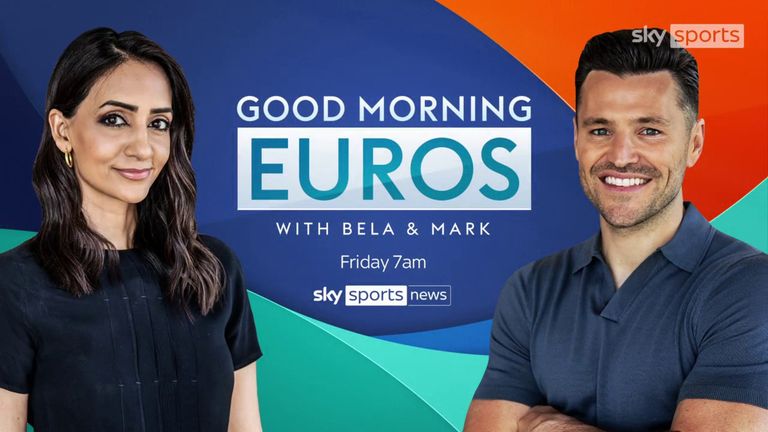 Don't miss our new show 'Good Morning Euros', from 7am on Friday on Sky Sports News.

England had great success from set-pieces as they reached the semi-finals of the 2018 World Cup in Russia, and the elusive Grealish is ready to play his part in creating a repeat of that showing.

The combination of his threat with the ball and his fast feet have led to the attacking midfielder being fouled regularly for both club and country, but it's a burden he's willing to accept to help the team. 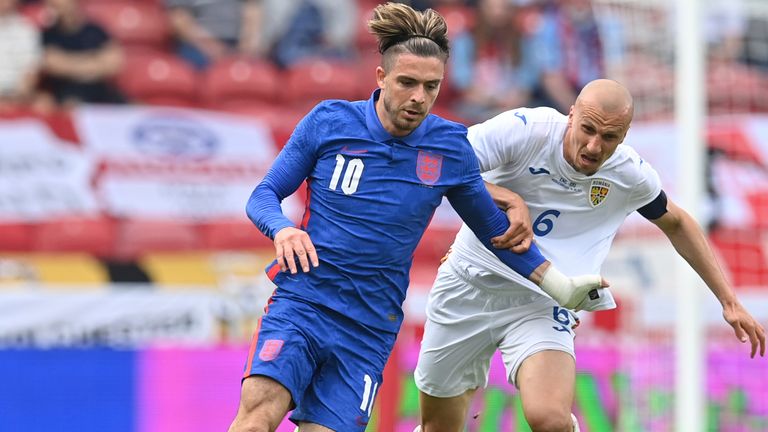 "I got a few kicks last week in the two games," Grealish said. "But like I said after those games, if I'm doing something to help the team, I'll do that.

"You look around our team here and you see the set-piece takers here that we've got - especially Trips [Kieran Trippier] - obviously it was unfortunate that Trent [Alexander-Arnold] went home - but there's still so many people that have just got unbelievable set-piece ability here.

"So if I'm getting fouled or whatever, I'll take the hits for the team. That doesn't really bother me."

Grealish insists nerves will not strike on the big stage at Euro 2020 like they did on his driving test.

Asked if he had suffered from nerves in the past, Grealish replied: "My driving test. I hated it.

"Do you know what? I had to be at Villa after actually, we were leading up to the FA Cup final and I still wasn't driving.

"So I think it was the Thursday and the final was on the Saturday, and they wanted me in. I had my driving test and straight away, as soon as I pulled out of the test centre, I stalled the car, and I knew that I'd failed.

"So I just said to the guy after two minutes: 'Have I failed mate?'. He was like: 'No come on carry on', but I knew that I failed so I just got out of the car and went to training."

Grealish has never suffered from stage fright when on the football pitch and puts that down to being more confident in his ability on the ball than he had in his early driving lessons.

"With football, I just try and go out and play. At the end of the day I've done it my whole life. I've done it every day in training and I've done it as a kid, playing in these games.

"So when I step onto the pitch, playing a big game, I just tell myself it's just a game of football, what I've done my whole life, so I just take it in my stride, I don't change anything, I just go with the flow."

Merson: High-tempo England can 'blow teams away' at Euros

England can win Euro 2020 if they can bring their Premier League pace to the tournament but their warm-up friendlies were a "waste of time", says Paul Merson.

Second favourites England start their tournament against Croatia on Sunday, and come into the tournament on the back of two underwhelming warm-up friendly victories over Austria and Romania.

The magic man, who represented England at Euro 1992 and World Cup 1998, told Sky Sports what they need to do to keep up their bright record in home tournaments, and put behind their memories of a dismal exit to Iceland at the last European Championships five years ago.

Gary Neville tells the Sky Sports Football Euros podcast how he thinks England will fare at Euro 2020, how transfer talk will affect Harry Kane and his tip for the tournament.

Ahead of the big kick-off on Friday when Turkey play Italy in Rome, and England's opener against Croatia two days later at Wembley, Neville spoke to the debut edition of the podcast to give his lowdown on England's chances, his memories of a European Championships on home soil and much more.

Neville was the first guest on the Sky Sports Football Euros podcast, with many more to follow throughout the tournament. Stay across skysports.com to follow them all, plus live blogs and reports from every game across Euro 2020 from June 11-July 11.