Trent Alexander-Arnold was forced off in the closing stages of England's 1-0 friendly win over Austria on Wednesday; Liverpool full-back pulled up after clearing the ball and had to be supported while walking off the pitch; England's opening Euro 2020 game is against Croatia on June 13

Trent Alexander-Arnold has been ruled out of Euro 2020 after sustaining a thigh injury in England's win over Austria on Wednesday.

The right-back pulled up during the latter stages of England's 1-0 win over Austria at the Riverside Stadium and was helped off the field of play by England's medical staff.

Scans on Thursday confirmed the Alexander-Arnold has suffered a tear in his quadriceps which will rule him out of the tournament and he has now returned to Liverpool for treatment.

The 22-year-old is expected to be out for four to six weeks before he can resume training, and Liverpool will be hopeful he will be fit for the start of the next Premier League season.

Gareth Southgate will not confirm a replacement for Alexander-Arnold until after Sunday's warm-up fixture against Romania, also at the Riverside Stadium.

England's first Euro 2020 game is against Croatia next Sunday, June 13, at Wembley.

Alexander-Arnold inclusion in Southgate's 26-man squad for this summer's tournament was one of the biggest topics of debate in the build-up to Tuesday's announcement.

Ben Godfrey, Jesse Lingard, Aaron Ramsdale, James Ward-Prowse, Ollie Watkins and Ben White were among those in the provisional 33-man squad that did not make the final 26. Striker Mason Greenwood was ruled out of the tournament with a groin issue.

Jordan Henderson (groin) and Harry Maguire (ankle) are continuing to be monitored by England's medical staff ahead of the tournament, while Jack Grealish played 71 minutes against Austria before being brought off as he continues his return to full fitness after suffering from a shin injury.

Alexander-Arnold, who has earned 13 caps to date, was selected for England's squad at the 2018 World Cup and now the defender has been denied a chance to feature at his second major tournament.

The Liverpool academy product returned to form in the final games of the season for his club, as Jurgen Klopp's side won their last five in the Premier League to secure a third-placed finish and Champions League qualification.

'Huge blow for Trent, Godfrey a good option for Southgate'

"It was written pretty plain and simple on his face last night. He knew that this was not an injury he was going to recover from within the space of 10 days. He knew, Gareth Southgate knew and I think all his team-mates knew.

"The scan on Thursday was to reveal the extent of the injury and see how long he would be out for, the FA medics have been in constant contact with the Liverpool medical team as well and he has now left the camp and is back in the care of his club.

"It is a huge blow for Alexander-Arnold. If you take yourself back to the World Cup of 2018, he was called up by Southgate having played just one game for the senior side.

"He's won the Champions League, he's won the Premier League, there has been so much debate about Alexander-Arnold heading up to the tournament he was on all of the back pages.

"He was quite upset according to Southgate about the comments and headlines that were coming his way as to whether he should or shouldn't have been in the squad.

"Southgate took him to one side and reassured him that he was part of his plans and that he was taking four right-backs.

"So it looked like all that had been dealt with and that he could focus on the tournament and then in the 88th minute in the penultimate game before the tournament he strains his thigh muscle with nobody near him.

"He walked off by the tunnel and was very close to tears. He knew then what we know now, it's a huge blow for him and Southgate.

"My gut feeling is that Ben Godfrey has a really strong chance of making Southgate's squad of 26. 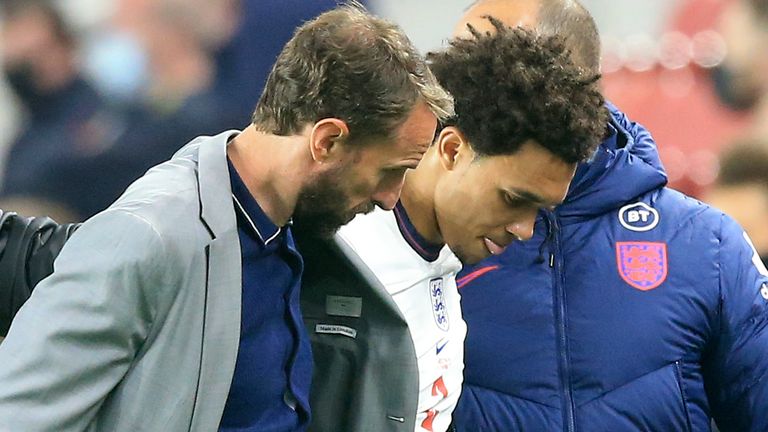 Gareth Southgate faces a difficult decision on who to select to replace Trent Alexander-Arnold in his Euro 2020 squad as he is gifted with 'quality' options, says former England defender Steve Howey

"When he was named in the provisional 33 it raised a few eyebrows, but Southgate was honest about the possibility that Maguire could be unavailable and so he needed centre-back cover.

"Godfrey has played at right-back for Everton this season, seven of his last 50 matches have been in that position. 13 of those also came at left-back which shows how versatile he is.

"So if Southgate wants to replace Trent and still provide cover at centre-back then Godfrey is a really good option."