Mason Mount and Ben Chilwell trained away from their England team-mates on Saturday as they continue to go through their individual programmes; the Chelsea duo are self-isolating after contact with Billy Gilmour, who tested positive for Covid-19 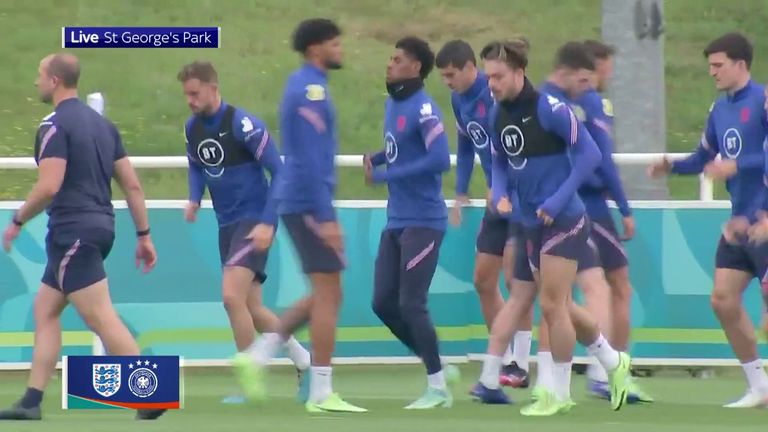 Mason Mount and Ben Chilwell are continuing to train alone ahead of England's Euro 2020 last-16 game against Germany on Tuesday, despite the FA's hopes that they could re-join the rest of the squad.

Mount and Chilwell have been forced to train privately at St George's Park this week after coming into close contact with Chelsea team-mate Billy Gilmour, who later tested positive for Covid-19.

The pair have been instructed to self-isolate until midnight on Monday, but the FA had been exploring the possibility of them training with the squad - while keeping to social distancing rules - before then.

However, neither Mount nor Chilwell were with the rest of the England squad in training on Saturday as they prepare for their Wembley fixture with Germany.

They trained away from the group, on a different part of St George's Park, going through their individual programmes with the England trainers.

The other 24 players in the squad were present and are available for Tuesday, including Declan Rice - a close friend of Mount - who on Friday suggested he and Chilwell could return to group training this weekend.

He said: "I spoke to him yesterday [Thursday] - he tested negative again. 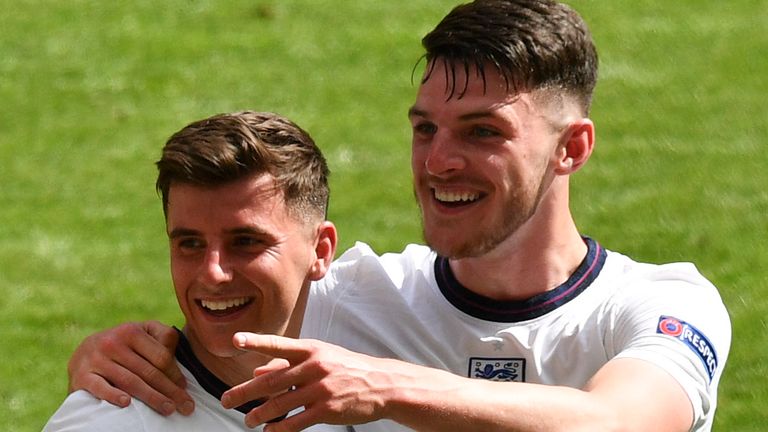 Declan Rice jokes that he has been a 'lost soul' without the company of England team-mate Mason Mount, who has been self-isolating

"He's been keeping himself fit in the room by doing the bike and what not, but hopefully we can have him out, I think maybe tomorrow or the next day, obviously with the negative test.

The FA was understood to be looking into whether training conditions during Project Restart - when Premier League players trained in small groups at a safe distance when returning from the Covid-enforced shutdown last year - could provide a path for Mount and Chilwell's early return.

However, it now appears the Chelsea duo will be forced to remain apart from their team-mates until Tuesday, the day of England's clash with Germany.

They came into contact with Gilmour during a conversation following England's 0-0 draw with Scotland in Group D last week, and were forced to miss the 1-0 win over the Czech Republic on Tuesday.

Mount played all 90 minutes against Scotland and in England's opening Group D victory over Croatia, while Chilwell is yet to feature in the tournament.

It has not quite caught fire for the England team so far, but it certainly will do with this game coming up. The excitement will be there for sure. I went to two of the group games; I went to the first against Croatia and there was a good feeling about it and we did enough to get the win. In the Scotland game, the players looked incredibly nervous, and the Czech game to a certain extent was slightly better, but you could still see there was a little bit of anxiety and caution in our play that I do not really like to see too much.

But having been part of a Euros squad, I know what the expectation is like and you could see the fear in some of the England players in that performance against Scotland.

Germany have a big ego - like we have with the England team - so we will want to play on the front foot and attack. It should be a really open, good football match, which in theory should suit us more.