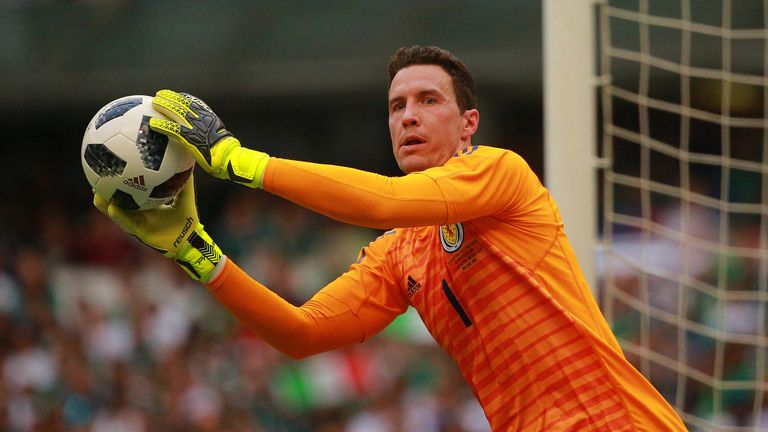 Scotland manager Alex McLeish is happy with his goalkeeping options, despite Allan McGregor retiring from international duty and Craig Gordon being out injured

Scotland manager Alex McLeish believes the positive end to their Nations League campaign can boost their chances of qualifying for Euro 2020.

McLeish's side begin their qualifying campaign with away games against Kazakhstan and San Marino as they look to make it to their first major tournament since the 1998 World Cup.

Scotland beat Albania 4-0 away before defeating Israel 3-2 at Hampden Park in November to secure Nations League promotion along with at least a play-off spot for Euro 2020.

McLeish is now keen for his players to build on that positive momentum in their upcoming double-header.

"Our mentality should be improved after the Nations League," he told Sky Sports News.

"We finished on a very good note at Hampden. At 3-2 up [against Israel] I can imagine people at home and pundits saying, 'they'll no do it', but we did it and that should empower them.

"We want them to express themselves but we want to be organised and make sure Kazakhstan and San Marino don't get chances against us."

McLeish has one key problem to solve after goalkeeper Allan McGregor retired from international duty with Scotland in order to concentrate on his club career with Rangers.

Celtic's Craig Gordon is currently out injured, leaving McLeish with diminished options in the position but he believes they have enough strength in depth to cope.

"Jon McLaughlin is on a mission to get Sunderland back into the Championship," added McLeish. "They've had a couple of bad years but John's form has been exceptional.

"Jordan Archer had a time out but now he is back in every single week and Millwall's fortunes are turning a little bit also.

"Scott Bain has taken over from Craig Gordon, who would have been one of our choices had he not been injured.

"We've got three tremendous goalkeepers and it's there for somebody to grab that chance."