Nunez scored 34 times in all competitions for Benfica last season; Liverpool have now agreed a deal worth up to €100m​​​​​​​ (£85m) for the striker; Manchester United were also interested in the 22-year-old Uruguay international

Liverpool have pipped a raft of powerhouse clubs to the signing of Benfica striker Darwin Nunez - but why is the forward in demand?

The Uruguay international scored 34 times for Benfica last season in all competitions, including goals in both legs of the club's Champions League quarter-final defeat to Liverpool in April. 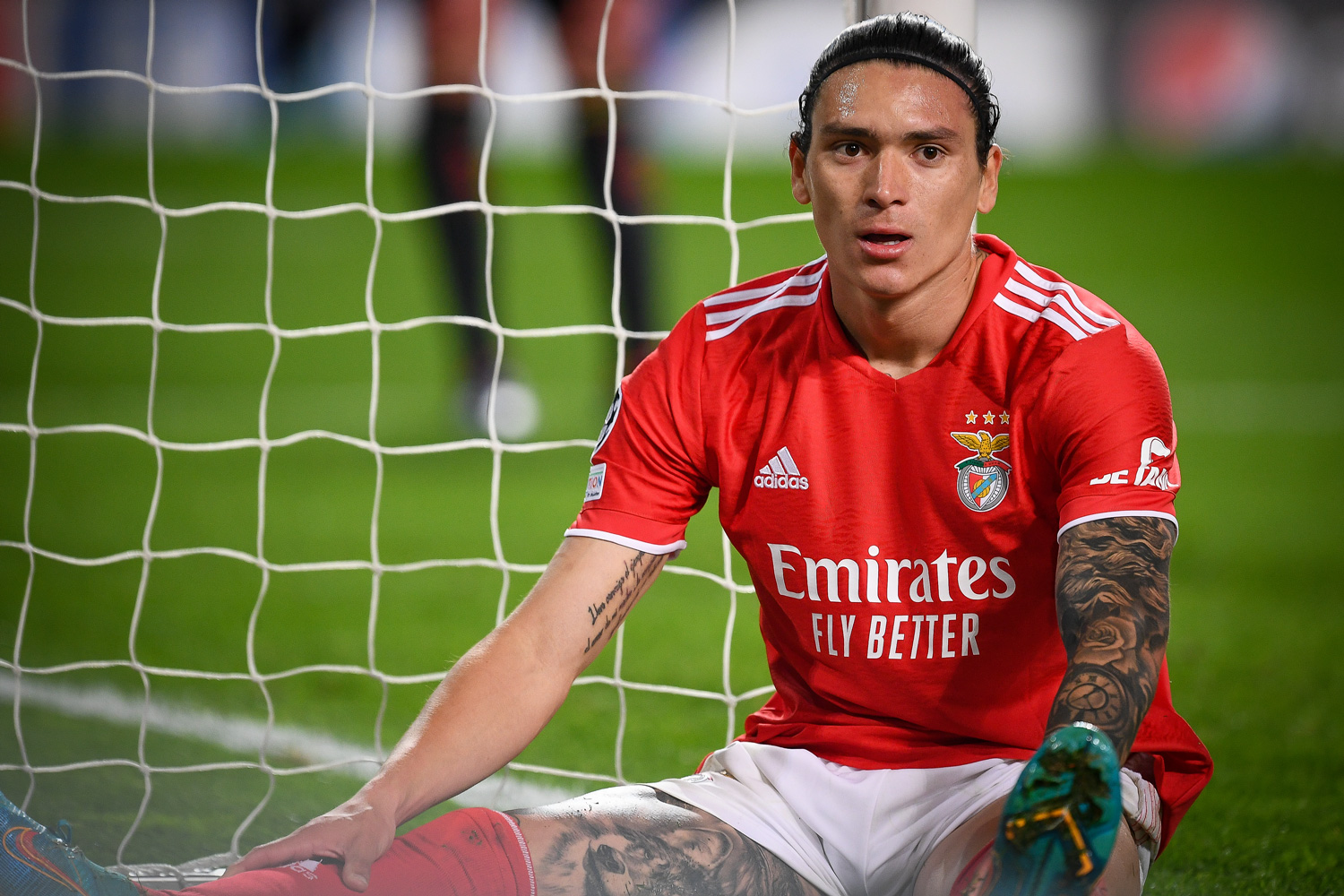 Benfica striker Nunez was Liverpool's No 1 transfer target this summer, with doubts over the futures of Sadio Mane and Mohamed Salah

A whole Klopp of praise

Speaking in April, Jurgen Klopp seemed to have his eye on Darwin Nunez after Benfica met Liverpool in the Champions League

Jurgen Klopp was full of praise for Nunez after facing the 22-year-old across two ties in the Champions League back in April. "A good looking boy, huh? And a decent player as well!" joked the Liverpool manager.

"Really good, really good. I knew before, of course, but he played pretty much in front of me with his tough battles with Ibrahima Konate.

'He was physically strong, quick, was calm around his finish. Good, really good. I always say in these situations if he is healthy, it's a big career ahead of him."

So what's the fuss about?

Nunez led the way for goals and conversion rate for players taking 20 or more shots in the Primeira Liga last season. In 2020/21, the Uruguay international ranked joint-second for assists, while in 2019/20 he finished joint-fourth for goals with Almeria in the Spanish Segunda.

The radar below compares his strengths with other forwards in Europe's top leagues and reveals the extent of his qualities, ranking among the top five per cent for goals, headed goals, shots on target, big chances created, dribbles attempted and touches in the opposition box. 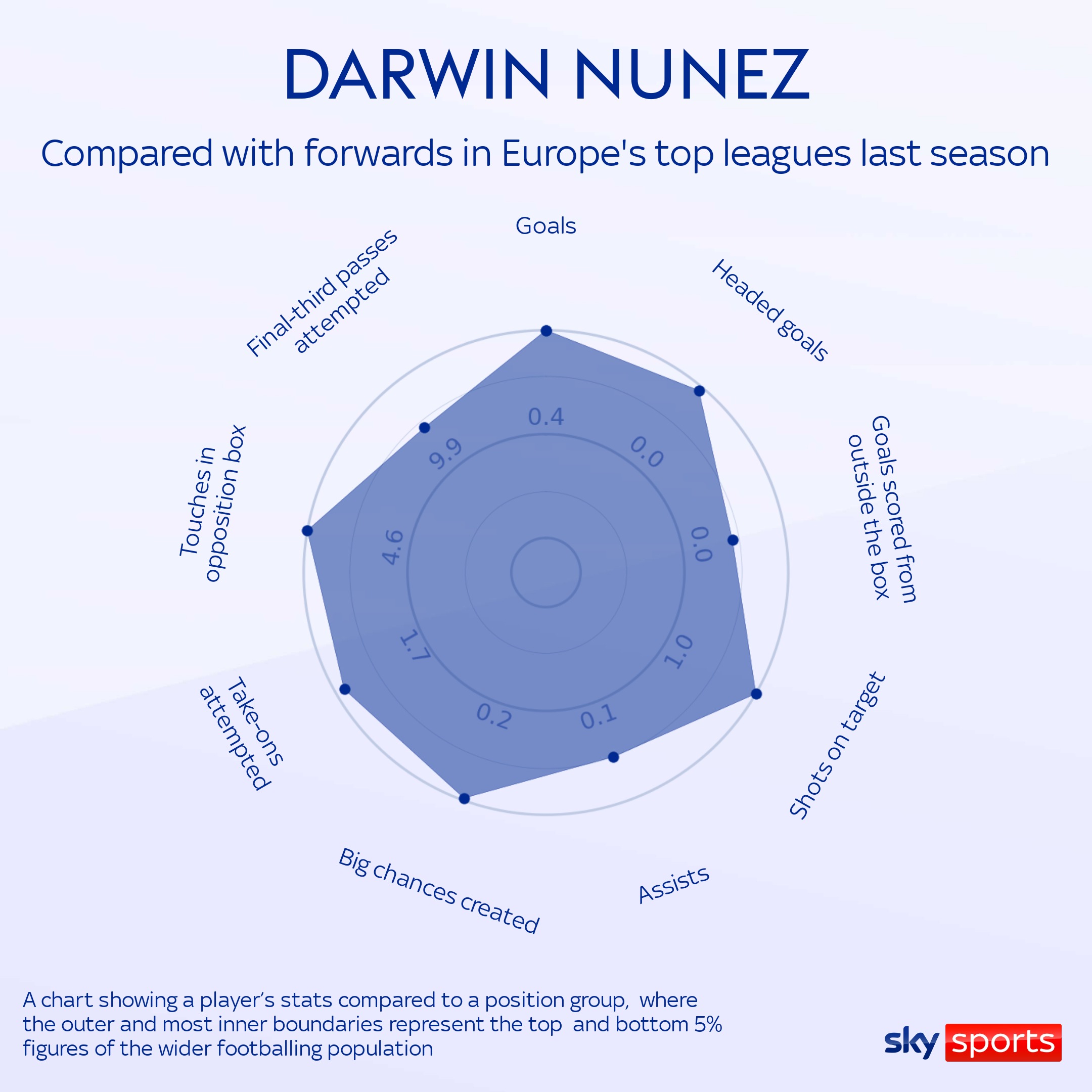 The goals flowed last term and the numbers are beyond impressive: 26 goals from just 1,986 minutes equates to a ratio of more than one goal per game. He fired 85 shots at goal and that also converts into a league-topping conversion rate of 30.6 per cent.

Nunez also offers longevity at just 22 years of age. When factored against every under-22 player across the Primeira Liga and Europe's top five leagues last season, the Uruguay international leads every single player for goals and shots on target per 90 minutes - surpassing even new Manchester City striker Erling Haaland.

Nunez also provides versatility in abundance, typically starting on the left flank or up top for Benfica last term - identical positional fluidity to Mane and Diogo Jota at Liverpool. 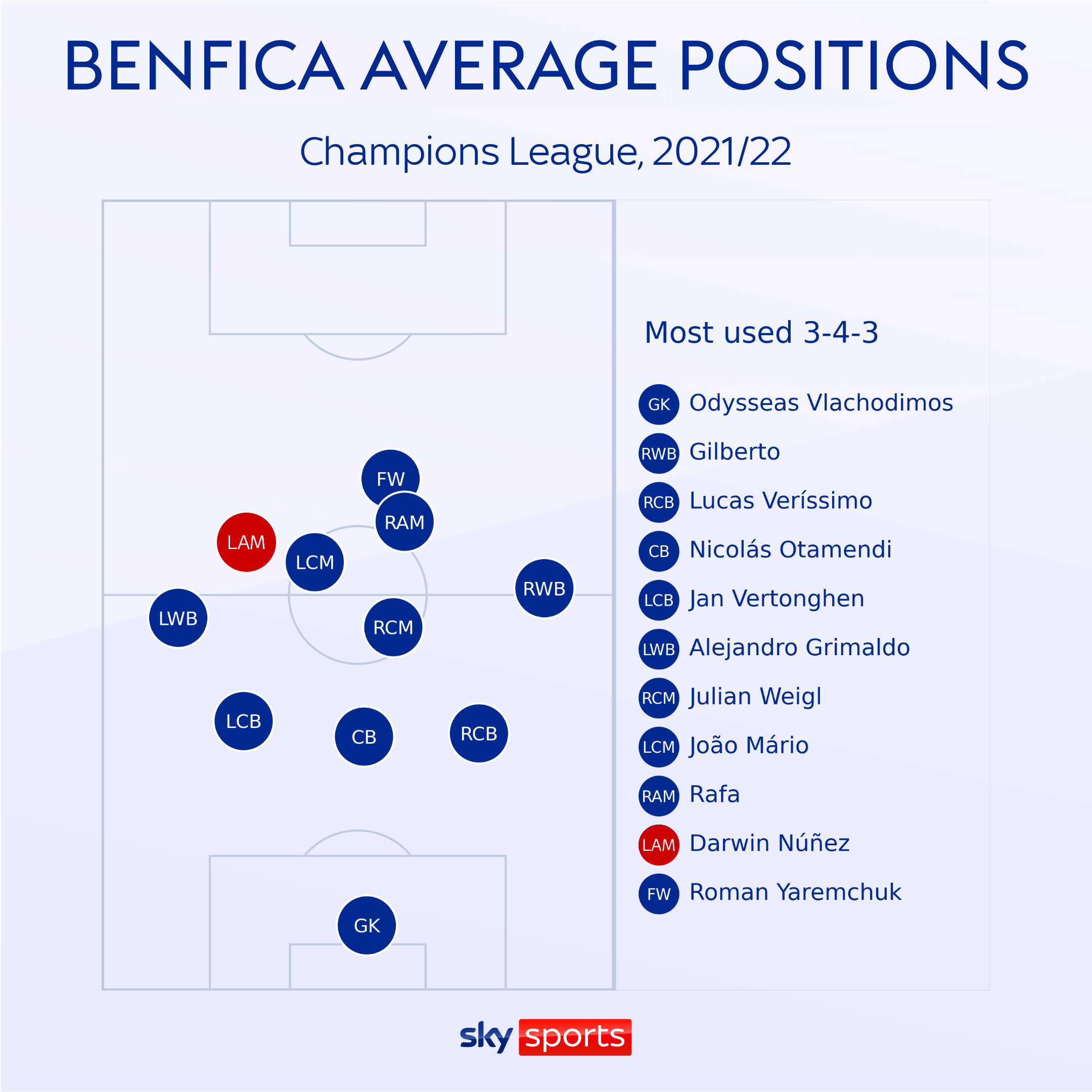 His unconventional, adaptive style would certainly suit Klopp's philosophy at Liverpool and the visualisations below reveal how Nunez also frequently tracks back and can combine with players across the pitch when adopting varying roles.

Indeed, the Liverpool manager experienced this first hand when facing Nunez at Anfield. The heat maps below show how the Nunez switched roles in the second half, moving from patrolling a right-of-centre area to the left flank.

The touch map below highlights different attacking attributes according to colour across his Champions League campaign last term and provides additional evidence of his ability to drive his team upfield from deep and his balanced effectiveness across the final third, while firing a substantial number of crosses from wider angles. 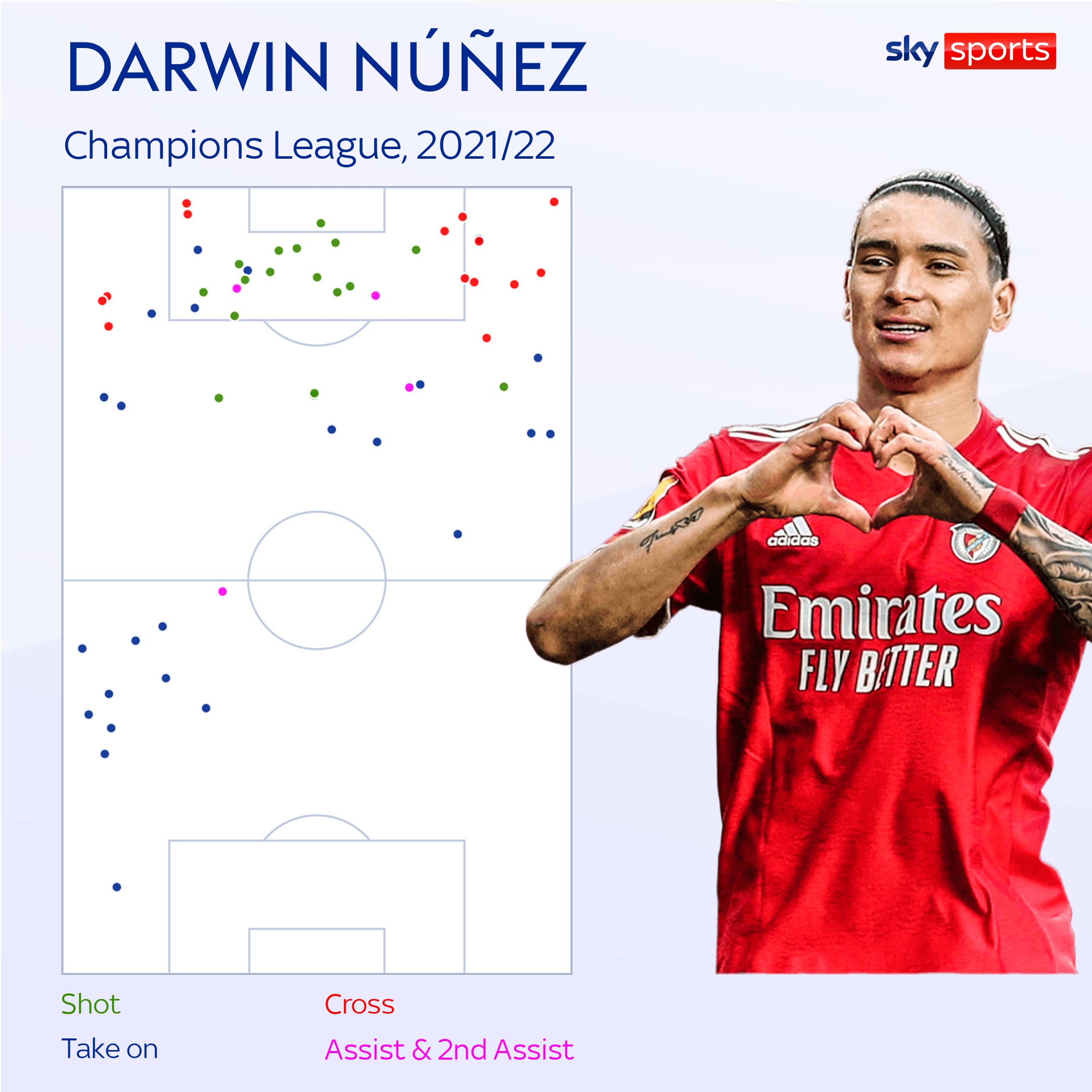 In terms of attempts on goal, Nunez is not shy from firing an attempt from range but has a knack of finding the target, and the back of the net, from the left-of-centre area - an area Mane dominates in the current Liverpool set-up.

As the graphic above indicates, Nunez actually clocked four secondary assists during his European campaign last season but the visualisation to the right below shows passes leading directly to a shot and suggests he typically lays off short passes inside the opposition box but can also find team-mates from outside the area.

Other areas of his game

That endeavour is best visualised with the pass map below, revealing an array of long, ambitious passes that often go amiss but, also, occasionally break defensive lines. The high frequency of long passes contribute to a below-average accuracy, but his successful, raking distribution in central areas would offer Klopp another dynamic against low-block opposition.

Diaz arrived at Liverpool from Portugal's top flight with a reputation of pressing from the front and still ranks 27th in the division for possession won in the final third last season - despite leaving the club in January.

Nunez is nearly half as effective as the Colombia forward in that area, which, perhaps, highlights one potential area for improvement if he were to sign for Liverpool - given Klopp's high-press and intense style of play. 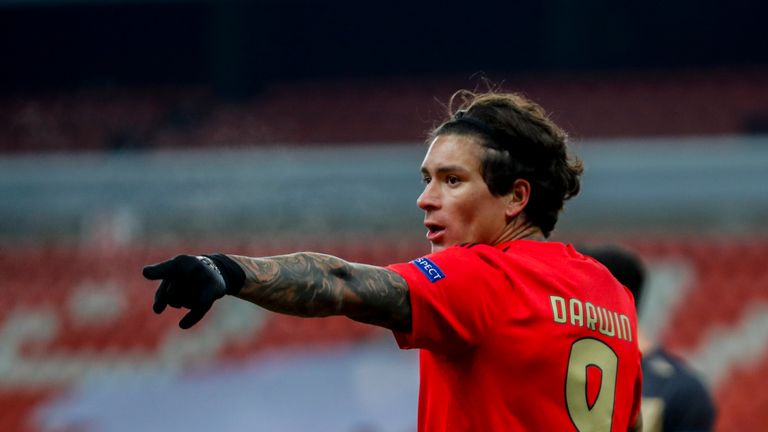 "When you talk about a player like Nunez, you think about a typical No 9 that plays inside the penalty area. But he can easily play out wide to break spaces for other players in the central areas if teams need him. It's a very good deal for Liverpool, who already used the Portuguese league with Luis Diaz in a massive transfer which the winger completely deserved.

The making of Darwin Nunez

Meet Darwin Nunez, the Uruguay forward set for a big move from Benfica - and his former coaches are backing him to star in the Premier League.

Sky Sports feature writer Adam Bate speaks to those who have followed his journey from the start to find out more.

Which positions are Liverpool targeting this summer?

It makes sense with Mohamed Salah and Roberto Firmino entering the final year of their contracts while the potential departure of Sadio Mane, who has also got one year left on his deal, and Divock Origi having already decided to go, makes reinforcements in that area a priority. If Mane is to leave, Liverpool will only look to do business for a fee above the €30m that's been quoted and they would want a replacement sorted before allowing him to go.

With Fabio Carvalho due to officially start his Liverpool career on July 1, any further overhaul in midfield could depend on the futures of Alex Oxlade Chamberlain and Takumi Minamino. Oxlade Chamberlain made 29 appearances in a 63 game season and hasn't played since the FA Cup win over Forest in March, while Minamino made just 24 appearances and both could look for more regular first-team opportunities. Oxlade Chamberlain is another player with just one year left on his contract.

Strengthening the back-line does not appear to be a priority with Ibrahima Konate offering another option to Joel Matip and Virgil van Dijk while Joe Gomez is able to cover right-back and centre-back.