Accrington's Sky Bet League One match against Blackpool postponed due to frozen pitch.

Heavy snowfall across the UK has already seen a number of sporting fixtures postponed with further disruption expected across the weekend.

The Met Office issued a yellow warning for snow and ice, as temperatures in the UK fell to their record lowest in seven years at -15.4C on Friday.

Accrington's Sky Bet League One match against Blackpool has been postponed because of freezing conditions following a pitch inspection on Saturday morning.

Volunteers had been asked to turn up from 8:30am help clear the snow from around the Wham Stadium, with the covers taken off the pitch.

However, following an inspection, referee Rob Lewis said it was "unplayable due to the freezing weather overnight".

Crewe vs Carlisle in Sky Bet League Two has been postponed due to a frozen pitch as has Swindon vs Forest Green, Port Vale vs Tranmere and Cheltenham v Cambridge.

Oldham's home game against Morecambe in League Two was another match that failed to beat the weather.

A statement on Oldham's website said: "The referee has deemed the pitch unsafe to play on due to the weather.

In Scottish League One, Stranraer's game against Stenhousemuir has been postponed and will now be played at 7.45pm on Tuesday February 5.

Elgin vs Queen's Park, Cowdenbeath vs Peterhead, Elgin City vs Queen's Park and Stirling Albion vs Clyde have all been called off due to snow and frozen pitches.

The FA Trophy clash between Spennymoor Town vs AFC Telford has also been moved due to snow.

David Beckham's scheduled appearance at Salford City has been cancelled due to the postponement of their fixture against Maidstone United.

In rugby union, Newport vs Llanelli has been called off due to a frozen pitch.

Wales' preparations for their Women's Six Nations clash with France have been affected after their flight to Paris was cancelled.

They were due to depart Cardiff Airport on Friday on the 9:30am flight to Charles de Gaulle ahead of Saturday's clash but the snow in South Wales cancelled all morning departures leaving them stranded.

The cancellations have also affected the fans who are trying to get to Paris, among them former captain Sam Warburton. 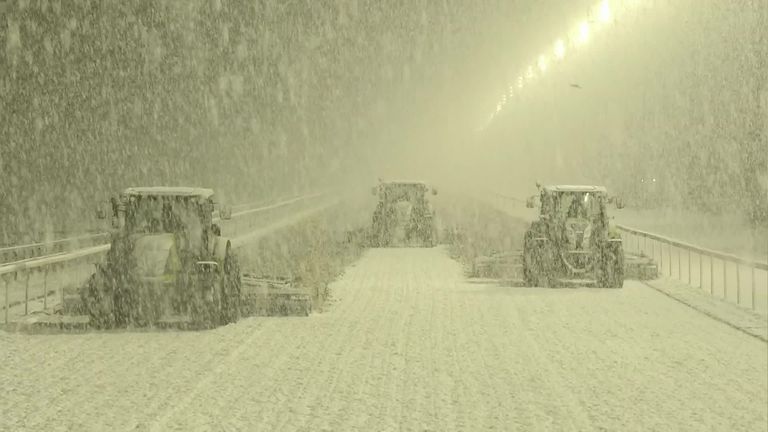 An inspection at Newcastle Racecourse prior to the sixth race on Friday evening saw the meet cancelled amid heavy, settling snow

"At least one flight managed to get out this morning, so there will be some fans there," Warburton told Wales Online.

"Hopefully, I will get there in time on the Eurostar, and get to Paris safe and sound hopefully.

"It is the fans I feel sorry for who have paid for flights and accommodation. Hopefully they can get an alternative route to get out to support the boys tonight."

In racing, the meeting at Newcastle was abandoned after five races due to snow.

Wetherby's Saturday card, featuring the Towton Chase, is the latest to be lost to the current cold snap.

More postponements and cancellations are expected as inspections are carried out over the weekend.