Sergio Aguero, Man City's record goalscorer with 260 goals, is departing the Etihad after a decade at the club; Argentina forward joined from Atletico Madrid in 2011; injuries and illness restricted his appearances in final season at City; 32-year-old unveiled by Barca on Monday

Sergio Aguero is joining Barcelona from Manchester City on a deal until the end of the 2022/23 season and was unveiled at the Nou Camp after signing his contract on Monday.

The forward was presented in a Barca kit and greeted the media on Monday evening after completing a medical in the afternoon prior to signing a two-year deal.

Aguero will move to Barcelona on a free transfer but the Catalan club have said Aguero's buyout clause is set at €100m (£86m). He will officially become a Barcelona player on July 1 after his City contract expires. 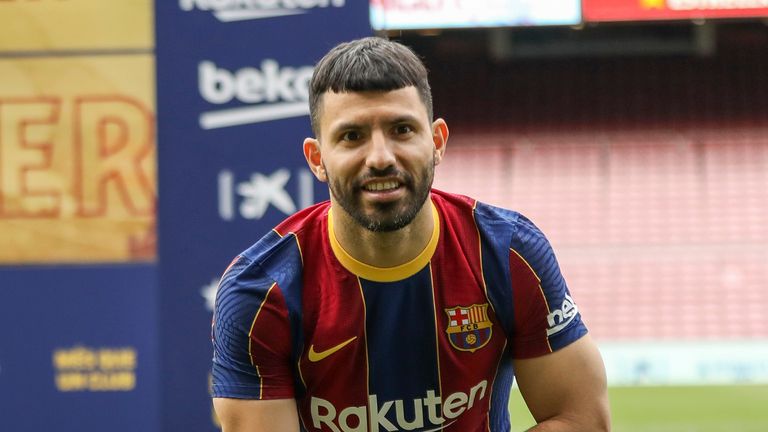 Aguero's departure from the Etihad was announced at the end of March after Pep Guardiola informed City's record goalscorer of the club's decision not to renew his deal.

The 32-year-old, who was signed from Atletico Madrid in 2011, has been restricted in his appearances this season due to injuries and illness.

'Barca best club in the world - it's a step forward'

Upon his arrival at the Nou Camp, he said: "We all know that Barcelona are the best club in the world so I think I made a great decision to be here and I hope to help the team.

"Of course it is a step forward in my career and hopefully I can help the team win things. I want to play and help this squad, and if the team does it well, I will be happy individually.

"I want to send a big hug to everyone, to all the supporters I will try to give my best and hopefully the fans will enjoy my skills. They enjoyed me in other shirts but now I am here.

"I have changed a little bit. When I arrived in Europe to Atletico Madrid at 18 years old, I learned a lot, then I played for Manchester City in the Premier League.

"Now I have changed my way of playing, but I have an idea of where I can play and I will try to help my team-mates with my experience."

Aguero, one of the most influential players in City's history, leaves the club after winning five Premier League titles, one FA Cup, and six League Cups.

Despite helping City reclaim the league title this season, Aguero bowed out after coming on as a substitute against Chelsea in the Champions League final, which his side lost 1-0 at the Estadio Do Dragao in Porto. 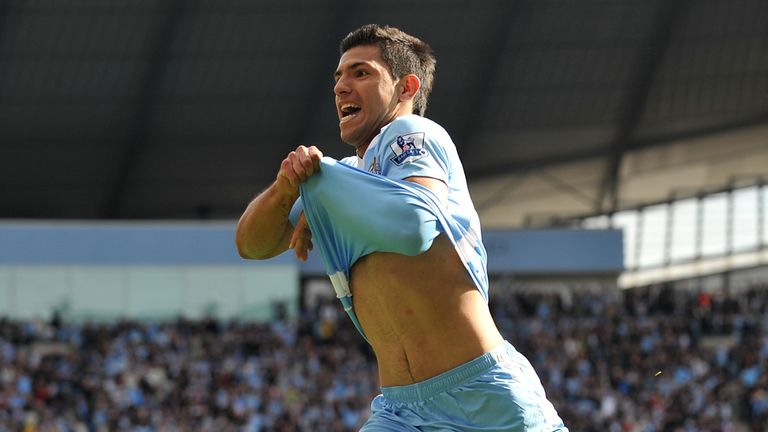 Relive the greatest moment of Aguero's Manchester City career, winning the title with the last kick of the 2011/2012 season

City confirmed the move in their own statement and thanked Aguero for his "incredible contribution".

"Sergio Aguero will join Barcelona when his Manchester City contract expires at the end of June," City said.

"In March it was confirmed a statue of the City striker has been commissioned to stand alongside those currently in work to honour David Silva and Vincent Kompany. His legend will further be marked by the installation of a dedicated and permanent mosaic at the City Football Academy. "Everyone at Manchester City would like to take this opportunity to thank Sergio for his incredible contribution to our success over the last decade and wish him well on the remainder of his career."

The Argentina international scored 260 goals in 390 appearances in all competitions under Roberto Mancini, Manuel Pellegrini and Guardiola, and leaves as the fourth-highest goalscorer in Premier League history and as City's all-time record scorer. With Aguero leaving Manchester City for Barcelona, here are his best Premier League goals for the club

Guardiola had paid an emotional tribute to Aguero after the striker's double on the final day of the Premier League season against Everton, saying: "We love him so much - he is a special person for all of us. We can not replace him." Eric Garcia is expected to follow Aguero in joining Barcelona this summer. The defender is a product of the La Masia academy and Guardiola brought him to the Etihad in 2017, but he made just six top-flight appearances this season.

Barcelona won the Copa del Rey but missed out on the La Liga title this season, finishing seven points behind league winners Atletico.

Aguero will link up with long-time Argentina team-mate Lionel Messi at the Nou Camp. Joan Laporta, the club's president has said he is "moderately optimistic" over the prospect of Messi signing a new contract, while the Spanish club are also confident of securing the services of Georginio Wijnaldum, who appears set to leave Liverpool.

Meanwhile, Guardiola says he is planning on staying at City for the long term because the club "gives the manager everything he needs", after the Spaniard guided the club to a third Premier League triumph under his tenure. "It is not the same Aguero which shone for Manchester City a few seasons ago or even the one which played for Atletico Madrid here in La Liga.

"Barcelona have learned an important lesson. Last year they thought that Luis Suarez was not fit enough and was not a good striker for an important club.

"With Aguero 33-years-old next Wednesday, the feeling is that maybe he is not the person he was five or six years ago but that he can have an impact in two years at the club. 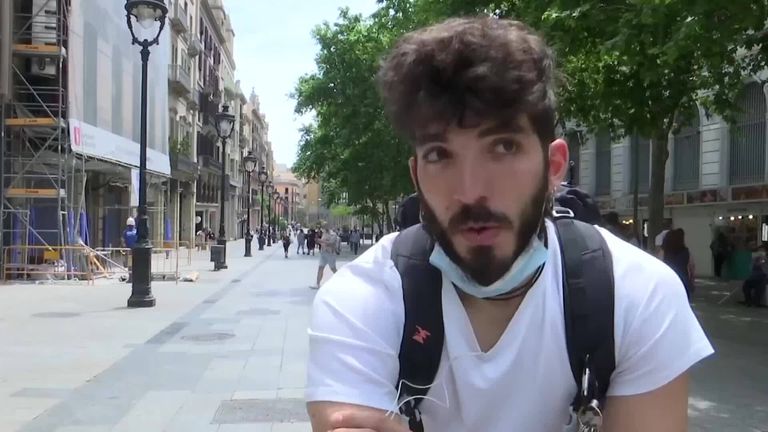 "They believe that the Argentinian is better than many strikers who have arrived over the last few seasons.

"No one wants to pay such a huge wage to Lionel Messi and it seems that the arrival of Aguero, one of his best friends in the world of football and close friends for the last 16 or 17 years, could be a huge step to make Messi stay at the club."