Chelsea were crowned European champions for the second time as Kai Havertz's first-half strike sealed a 1-0 victory over a lacklustre Manchester City in Porto.

Thomas Tuchel's side, who lost Thiago Silva to injury in the 39th minute, were sent on their way just before half-time as Mason Mount's superb pass picked out the run of Kai Havertz (42), who rounded Ederson and calmly finished into an empty net for his first Champions League goal.

Man City, who picked an extremely attacking line-up, were far from their fluent best and their task was made even more difficult when Kevin De Bruyne was forced off because of a head injury in the 60th minute.

After substitute Christian Pulisic missed a guilt-edged chance to wrap up victory, City turned to Sergio Aguero for one final time, but an equaliser proved elusive as Chelsea, who defended heroically, held on for a third straight win over City to end their season on a high.

The victory banished memories of their FA Cup final disappointment earlier this month and seals their first piece of silverware under Tuchel, who replaced Frank Lampard back in January.

How Chelsea sealed a third straight win over Man City...

The game caught fire early on and it was City who created the first opening, Ederson measuring a perfect long ball over the top for Sterling, but the England international's first touch let him down, allowing Reece James to get back and get a foot to the ball. It forced Sterling wide and Edouard Mendy was out quickly to make a block from a tight angle.

Guardiola's line-up was clearly designed with attack firmly in mind, but it did leave them exposed at times without the ball and Chelsea created two good early chances on the counter. Both fell to Timo Werner, but he was unable to convert either, first missing his kick in front of goal after being picked out by Havertz's cut back before hitting a low strike straight at Ederson.

At the other end, City started to find some rhythm and De Bruyne looked to have laid the ball on a plate for Phil Foden, who was just about to get his shot away when Antonio Rudiger slid in with a goal-saving sliding tackle.

Chelsea then suffered a blow when Silva landed awkwardly and appeared to pick up a groin injury. He tried to continue but was eventually forced off in the 39th minute and replaced by Andreas Christensen.

Man of the match: N’Golo Kante

However, Tuchel's side brushed off the disappointment of losing the Brazilian to take the lead three minutes before the interval.

Mount's brilliant pass carved opened up the City defence and released Havertz. Ederson rushed out to meet him at the edge of the area and got a touch but the German forward kept his composure to regain possession and roll the ball into the empty net. 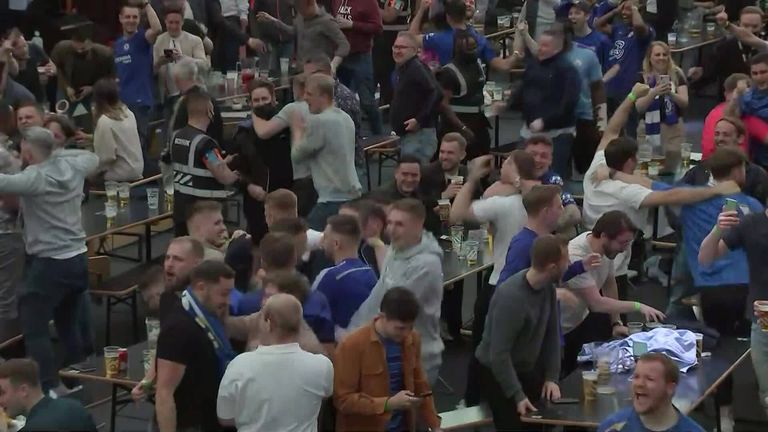 After a brighter start to the second half, City's hopes of getting back into the game were dealt a huge setback just before the hour when De Bruyne was forced from the field after taking a blow to the head following a collision with Rudiger.

The Belgian left the field in tears as Gabriel Jesus came on in his place and it almost got even worse for City when substitute Pulisic, who looked certain to double his side's lead, chipped the ball over Ederson but wide of the far post after another swift Chelsea breakaway.

Man City turned to Sergio Aguero for one final time with 15 minutes remaining and they were inches away in the dying stages of seven minutes of stoppage time when Riyad Mahrez's strike left Mendy stranded, but the ball went narrowly over.

There was to be no fairy-tale ending for Aguero, who is set to leave City this summer, as Chelsea held on to take Europe's biggest prize back to west London. 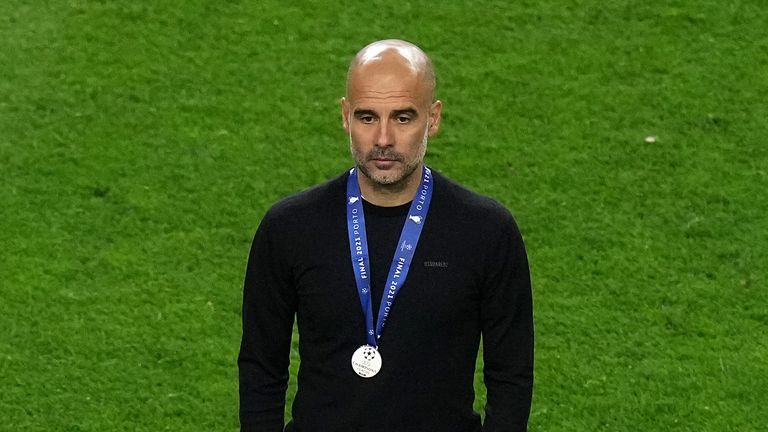 Pep Guardiola insists he picked the Manchester City team he thought was best equipped to win the Champions League final against Chelsea.

Man City boss Pep Guardiola: "It's an exceptional season we've had. It's an honour to be here. In the second half we were brilliant and brave. But they defend so strong and are so fast on the counter-attack. We will come back maybe one day again. I did what was best for the team [on selection].

"He [Kevin De Bruyne] was injured but this happens. In these kind of games, we need everyone. The ambition now is to the rest, and then game by game we will come back and hopefully return to this stage in the future."

Chelsea boss Thomas Tuchel: "To share it with everybody is incredible. We made it. Wow. I don't know what to feel.

"I was so grateful to arrive a second time [in the final]. I felt different. We were somehow... You could feel it getting closer.

"The [players] were determined to win this. We wanted to be a stone in their shoe. We encouraged everybody to step up and step out, to be more brave and create dangerous counter-attacks." 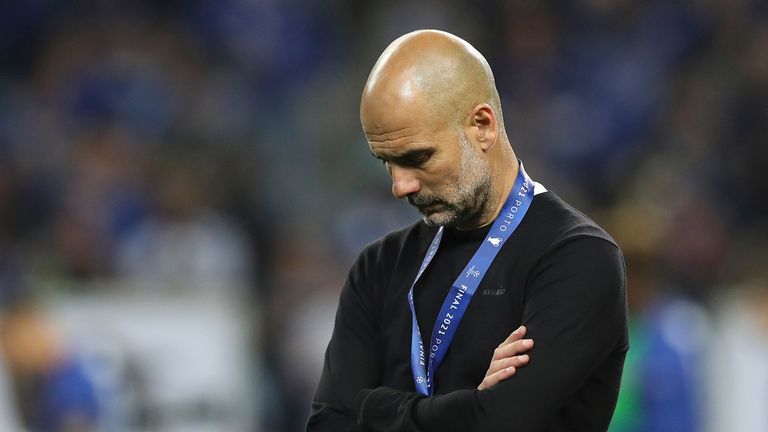 Manchester City fans have their say on the Champions League final defeat to Chelsea in Porto. 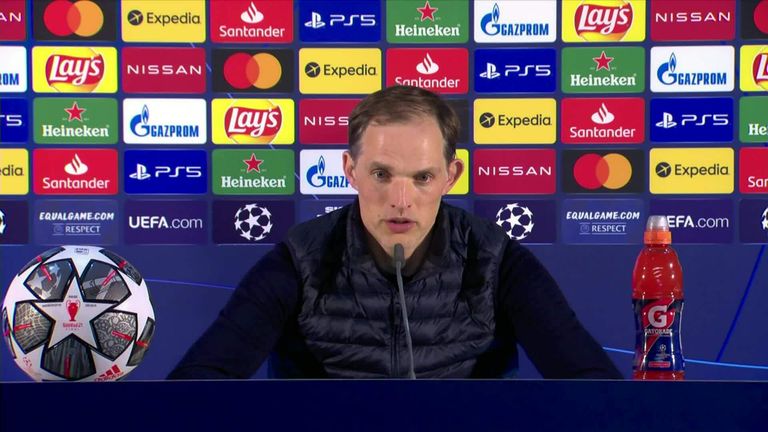 Kai Havertz: "I don't know what to say, it's an incredible feeling. We deserved it and now we celebrate. I waited a long time [Havertz had never scored previously in the Champions League], and now I've done it. I just want to thank my family, my parents, my brother, my sister, my grandmother, my girlfriend. They're here in the stadium. I worked 15 years for that moment and now it's happened."

Cesar Azpilicueta: "This means a lot. I came here in 2012 after the Champions League win and of course I wanted to repeat that. Tonight it's just amazing. My family is here and it's just a special day."

Ben Chilwell: "We fought so hard today. We knew it would be a tough game. The second half... we fought for our lives to get to this moment, to have this feeling. This is what I came to Chelsea for. It's a dream come true."

Mason Mount: "I can't put it into words. It's impossible. I just mentioned then that I've played in two finals for Chelsea and we lost them both. The way that hurt... It's all I've dreamt winning a trophy with Chelsea. To go all the way in the Champions League. We played some tough teams. We are in a final and we won it. It's such a special occasion. At this moment in time, we're the best team in the world. You can't take that away from us!" 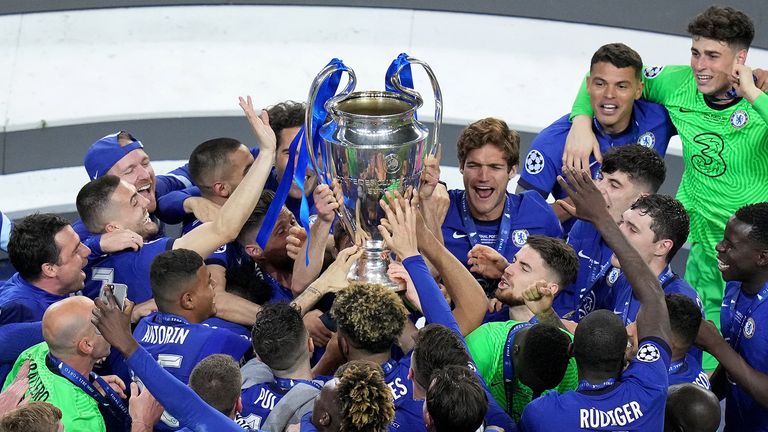 Sky Sports News' Ben Ransom reports from outside the Estadio do Dragao in Porto after Chelsea beat Manchester City 1-0 to win their second Champions League title.

Man of the match - N'Golo Kante

Looking to add a Champions League win to his collection, Kante showed no sign of the injury that hampered his preparations for this game.

Full of energy as ever, The France midfielder was able to join the attacks and he even headed wide from close range. He was also so quick to break things up when required.

It was an outstanding all-action display.