Romelu Lukaku said he was unhappy with his role at Chelsea and would like to return to Inter Milan in the near future during a Sky Italy interview aired this week; Watch Chelsea vs Liverpool, live on Super Sunday on Sky Sports Premier League from 4pm; kick-off 4.30pm 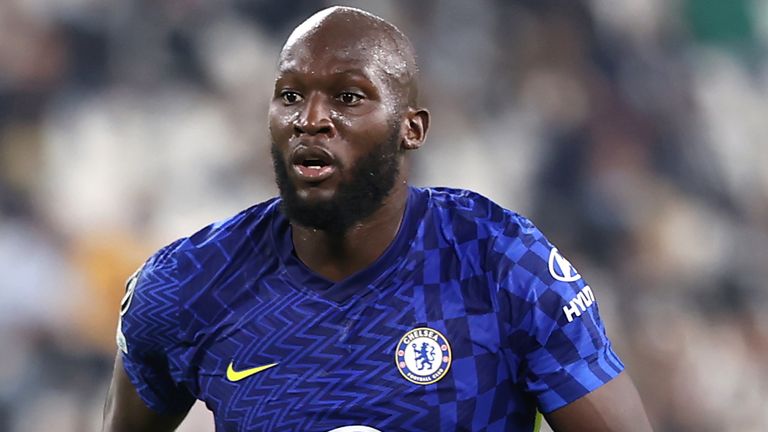 Gary Cotterill reports that Romelu Lukaku has been left out of the Chelsea squad for their Premier League match against Liverpool at Stamford Bridge.

Chelsea have omitted Romelu Lukaku from their squad for the game against Liverpool on Sunday, live on Sky Sports Premier League.

In an interview with Sky Italy recorded a few weeks ago but aired this week, Lukaku said he was unhappy with his role at the club and would like to return to Inter Milan in the near future.

Head coach Thomas Tuchel said on Friday the comments by Lukaku, re-signed by Chelsea for a club-record £97.5m from Serie A champions Inter in August, are "just not helpful".

Lukaku, 28, has scored in his last two Premier League appearances - against Aston Villa and Brighton - following his return to the Chelsea squad after testing positive for Covid-19.

Lukaku told Sky in Italy in December that he was 'not happy' with the situation at Chelsea and talked up the prospect of returning to Inter.

Thomas Tuchel says comments made by striker Romelu Lukaku in a past interview about his place in the squad have not been helpful, but may have been taken out of context.

Belgium international Lukaku has scored seven goals in 18 appearances, but will now be missing for the Blues as they look to reduce the gap to league leaders Manchester City to eight points with a victory.

Earlier this season, Lukaku missed more than a month of action with an ankle injury sustained against Malmo in the Champions League on October 20.

How to follow Chelsea vs Liverpool on Sky Sports...

'Bad news on a day Chelsea need a result'

"I've checked with the club hierarchy and they say it is club policy not to comment on team news before the team sheets are out. But there is certainly no denial of the big breaking news that the fallout from Romelu Lukaku's interview with Sky Italy is the club certainly believe that it can't be left unpunished and that something needs to be done or seen to be done as well.

"It's no good, for example, dropping a player from an FA Cup tie. So, missing a big game like this would be the kind of message Thomas Tuchel would want to send to Lukaku for the fallout from that interview. We are hearing he won't be in the starting XI for this crucial game against Liverpool, but not only that, he will not be in the matchday squad either.

"There was plenty of speculation that it would be coming but it is certainly taking a hold at Stamford Bridge that it is the case, and it is another headache for Thomas Tuchel.

"Tuchel has told the club's media that catching Man City is difficult but not impossible. They are 11 points behind now after being five points ahead just over a month ago. If they lose against Liverpool and then lose at Man City the next time out in the Premier League then it will begin to look far more than just difficult. It will start to look impossible to catch City.

"So, it's not great news on a day when Chelsea know they need a result, but it is news the club feel they have to give and make public."

Lukaku was an injury concern after withdrawing from Belgium duty in early October due to "muscle fatigue", and though he then played 77 minutes against Brentford on October 16 an ankle sprain against Malmo four days later led to a spell on the sidelines.

Before the Malmo match, Tuchel had already said Lukaku was "mentally tired", blaming a dry spell in front of goal on the fact he was playing too much football.

After six games out, there were then four league matches where Lukaku was in the matchday squad, coming on as a substitute each time - against Manchester United, Watford, West Ham and Leeds - racking up 77 minutes but failing to find the target.

He started and scored in the 3-3 draw with Zenit in Chelsea's final Champions League group game, but after a brief cameo against Leeds, he then missed three matches due to Covid, against Everton and Wolves in the league and Brentford in the Carabao Cup.

The forward's first match after his return from Covid was against Aston Villa on Boxing Day, where he came off the bench at half-time to inspire a comeback 3-1 win.

Speaking to Sky Sports after the victory, Lukaku spoke of his frustration at being stuck on the sidelines.

"I think I needed a performance like this today, it has been difficult as every player wants to play," he said.

"The manager has his reasons but I kept working hard. Today it was good for us to win, and I am happy with my performance."

Meanwhile, Tuchel said Lukaku's 45 minutes against Villa went against medical advice and voiced his concerns over whether it would impact the striker's return to full fitness.

Thomas Tuchel was hugely frustrated following Chelsea's win at Aston Villa, asking why the Premier League is the only league in Europe not to allow five substitutions and winter breaks.

"He [Lukaku] had a very good performance, he was very helpful, but it's not fair," Tuchel said. "He's not ready for that even if he wants it."

"We just put the players in but we don't know [what the impact is]. He was a game-changer today.

"There is no doubt he is super-important. Romelu will be a key player. Last time he started for us was in October, not because of quality or that we have any doubts we are better without him. He is unlucky to get injured.

"When he was struggling to come back in the schedule we have, he caught Covid. It [45 minutes] was more than the fitness and medical department recommended for him but we thought we could take the risk and be more offensive."