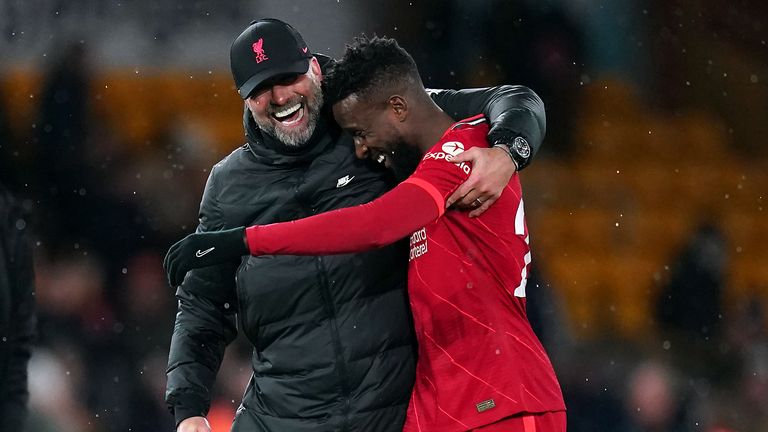 Jurgen Klopp has confirmed "Liverpool legend" Divock Origi will leave the club this summer, with the forward expected to join AC Milan when his contract expires.

Origi has earned cult-hero status since joining Liverpool in 2015 with a string of iconic goals, most notably his comeback-sealing double against Barcelona in the Champions League semi-finals and his stoppage-time winner against Everton in 2019.

But the arrival of Luis Diaz in January has only heightened the lack of first-team opportunities on offer to Origi and his quest for more regular football is likely to see him trade Merseyside for Milan at the end of the season.

"I expect Div to get a special farewell. For me, he will always be a Liverpool legend and it has been a joy to work with him," Klopp said.

"He's one of the most important players I ever had. Wherever he will go he will be successful, 100 per cent.

"It will be a hard moment when he leaves. He is a Liverpool legend, no doubt." After Klopp confirmed Origi will leave Liverpool this summer when his contract expires, we look back at the striker's six goals against their Merseyside rivals Everton

On other potential outgoings, Klopp added: "I don't want to see anyone leave but that's life. No-one has come to me and said they want to leave. It's not the time for that now.

"What happened this year is possible because of the group; world-class players. Kids played their part which was nice too.

"I have no idea who wants to go at the moment but if someone comes to me and says they have a club they want to join we will speak to the club with an offer."

"It's not yet a done deal in terms of a medical and finalising that transfer, but he hasn't made enough appearances at Liverpool to trigger the extension clause that was in his contract.

"It's just a case of putting the finishing touches to what would be a pretty iconic transfer at the age of 27, with Milan pushing to win the Italian title and get back into the Champions League, so I think that's going to happen."

Liverpool's 2-1 win at Southampton on Tuesday closed the gap on Premier League leaders Manchester City to one point and ensured the title race will be decided on the final day.

Klopp's side host Wolves on Sunday while City welcome Aston Villa to the Etihad - both live on Sky Sports - and Klopp has been boosted by the potential return of several key players.

Joe Gomez was forced off at half-time during the win at St Mary's. Mohamed Salah and Virgil van Dijk were injured during last weekend's FA Cup final, while Fabinho hasn't played since May 10.

"Joe Gomez has good news, we want a reassuring second scan. But we thought after the game we were lucky. It's just a knock," Klopp said.

"The rest of the boys look all good, what we do for the weekend, I don't know yet.

"Mo doesn't want to take any risks, no doubt about that but it looks good.

"My solution is they can play at the weekend or at least be on the bench. If not, we take it from there."

Liverpool's slim chances of completing an unprecedented Quadruple remain intact, but they will need a helping hand from former captain and current Villa boss Steven Gerrard.

However, Klopp is not expecting any special favours and is focused on making sure his side takes care of business first.

"Steven will take it seriously for sure," he said. "Aston Villa plays to win but it's a difficult place to go.

"But this is the game I am not thinking about at all. It's disrespectful to Wolves who don't want to come and be part of our celebrations. They come here and want to win."