Liverpool host Wolves on Sunday with their title hopes out of their hands; Manchester City know a win over Aston Villa wins them the title; watch the finale of the Premier League title race between Manchester City and Liverpool live on Sky Sports Main Event this Sunday; kick-off 4pm Liverpool's Trent Alexander-Arnold says the team have delivered one of the best team performances in Premier League history, irrespective of the outcome on the final day

Trent Alexander-Arnold says Manchester City have helped Liverpool become the 'mentality monsters' that have forced a potential quadruple, as both sides battle for the Premier League title on the final day.

Jurgen Klopp's Reds, who have already claimed the two domestic cup competitions this season, go into the top flight's final round of fixtures one point behind City, who know that victory over Aston Villa - live on Sky Sports - will clinch the title for Pep Guardiola's side.

And Alexander-Arnold, who became the youngest player to ever claim their first Premier League, FA Cup, Carabao Cup and Champions League titles this month, says City's relentless picking up of points have helped Liverpool treat every single game this season as a cup final.

"It's definitely down to how City are as well, I'd give a lot of that to them," he exclusively told Sky Sports when asked about why Liverpool have been so consistent in winning. "Even at the start of the season, we've known that we can only drop a handful of points then they'll match or even better that level.

"This is our third 90+ points season in four years which is outstanding and to only have one Premier League right now just shows the levels that City have.

"Every single game we've known we have to get the three points. From how it is right now, to back in September and October, it's exactly the same mentality from us to win every single game."

Even though City could ruin Liverpool's chances of winning the quadruple on Sunday by beating Villa, Alexander-Arnold admitted he enjoys watching Guardiola's side - and even described them as the best team in the world. 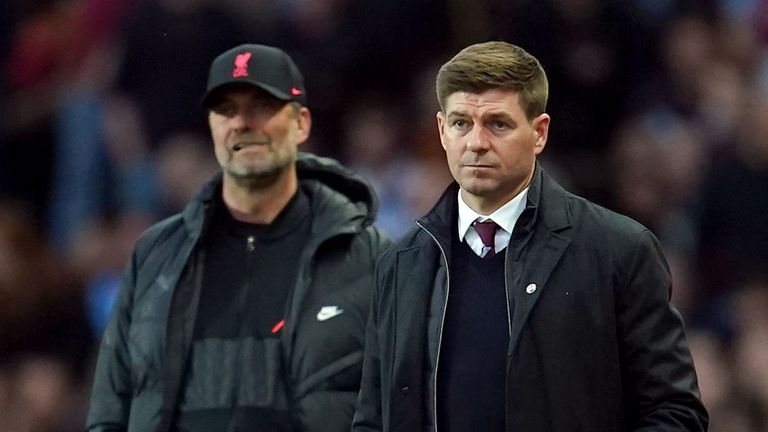 "You have to admire a team that wins games continuously and I admire them. They have an outstanding team and outstanding manager but I would like to have seen them in 20 years time when I hang my boots up, rather than now!"

Liverpool came from 14 points behind City to close the gap to just one going into Sunday's final round of fixtures, but the England international believes the Reds can be proud of their season no matter how this weekend's finale goes.

"Going back to January, we were miles back and fought back into an amazing position," Alexander-Arnold says. "To fight in every competition, it's one of the best team performances in Premier League history.

"We've taken every trophy to the last game. That's all you can ask for, it will be a special achievement on Sunday. It's an amazing team and an amazing set of lads and we are proud of our achievements."

How Liverpool can win the title on Sunday?

Manchester City (90 points) have already won three Premier League titles on the final day of the season - in 2012, 2014 and 2019 - and they could do so again this Sunday. Pep Guardiola's men lead Liverpool by a solitary point.

An unlikely play-off for the Premier League title is still possible, in the event of both Man City and Liverpool finishing on the same number of points, goal difference, goals scored and goals conceded - with their head-to-head record already level.

For that play-off to happen, Manchester City would need to lose 6-0 at home to Villa, with Liverpool and Wolves drawing 5-5 at Anfield.