Kate Greville told a jury at Manchester Crown Court on Wednesday that when Ryan Giggs told her to do something, she would do it.; Warning: This article contains descriptions of a distressing nature 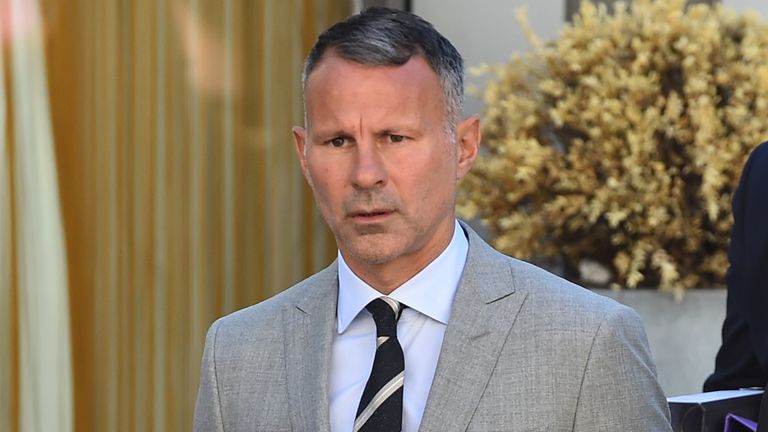 Sky Sports Senior reporter Geraint Hughes provides an update from day three of the Ryan Giggs trial where his ex-girlfriend Kate Greville told the court she 'felt like a slave' during their relationship. Ryan Giggs denies all charges

​​​​​The ex-girlfriend of former Manchester United footballer Ryan Giggs has told a court she became "a slave to his every need and every demand".

Kate Greville told a jury at Manchester Crown Court on Wednesday that when Giggs told her to do something, she would do it.

The PR executive told Chris Daw QC, defending, during cross-examination: "He made me feel like I had to do what he said, otherwise there were consequences."

Giggs, 48, denies using controlling and coercive behaviour against Ms Greville, 36, between August 2017 and November 2020, assaulting her, causing actual bodily harm, and the common assault of her younger sister, Emma.

The court heard that Ms Greville gave a statement the day before the start of the trial in which she said she had felt like "a slave" to the defendant.

She said: "That is what it felt like. When Ryan said do something, I would do it."

Ms Greville agreed that she has made a number of witness statements to police following the alleged assault in November 2020, including two in the last week.

Mr Daw asked: "In the course of those statements, did you tell the police the whole truth?"

Mr Daw said: "Have you ever told any lies to the police about anything?"

The barrister went on: "Have you ever told lies to anyone else - your family and friends - in relation to this case?"

Mr Daw said: "It's your position, is it not, that in effect he almost manipulated you into entering a relationship in the first place - a degree of mind games?"

Ms Greville said: "I was in a vulnerable position and he played on it."

Mr Daw said: "This was not just two consenting adults, both equally married at the time, who embarked on an affair?"

The witness replied: "There was a degree of imbalance on my side because of the situation I was in with my ex-husband."

She told the court that Giggs' alleged controlling behaviour also affected her friendships and "he isolated me from certain people".

She added he also "interfered with my ability to interact with my family".

Ms Greville told the court that violence by Giggs was "not regular" and he would use aggression more as a form of control.

Mr Daw asked: "Do you say he undermined your confidence, your self-esteem and was disparaging to you generally in those ways?"

She said: "Yes, on the whole he was, but on the other side it was like two extremes. Other times he would give me confidence.

"He was not constantly awful, not constantly horrible. It was hot and cold. Two different people. The result of his behaviour ... undermined my self-confidence."

In May 2019 Ms Greville messaged Giggs, saying: "I love everything you do for me."

The ex-footballer replied: "For example?"

Ms Greville posted: "When you pick me up. All the support. The convos. Everything."

Mr Daw asked her: "Was that the truth?"

She told the court: "We were in a really good place at that point. We had just got back together."

Ms Greville said she is "really into psychology" and during the relationship she Googled what was happening in her relationship.

"The thing that came up was not coercion, there was narcissistic personality disorder," she told the court. "And what I was experiencing was very similar to that."

She told the court her relationship with Giggs started in 2013 when she was in a "controlling marriage" and noticed the football star was interested in her.

But she said she was vulnerable and he used "techniques" to lure her in.

She told the jury: "There was things about him that definitely were luring me into a relationship."

Mr Daw said: "The truth is it's a complete fiction Ryan was using psychological techniques on your vulnerabilities. It's just rubbish."

Ms Greville replied: "Absolutely not. I felt like he was using techniques. I was vulnerable, that's a fact. I was in a controlling relationship. That's a fact."

She said it "felt like escapism" when Giggs showed her attention when she was very low, adding: "When someone looks like your knight in shining armour - 'oh my God, this man was going to be my soul mate' - that takes over."

Mr Daw asked: "Does Ryan's public profile or wealth have anything to do with your interest in him?"

She replied: "It was not the money side that was attractive. If anything, that he was a footballer, it put me off."

Mr Daw asked the witness whether she was "planning on seeking a large sum of compensation when this is over?"

She said the pair first had sex in December 2014 while on a work event at a hotel in London and she left her husband the following February.

On Tuesday, Ms Greville told a jury that Giggs grabbed her by the shoulders and headbutted her in November 2020 after she earlier confronted him about his serial cheating.

She said in the lead-up to the alleged assault, she had learned he had had "full-on relationships" with eight women while they were together.

The discovery of messages "going back years" on the former Wales international's iPad prompted her to decide to leave him, she said.