The former English football captain was seen by Sky News wearing a dark flat cap, suit and tie as he waited to pay his respects. 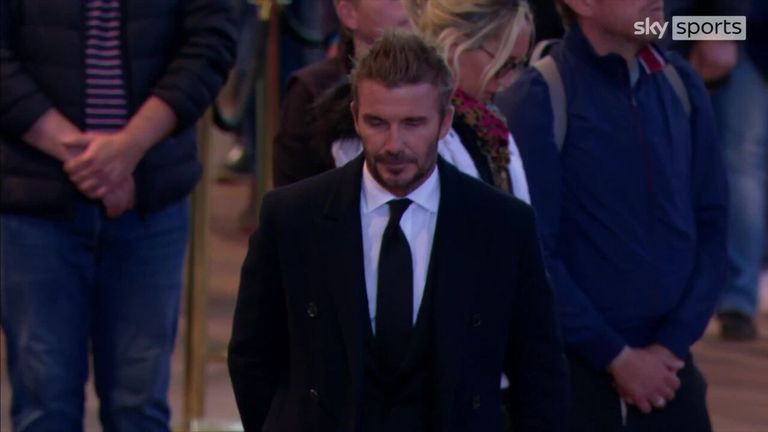 David Beckham has joined thousands of people queueing to see the Queen lying in state.

Sky News spoke to Beckham just after 2pm on Friday; 12 hours after he joined the queue.

He told Sky News he was there to celebrate Britain's "special" Queen.

The former England football captain was seen wearing a dark flat cap, suit and tie as he waited to pay his respects.

He told reporters: "This day was always going to be a difficult day.

"Our thoughts are with the family, it's very special to hear all of the stories from people here.

"The most special moment for me was to receive my OBE. I took my grandparents with me who were huge royalists.

"I was so lucky that I was able to have a few moments like that in my life to be around Her Majesty.

Chris Jones, and a group of four friends, spotted the 47-year-old in the queue once they had made it into Victoria Gardens, when they noticed he was six rows ahead.

Mr Jones, 50, travelled from Gloucester this morning and had been queuing for around 10 hours when he made it to the final straight.

Beckham reportedly took a few selfies with fans, temporarily causing the queue to grind to a halt.

Mr Jones told Sky News: "We wondered what the interest was at first.

"This just shows the power of all people wanting to pay their respects to the Queen."

Watch live stream of the Queen lying in state

Twitter user Jules Birkby, who uses the username @NowThenSunshine, said Beckham was "just a few lines behind us in the snake".

They tweeted: "The Queue is now full of people trying to photograph David Beckham and forgetting to actually move onwards.

"It's madness! I feel a bit sorry for him, but he's taking it very well.

"It's made me almost forget that we've been in The Queue almost TWELVE HOURS though."

Last week Beckham said the outpouring of grief around the world following the monarch's death demonstrated "how much she inspired us with her leadership".

"I'm truly saddened by the death of Her Majesty, The Queen. What an outpouring of love and respect we saw for the Platinum Jubilee for her life of service," he wrote on Instagram.

"How devastated we all feel today shows what she has meant to people in this country and around the world. How much she inspired us with her leadership.

"How she comforted us when times were tough. Until her last days she served her country with dignity and grace.

"This year she would have known how loved she was. My thoughts and prayers are with our Royal Family."