Cometh the hour, cometh the man.

Lionel Messi had endured a deeply frustrating evening against Mexico at the Lusail Stadium, his struggles mirroring those of the Argentina team as a whole, but his sensational opening goal was a reminder that he can still change a game in an instant.

Messi had floated on the periphery of a poor-quality encounter for the preceding hour, a wayward free kick early in the second half his only attempt on goal. But when his opportunity finally came, in a pocket of space just outside the box, he seized it.

The goal, guided into the bottom corner, was his 93rd for his country and his eighth at the World Cup, putting him level with Diego Maradona. It may prove to be one of his most significant too. Argentina had been awful until that moment but their belief gradually returned after it and when the second goal came it was no surprise to see Messi involved, the 35-year-old feeding Enzo Fernandez, whose stunning finish made the game safe.

Argentina's work is not done. A difficult final group game against Poland awaits. They will need to show considerable improvement on this performance if they are to navigate it successfully and plot a route into the latter stages of the tournament.

But in Messi, they know they have a trump card, a player who, even at 35, is still capable of elevating them when they need it most. With the Saudi Arabia debacle now behind them, and with Messi chasing his World Cup destiny, Argentina can dream again.
Nick Wright

The tournament of Mbappe?

Kylian Mbappe. The best player on the planet? It's hard to argue against it, although Erling Haaland may have something to say about that. Best player at the tournament, then. That's a safe bet.

If you look around at the other world's elite contingent, no one has flown out of the blocks. Lionel Messi, despite his moment of brilliance, and Cristiano Ronaldo look shadows of former glories. Neymar bubbled on the brink of the game with Serbia but now is out injured for the next week or so whilw Harry Kane, yes I'm putting him in this bracket, is fluffing chances and needs a lie down.

Meanwhile, Mbappe has been sharp out of the gates, stealing a march on his rivals. Two games, three goals and his team are already safely in the last 16 with a game to spare - that's how you do it.

Already a World Cup winner, there does not seem to be much pressure on Mbappe. He's playing that way anyway. Perhaps that's just him. He is fit. He is firing. He is going to take some stopping.
Lewis Jones 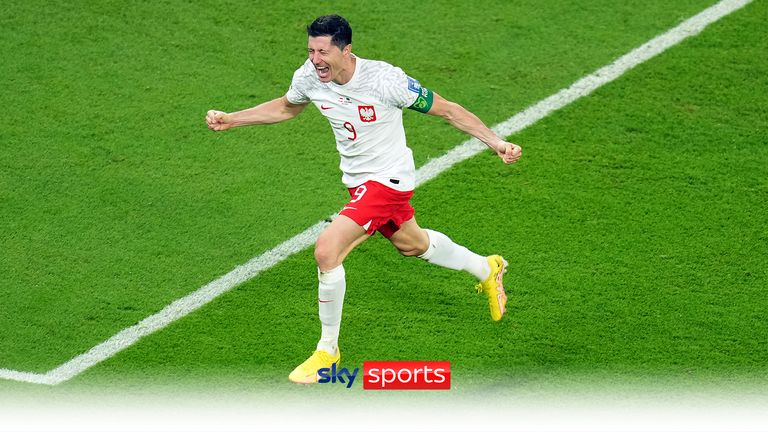 Robert Lewandowski's emotional celebration said it all. His first World Cup goal had been a long time coming, having failed to score in his previous four games in the tournament.

At one point, the 34-year-old looked cursed to never score at the World Cup after his penalty miss in the goalless draw against Mexico was followed by him hitting the post early in the second half against Saudi Arabia.

But Poland's all-time leading scorer did manage to find the net against the Green Falcons late on to end his World Cup duck and fulfil a childhood dream with the 77th goal for his country.

"I think the older I get the more emotional I get, and I'm aware when it comes to World Cups it might be my last one actually," he said.

"After I scored, everything that I had inside - the dreams and also the importance of the goal, and how I scored - all those dreams from childhood were fulfilled and came true."

Having also superbly assisted Piotr Zielinski's opener, Lewandowski became the first Polish player to score and assist in a World Cup match since Janusz Kupcewicz in 1982 against France.

Poland now face a pivotal final group match against Argentina that will determine whether they reach the last 16 for the first time since 1986 - and they will be relying upon some more magic and inspiration from their captain to get them through.

Argentina will certainly now fear facing the Barcelona striker who, with a huge weight off of his shoulders, will be full of confidence as he looks to create more emotional scenes on Wednesday night.
Declan Olley