Wales' World Cup qualifying campaign started in defeat as Belgium came from a goal down to seal a 3-1 victory in Leuven.

In their first meeting with Belgium since beating them 3-1 in the quarter-finals of Euro 2016, Wales took an early lead as Harry Wilson, who was played in by Gareth Bale, finished a slick move (10).

However, Belgium roared back as goals from Kevin De Bruyne (22) and Thorgan Hazard (28) turned the game on its head and sent Roberto Martinez's side in at half-time with the lead.

Romelu Lukaku ensured victory for the hosts in the second half, converting from the spot (73) after Chris Mepham brought down Dries Mertens, as Wales suffered their first competitive defeat in 12 matches.

Victory sees Belgium, who record a 13th straight competitive win at home, into second in Group E behind Czech Republic, who face Wales at the Cardiff City Stadium as their World Cup qualifying campaign continues next Tuesday, live on Sky Sports (kick-off 7.45pm).

However, it didn't knock Wales off their stride as they were ahead three minutes later following a scintillating team move. Some slick one-touch passing opened up the Belgium defence and Bale released Wilson, who finished superbly, sweeping the ball past Thibaut Courtois for his fifth international goal.

Wilson's opener finished off a sequence of 17 passes for Wales - he has now scored in consecutive appearances for his country for the first time, while Bale, who provided the assist for Wilson's goal, has now assisted in each of his last three games for Wales.

The goal stunned Belgium into life, and they should have equalised when Lukaku skied over De Bruyne's brilliant cross from right over the Welsh crossbar.

However, they did not have to wait much longer for an equaliser, and it was that man De Bruyne, who was allowed room to shoot from 25 yards. The Manchester City midfielder produced a powerful strike, beating Danny Ward and picking out the bottom corner via the inside of the post.

Belgium continued to put Wales under pressure, and it told as they took the lead six minutes later. De Bruyne released Thomas Meunier, who crossed from the right and Hazard took full advantage of Connor Roberts' unfortunate slip to head the hosts in front.

There was more intent about the visitors after the interval as Bale almost tricked his way through a packed home defence before the Wales captain's audacious overhead kick fell wide.

Daniel James was also off-target twice as Belgium sat back with almost half an eye on Saturday's trip to the Czech Republic.

But the result was put beyond doubt as Lukaku's spot-kick left Wales playing catch-up in World Cup qualification.

"It wasn't bad from Wales. As I said before the game, the most important thing is to get some momentum. It was the most difficult game of the campaign to start with.

"This was a tough game for the boys. There were some good parts in it but maybe they were a little bit naïve at times, which you are going to get. We don't have a lot of caps within the group but they are doing well.

"We started well with an unbelievable goal, but two bits of quality saw Belgium come back.

"There are positives for Wales to take, but they will be disappointed they haven't got something out of the game.

"It was a tough ask but defeat now puts a lot of emphasis on the Czech Republic game. You want to stay unbeaten at home for as long as possible in the campaign, if not the whole way through.

"So, that game kind of turns into a must-win early on because you want to gain that momentum as early as possible."

Belgium manager Roberto Martinez: "The game became even harder in the moment that we conceded the first goal.

"Wales adapted to the game better than us and we had two choices. To accept it and let the game go away from you, or show personality and bravery - and that's what the team did."

Wales caretaker boss Rob Page: "We got off to a terrific start. We knew going into the game they'd have large parts of possession, but we scored a wonderful goal against the top team in the world.

"We are disappointed to concede the goals in the manner which we did. I've said to the lads that if you give top teams like that half a chance you are going to get punished, and we absolutely did.

"We made a couple of changes at half time in terms of how we approached the game and our outside centre-backs pressing higher to help our midfielders out a little bit and I thought it worked at the start of the second half. There were large parts of the second half where we played extremely well, but then the third goal again kills that momentum and we struggled again after that.

"For me, in the second half, there were a tremendous number of positives and I am really pleased with parts of it.

"We need to get the players back home now and then prepare. It will be a recovery day on Thursday, and we'll assess all of the players before picking a team to face Mexico on Saturday. But we've got one eye on the Czech Republic on Tuesday, which is going to be a big game for us. We've seen their results tonight; we are not surprised by that because we know they are capable of scoring goals. They are a robust team with fantastic quality.

"We respect that and we are preparing now, it's already started in the changing room with the lads. We'll look forward to Saturday's game first but with one eye on the Czech Republic on Tuesday."

What the players said… 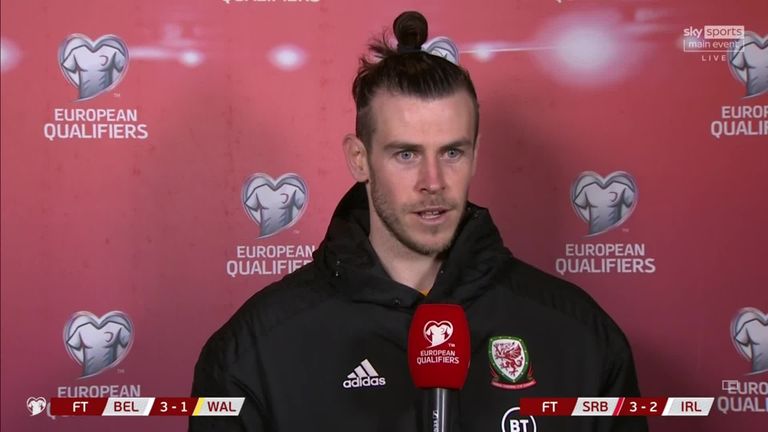 Gareth Bale reflects on Wales' 3-1 defeat to Belgium, saying that the side can't be too disheartened with the loss. Bale also dismissed any injury worries after the winger was substituted during the match.

Wales captain Gareth Bale to Sky Sports: "It was great to get an early goal, it was going well, but a few sloppy mistakes let them back in. We knew they are a great team and obviously when you make mistakes you get punished.

"In the second half we were in the game for large parts... obviously we are disappointed to lose, but we knew it would be hard coming here and have to take the positives out of the game and take them into the next game.

"We knew at half-time the next goal would be crucial, if they got it, it makes it very difficult. We showed good spirit, but it wasn't meant to be, so we take the positives out of the game.

"We can't use the pitch as an excuse, it was the same for both teams. We were playing the number one team in the world, so we can't be too down on ourselves."

Wales defender Connor Roberts said: "It is definitely disappointing, in the second half we had patches where we were on top, we had chances to get crosses in, we didn't create a whole lot but we looked more than good enough to create. First-half mistakes let the team down and it's hard to come back from that against a team like Belgium.

"Tonight, was a brilliant move from front to back and a good finish from Harry. Unfortunately, we couldn't hold on. It was a good goal and a positive to look back on."

De Bruyne became the first player to score a competitive away goal against Wales since Juraj Kucka for Slovakia in October 2019 in a Euro 2020 qualifier, ending their run of 418 minutes without conceding on the road in competitive fixtures.

The Man City star has been directly involved in 14 goals across his last eight appearances for Belgium (5 goals, 9 assists), scoring in back-to-back matches for his country for the first time since May 2016 (a run of four).