Willian joined Arsenal from Chelsea as a free agent last summer; the 32-year-old is contracted at the Emirates until the summer of 2023, but is reportedly considering his options after scoring just one goal in 37 appearances for the north London club

Former Chelsea forward Willian is understood to be keen on a return to Stamford Bridge.

Last summer Chelsea worked hard to extend the 32-year old's contract, but were unwilling to offer him a three-year deal, leading to his move to north London as a free agent.

However, after less than a year at the Emirates and with just one goal in 37 appearances, Willian is understood to be keen to consider his options.

A number of clubs in Europe, as well as David Beckham's MLS side Inter Miami, are working hard to sign the Brazilian, but Sky Sports News has learnt that a return to Stamford Bridge would be his number one choice.

Willian is contracted at Arsenal until the summer of 2023, but Sky Sports News' Dharmesh Sheth reported this week that he would likely be allowed to leave early as Arsenal look to free up funds for their transfer targets. 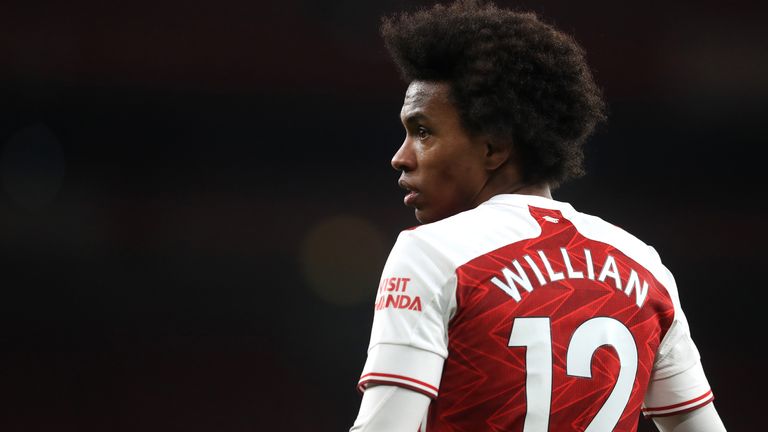 Sky Sports News reporter Sheth writes: "This promises to be another busy summer for Arsenal.

"We shouldn't expect big-money arrivals due to the financial hit the club took during the pandemic - as well as another season out of the Champions League.

"David Luiz will leave when his contract expires next month. There are also question marks on whether striker Eddie Nketiah will stay.

"Nketiah's contract is up in the summer of 2022 - as is Alexandre Lacazette's. As yet, there has been no news of talks over a new deal for either player.

"Willian is another player who may be allowed to leave, despite having two years remaining on his deal.

"As it stands, on-loan players Martin Odegaard and Dani Ceballos will return to Real Madrid. Arsenal are thought to be keen on signing Odegaard on a permanent transfer - though they could be priced out of a deal. 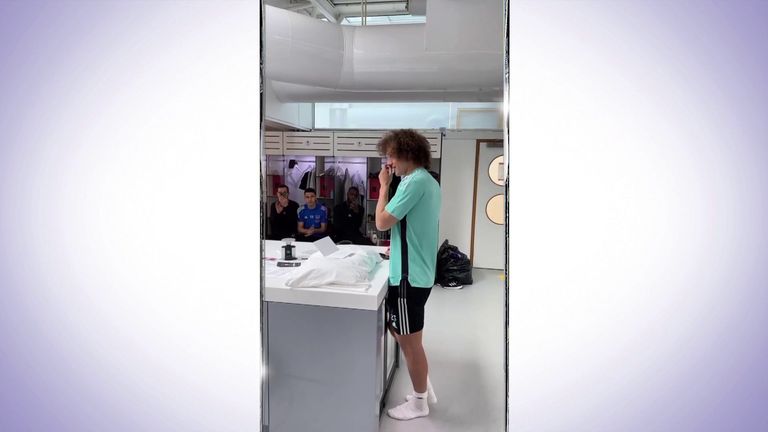 David Luiz gives an emotional farewell speech to his Arsenal team-mates ahead of his departure from the club at the end of the season (Pictures: Arsenal FC).

"Defender William Saliba is expected to return from his loan spell at Nice and fight for a first-team place.

"Matteo Guendouzi has been on loan at Hertha Berlin and Lucas Torreira has been at Atletico Madrid. Both are expected to be available.

"This will give Arsenal the opportunity to enter the market - an attacking midfielder has been an area they have wanted to strengthen. Expect that to be a priority IF they are unable to do a deal for Odegaard.

"There could be some incoming movement in the full-back areas - and perhaps up front too. Youngster Folarin Balogun recently signed a new contract - but if Lacazette leaves, Mikel Arteta may look to increase the competition for captain Pierre-Emerick Aubameyang."

Arteta has made no secret of the need for an overhaul and he is optimistic the club's Kroenke owners will back him in the transfer market.

"The squad needs changing," he said earlier this month. "There were already a lot of changes in December, something that has not been done in years, but it tells us where we were. Things are going to have to change and the owners are going to back it up."

Arteta has also been at pains to point out that Arsenal's decline set in long before his appointment as manager. In a separate media appearance, he said: "We have not been competing with the top clubs in this country for five years.

"It is not as if this process started six months ago - it started five years ago and you can see this trend. This year is not year one.

"I think a project has its phases and I am telling you we are in a much better position today to be where we want to be very soon - if we do what we have to do.

"But we have to be ruthless. There is no time to waste and there is a lot to do."