Diego Maradona died at the age of 60 on Wednesday; Argentinian spent seven years at Napoli winning their only two Serie A titles in 1987 and 1990; Napoli president Aurelio de Laurentiis says stadium could be renamed San Paolo-Diego Armando Maradona

Napoli will rename their San Paolo home stadium in memory of Diego Maradona after the club legend died aged 60.

Maradona, regarded as one of the greatest footballers of all time, forged a strong bond with the Italian club and its supporters during his seven-year spell between 1984 and 1991.

The forward, who led Argentina to World Cup glory in 1986, joined Napoli from Barcelona and won their only two Serie A titles - in 1987 and 1990 - along with the Coppa Italia and UEFA Cup.

"I've been in talks with local authorities for the past 17 years, I have always asked to buy the stadium and rename it 'Diego Armando Maradona'," De Laurentiis told Sky in Italy. "If then, for tradition, we will need to call it both 'San Paolo' and 'Maradona' so be it.

"It won't change much, but it's only right that Maradona has this recognition. Even if we were to build a whole new stadium, I would name it like that."

"I believe it is right to name the San Paolo after you, so we can keep you with us as a witness of the excellent path this team has taken," De Laurentiis reiterated in an emotional letter addressed to the late club icon.

"Your years here remain indelible in the memories of the people of Naples - symbolic of a coveted redemption and yearned-for resurrection."

De Magistris supported the proposal that the city's stadium be renamed for Maradona, who scored 81 goals in 188 appearances for the club.

"Within 10 to 15 days, in a very short time frame, we will close the formal practice," De Magistris said on Thursday. "We will rename this stadium that is part of our life and our history to the greatest player of all time.

"It's a process but it will be a quick process, because when there is such a strong desire there's nothing that will hold us back. We're hoping to make it coincide with the resumption of games with fans."

Fans gathered outside the stadium, which was lit in memory of Maradona's time at the club, in the southern Italian city on Wednesday evening and throughout Thursday.

Ahead of Napoli's Europa League home fixture against Rijeka on Thursday night, a message has been shared among Neapolitans to organise a fitting send-off to the city's most-loved player of all time.

"Before the game, we will put lights and candles by the window for D10S, and at 9pm, after the minute's silence, we will start the biggest applause ever in the city's history," it said. 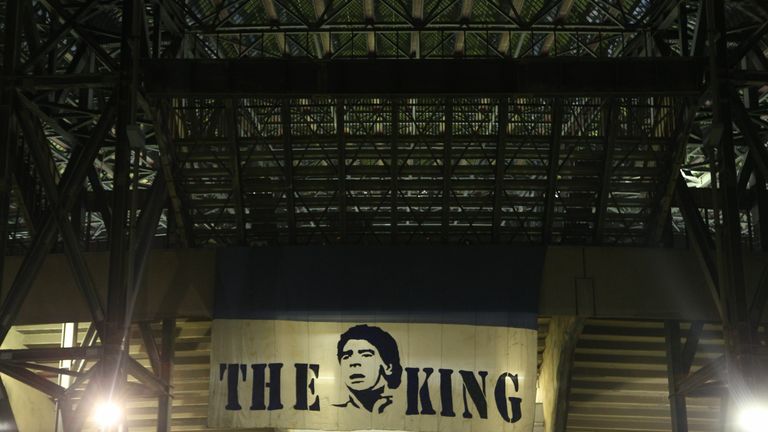 "We will shout Diego's name to let the world know that we will never forget him, and that Diego is our most-loved son and brother."

Tributes have poured in from the world of football and beyond, with three days of national mourning under way in Argentina.

Heartbroken fans laid bouquets of flowers near Maradona's former club, Boca Juniors. Others gathered in the San Andres neighbourhood where he lived and in La Plata, where he had lately been technical director for Gimnasia y Esgrima.

A minute's silence took place before Wednesday's Champions League matches and the same will happen before all other European fixtures this week, including Napoli's Europa League home match with Rijeka.

Pele paid tribute to his fellow all-time great Maradona, saying: "One day, I hope we can play football together in the sky".

Argentina's all-time top goalscorer Lionel Messi wrote on Instagram: "A very sad day for all Argentines and football. He leaves us but does not leave, because Diego is eternal. I take all the good moments lived with him and send condolences to all his family and friends. RIP."

Cristiano Ronaldo tweeted in Portuguese alongside a picture of him and Maradona: "Today I say goodbye to a friend and the world says goodbye to an eternal genius." 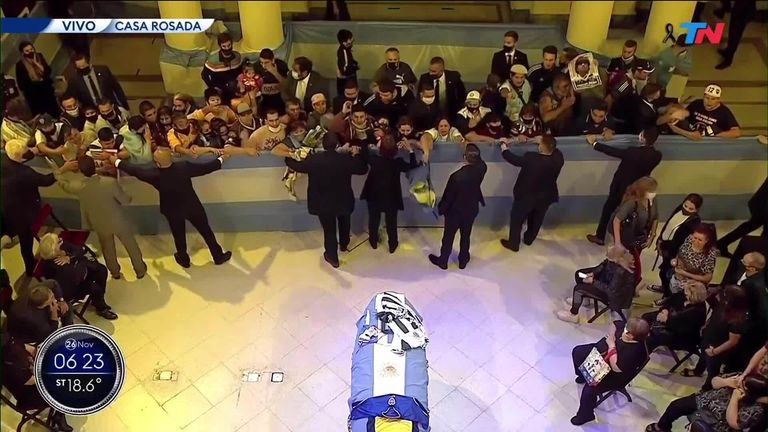 First fans gather at the Casa Rosada to pay their respects to Diego Maradona, who lays there.

Gary Lineker, who was in the England side beaten by Maradona's Argentina in the 1986 World Cup quarter-final, led the tributes on Twitter, writing: "By some distance the best player of my generation and arguably the greatest of all time.

"After a blessed but troubled life, hopefully he'll finally find some comfort in the hands of God. #RipDiego."

Manchester United and England forward Marcus Rashford also posted a message on Twitter, while Jamie Carragher wrote: "I'll never forget watching Diego Maradona as an 8 yr old at the World Cup in Mexico. Never seen anything like it on that stage since. Sad news."

"One of the best ever. An unparalleled magician. He leaves too soon, but leaves a legacy without limits and a void that will never be filled. Rest in peace, ace. You will never be forgotten."

Diego Maradona's time at Napoli is the stuff of legend but Asif Kapadia's documentary got to the heart of the tale.

From his days at Boca Juniors, to Napoli and various World Cups, relive some amazing imagery from a quite extraordinary career.