Louis van Gaal's preference for working with young and malleable talent is well documented, but finding the right player at Manchester United has not been so straightforward. Prior to Saturday, the only other academy graduate to start a Premier League game this season had been Adnan Januzaj - and he was promptly packed off on loan to Borussia Dortmund within the fortnight.

As a result, United's proud record of a youth-team player being included in the match-day squad in every game since 1937 looked to be at risk. Indeed, it was only the presence on the bench of unused substitutes Paddy McNair and Sam Johnstone that kept the sequence going earlier this season. But Jesse Lingard's impact this past week has changed the mood at Old Trafford in more ways than one.

After a lively performance in the midweek victory over CSKA Moscow, Lingard produced the key moment of quality in the weekend win over West Brom. Trapping the ball with his studs, he proceeded to deliver a measured finish that guided the ball into the bottom corner of Boaz Myhill's net and end United's 260-minute wait for a Premier League goal.

It was amusing that Van Gaal took some of the credit himself - it was a training tip for him to take that touch, apparently - but it was also indicative of the fact that Lingard is a listener and that's what the coach likes in a player. "I am very happy for him," said Van Gaal. "He played very well and deserves it." 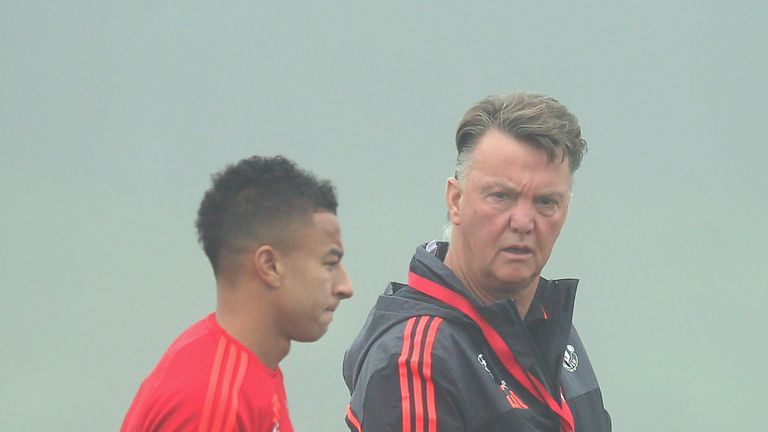 I am very happy for him. He played very well and deserves it.

"Already last year I had put him in the line-up for the first game against Swansea because he had impressed me. He got a very heavy injury in that game and had to recover, which takes a long time." That Swansea game was in August 2014 - a truncated debut in which he was substituted midway through the first half - and a reminder that the 22-year-old's fledgling success has taken time.

That's ironic given the impact that Lingard made in his first ever professional start. On loan at Birmingham, he scored all four goals in their 4-1 win over Sheffield Wednesday in September 2013. The first three goals came in a 13-minute blitz. And yet, intriguingly, Birmingham's then assistant manager Terry McDermott was impressed by Lingard's attitude as much as his quality.

Juan Mata believes the team are well placed to mount a challenge for the title.

"He had only trained with us on two occasions," said McDermott. "What I like about him is that he is laid-back, nothing fazes him. Before the game he just sat there for an hour hardly speaking. He went on to the pitch as if he was just playing another game with his mates at school. It wasn't as if he was playing in the Conference."

Sunday Supplement panel argue that Manchester United criticism is wide of the mark.

Birmingham's manager Lee Clark claimed that "the work ethic on top of the ability is ridiculous" and, later that season, Brighton boss Oscar Garcia called Lingard "one of the most exciting young English strikers" upon his decision to switch to the south-coast club as they chased promotion. So perhaps it should not come as a surprise that Lingard has started to show this ability for United.

"Other clubs wanted him on loan this season but I said I wouldn't do that," added Van Gaal. "I told him at the beginning of the season, 'I want to keep you'. He has had to wait but now he is in better shape than his companions. Now he is playing, he is playing very well." Pace is what the Dutchman demanded from his team and the youngster has brought it.

Such conspicuous energy has helped to ignite a crowd agitated by the suspicion that Van Gaal's United are too circumspect. In the win over West Brom, Lingard made 78 high-intensity runs. Not only was this 25 more than any of his team-mates on Saturday, it was nine more than any Manchester United player has produced all season. In short, he made a difference.

Jesse Lingard's 78 sprints against West Brom were the most by a Manchester United player this season.

As well as making more tackles than any of his team-mates, it's worth noting that there is a responsible element to Lingard's game too. He held his position and kept the ball well against West Brom. In fact, he currently has the best passing accuracy of any United player in the final third of the pitch. That's vital if he is to flourish in a Van Gaal team.

With Memphis Depay and Ander Herrera on the bench, the pressure is on. But Lingard's willingness should stand him in good stead to succeed where Januzaj and Memphis have struggled thus far. "He trusts the youth and we have to repay him by playing well," said Lingard of his manager recently. That's the sort of attitude of which Van Gaal approves.