In an exclusive interview with Sky Sports, the Liverpool star opens up about his career, team-mates and managers 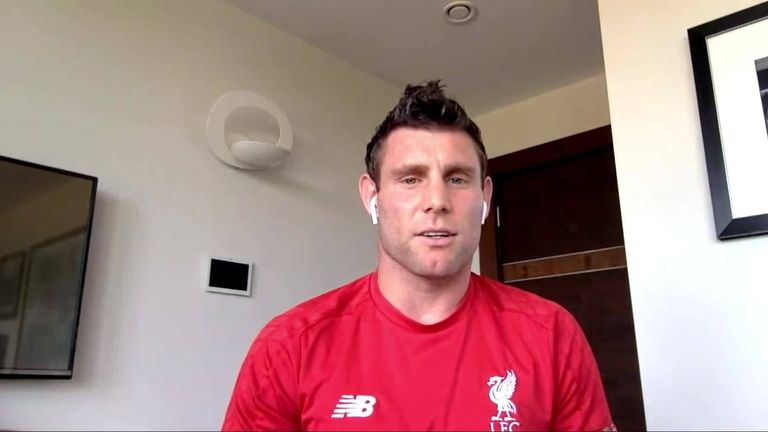 James Milner tells Sky Sports how Virgil van Dijk compares with Vincent Kompany, discusses his own versatility and lifts the lid on educating younger team-mates about the Spice Girls…

The Liverpool man spoke to Kelly Cates, Jamie Carragher and Gary Neville on The Football Show and opened up about a wide range of topics.

As well as stating his aim to add many more medals to his collection while at Anfield, Milner discussed the benefits and drawbacks of playing in a range of positions during his career, explained what kind of manager he would be, and explained how he feels about going from teen sensation to elder statesman in the dressing room.

Milner was just 16 years old when he made his first-team debut for Leeds. His late cameo against West Ham in November 2002 made him the second-youngest player in Premier League history at the time - and he grabbed the headlines on Boxing Day of that year when he became the youngest player to score in the competition in a 2-1 win over Sunderland.

Now 34 years old, and with 18 years as a pro under his belt, Milner is - by some distance - the oldest regular in the Liverpool squad. So does he feel like an elder statesman in the game?

"Not in my body. I think in terms of when you look at the dressing room and you see some of the birth dates or there's some music on in the gym and some of the lads have never heard of the people who are singing it... I think it was a few years ago when Joe Gomez hadn't heard of the Spice Girls! That shook me a bit, if I'm being honest.

"Things like that sort of give you a wake-up call but I feel good and obviously you just want to play as long as you can. It's just strange when you see your state in the team, in the squad and position changing as you remember it being one of the young guys, always going in the middle of the square first when you do rondos and things like that.

"Slowly over time things change and when things go wrong people are looking at you to try and help out whereas before you could hide a bit more. I think I've been lucky though in terms of who I've played with and the leaders who I've played under. You try to look at how they've always dealt with things and put it into your own game and try to be a positive influence in the squad."

What advice can Milner offer to young players at Liverpool?

"Throughout your career you see so many unbelievable players who haven't quite managed to get to the level that they should have done really because of various things like taking their eye off the ball, a bit of bad luck or injuries.

"There's plenty of things I've done wrong or mistakes you've made in your career, in games and in other things as well. Also, I think you just try and stop anything happening before it does in terms of players losing that focus or making mistakes that they don't need to make. 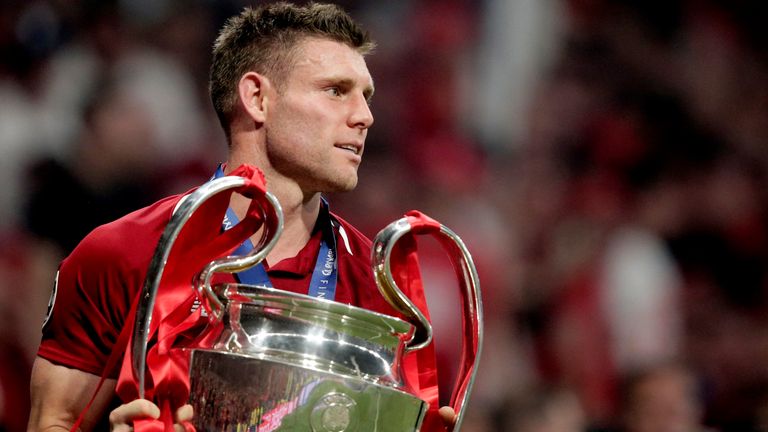 "We see lots of players burst onto the scene and then struggle a bit while they are coming to terms with it. Anything you can say or any way you can guide them to help them stay on that right track is important.

"That's the role that changes but the dressing room we have at Liverpool is very strong. The manager has always set a great team spirit, rules and a way of doing things, but also, the players marshal it as well. If everyone is in the gym before training doing their own bits and pieces, if someone's not in there they'll get ribbed and called out.

"That's a key part. It's everyone together and that's a massive plus of the squad that's been built at Liverpool. Everyone polices it together and that's not just the senior guys. Trent Alexander-Arnold is young but with the experience of the games he's played in, he's obviously a big player, but he knows he can say what he thinks as well.

"Everyone feels part of it, even the younger guys, and that's the most important thing. Everyone feels a part of the side, the squad and the club."

Rewinding the clock back to 2002 and his first goal, aged just 16 years and 356 days, what are the standout memories of that achievement?

"It seems so long ago now, and you see the size of the shirts and the pitches, how much it has changed. Obviously, it's a long time ago but you don't really think about it when you are that age. You are just looking for the next thing: get in the reserves, get in the first team, can you get a game, can you stay in the team?

"But when you look back now and think I was doing my GCSEs a few months before that and now your mates from school are there watching you, it's probably a bigger thing looking back at it now than it was back then when you were actually doing it."

Versatile - but what's his best position?

Throughout his career, Milner has been used in a variety of positions. From central midfield to out wide, from full-back to defensive and attacking midfield roles. But what was his preferred position as a young player - and what has become his best position during his time in the Premier League?

"When I came through, I was always a winger really. I played right or left wing. I played a bit in central midfield and when I was really young a bit up front, but mainly it was on the wing. I broke into the Leeds team on the wing and the first time I moved to the middle was with Aston Villa really.

"I still think [central midfield] is my best position. If you look at the seasons I've had when I've played solidly in centre midfield, the first one at Aston Villa, I got into the team of the year, got into the World Cup squad and I think I was PFA Young Player of the Year that year.

"Then the next time I had a solid season was with Liverpool and got quite a few assists over a few years in Europe and in the league.

"In terms of that output, I'd say centre midfield, but you play where you're asked to play, and different teams need different things. You must find a way to fit into certain teams and what the side needs.

"I'm never going to be the star of the team and the team be built around me so I think it's important that as a player you have to adapt into that team and what's required. Sometimes you can be more attacking and other times it's more defensive, covering for someone else. Sometimes it's give the other guy the ball and let him get on with it."

So looking back, has moving around positions been a frustration for him - or has it helped get more game time?

"It's a bit of both. There have been times where different positions help other people and then someone's come into the position you were playing before, and they might have had a few good games and you get left out then because he's had the opportunity to play well, whereas you've been doing a job for the team. Then you stay out of the team.

"Other times you might have been on the bench, but you play because there's a gap in the side that needs filling, whether it's at full-back or a different role. There have been games in my career where I've played five or six positions in one game. I think that's probably helped me become a better player and understand the game a bit more, know what's required and how I can help out my team-mates, and things like that.

"I think it's helped me improve as a player but when you know you are playing the same position with the same players around you, game in game out, you hit that rhythm and you'll show your best form.

"When you are in and out of the team or changing position, it isn't always easy. There are a lot of times if I'm on the bench or if the team is named, I've got to ask where I'm playing.

"There are challenges to it but that's what it's all about, adapting I suppose."

Milner has played for 26 managers at six different clubs. So what has he learnt from all those different coaches - and how would that affect the type of manager he might be?

"Every single manager is different and every single one has their own qualities and negative sides. It's important to be the best coach or the best player you can be. It's the same as a player, you take the best and worst bits from each manager and try to replicate the good bits and try to learn from other people's mistakes, if you like.

"It's important to try and get a mix of all the managers you've played under and take the best bits from them all. The majority of them have very good bits that you can take from and there are a couple that you won't probably touch, but other than that I've been very fortunate to play under some great managers and it'd be a hell of a manager if you could become the one that has the best bits out of all of them."

There have been brilliant team-mates too - and two of those top players are Vincent Kompany and Virgil van Dijk. So how do the talented centre-backs compare?

"They are massive players. You always look at the spine of a successful team and it starts right through the middle with the leaders at the back and how important defending is.

"Vinny - unbelievable player. How he went about his business, he struggled with injuries but the amount of injuries you saw him play through as well which nobody would have ever known, was incredible.

"He would put his head on the line. An unbelievable leader, a great captain with so many great qualities on that side, and rightly so, one of the greatest defenders to play in the Premier League.

"Virgil is probably a bit different to that. Maybe a bit more of a Rolls Royce, if you like, and he doesn't seem to make too many tackles. He gets in the right spot and moves the ball away.

"Maybe he's got a few more diagonals in his locker than Vinny had, although Vinny did have that as well. And Vinny had the greatest ball strike, I suppose, when he lashed one into the top corner! So, he could strike a ball alright as well."