"Like a human sling," said David Moyes. "The best Scud missile I have ever seen," added Sam Allardyce, a heavy hint of jealousy in his voice. For Luiz Felipe Scolari, it was more difficult to describe. "I have never seen anything like this in my life," said the newly-arrived Chelsea boss.

Scolari was not the only one left dumbfounded by Rory Delap's long throws when Stoke City shoulder-barged their way into the Premier League in 2008. Arsene Wenger, whose Arsenal side became regular victims, went as far as trying to get the rules changed. "It is a little bit of an unfair advantage," he said after a bruising 2-1 loss at the Britannia Stadium.

For a period, it seemed almost impossible to stop them.

The long throw was not a new concept. In fact, it felt like something of a throwback. But Delap, a javelin thrower in his youth, had the unique ability to combine distance and accuracy with a wickedly flat trajectory.

"If I throw the perfect ball, with the height and quality of the players in our team, I think it is undefendable," he said at the time. "It's been good for my kids, seeing my ugly mug in the papers. I'm not going to get any modelling contracts, but you've got to enjoy it."

Stoke did just that. There was little expectation that they would survive in the Premier League following their promotion that year. One bookmaker paid out on them to go straight back down after a 3-1 loss to newly-promoted rivals Bolton on the opening day. But those punters who enjoyed early returns were the lucky few. Stoke weren't going anywhere.

"People were saying our style of football wouldn't work in the Premier League and that we would get beat more often than not," Liam Lawrence, their former winger, tells Sky Sports. "But we had a close-knit group with strong-willed characters who had a never-say-die attitude, and we played to our strengths, which were set-pieces and Rory's throw-ins."

How the plan was formulated

Lawrence knew Delap well. They had played together at Sunderland and moved from the Stadium of Light to Stoke one after the other in late 2006. It was only some time after that, however, that the full extent of Delap's throwing ability became clear to Lawrence and his team-mates.

"It was strange how it came about," he says. "We were in training doing a small-sided game where the pitch had been taken in a little bit. Rory took a throw-in and it was just absolutely ridiculous. The next day, Tony Pulis had him launching balls into the box and that was it. It went from there."

Delap's arrow-like throws were a regular sight during Stoke's 2007/08 promotion-winning campaign in the Championship. But it was not until the following summer that Pulis fully weaponised them, instructing Stoke's groundstaff to narrow the Britannia Stadium pitch as much as Premier League regulations allowed.

Suddenly, Delap's throws were hurtling as far as the six-yard box.

"They were almost better than corners," says Lawrence. "They were just ridiculous. The trajectory he got on them was amazing. They were flat and straight and kept going. Even if they didn't come off one of our lads, they would come off one of theirs and end up anywhere. They caused havoc."

In the first few months of the 2008/09 season, Stoke netted from Delap's throws in games against Aston Villa, Everton, Portsmouth, Sunderland and Arsenal, with Ricardo Fuller, Mamady Sidibe and Seyi Olofinjana the scorers. By the end of the campaign, a quarter of their 38 Premier League goals had come from throw-ins, helping them to a 12th-placed finish.

"We worked on them religiously in training," says Lawrence. 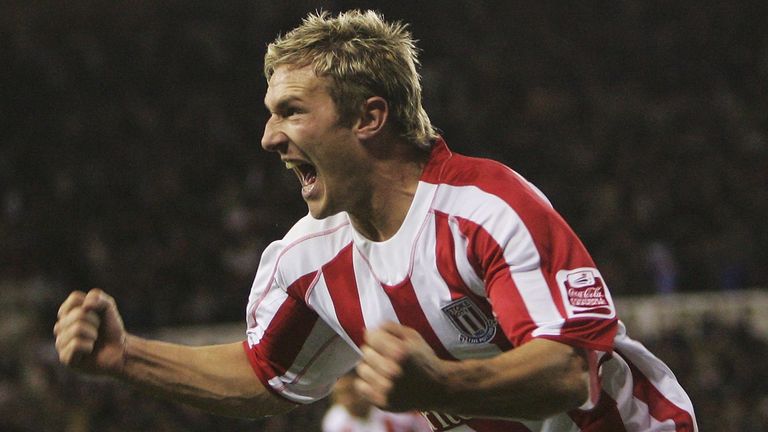 If we could cause as much as carnage as possible in the box, we knew we would always have a chance

"It was all choreographed. We had guys blocking. So, if Ryan Shawcross was getting across the near post, one of our big lads would be blocking his marker, so he would have a free run. It looked like carnage, but that was how it was meant to look. If we could cause as much as carnage as possible in the box, we knew we would always have a chance."

'A horrible side to play against'

At a time when the big four - Manchester United, Liverpool, Chelsea and Arsenal - were pulling away from the rest in the Premier League and Spain's tiki-taka was dominating the international game, Stoke became a feared opponent by doing things their own way. It was not pretty, but their reputation for physicality and aggression was one they relished.

"Our dressing room was one of a kind," says Lawrence. "We used to get a lot of criticism and we hated stuff like that. Tony would come into training or on matchdays with cuttings of newspaper articles of people slagging us off and slating us and pin them to the walls. It got everybody's backs up and made us more determined than ever to succeed."

They were helped by the Britannia Stadium's layout - its open-ended stands make it one of the windiest arenas in the country - and also its vociferous atmosphere. By the end of their first season in the Premier League, they boasted the seventh-best home record in the division.

We knew they hated our style of play and that they didn't think we were very good footballers. It just spurred us on

"The crowd at Stoke are one of the best," says Lawrence, who now covers their games for local radio. "We would pack the ground. It would be loud and noisy. Sometimes in the tunnel before games, you could look at the opposition and know that you already had them beat because they were looking across at our lads and they were all 6ft 3ins, 6ft 4ins monsters.

"That little edge made a big difference. As soon as we got a throw-in anywhere near the opposition 18-yard line, you could see the panic. Their players would be getting back in and shouting at each other to make sure they were marking correctly for what was to come."

It was not uncommon for Delap to take more throw-ins in a game than he attempted passes. As well as providing scoring opportunities, the throws became psychological weapons. Stoke used them to waste time and break up the flow of games. Their opponents would become obsessed with stopping them to the point of neglecting other areas of preparation.

Some chose to pack the six-yard box with defenders in order to maximise their chances of making a clearance. Others would leave space for the goalkeeper to try and claim it. Advertising hoardings were brought closer to the pitch to disrupt Delap's run-up. In one game against Hull, there was the bizarre sight of Boaz Myhill putting the ball out for a corner rather than a throw. Speaking on his podcast in 2018, Peter Crouch said he once saw tears in the eyes of Heurelho Gomes during a game against Tottenham.

It was Arsenal, though, who encountered the most problems. In their 2-1 loss at the Britannia in November 2008, the game which prompted Wenger to suggest rule changes, both of Stoke's goals came from Delap's throws. It was the beginning of what became a bitter rivalry between the two sides.

"Wenger tried everything," says Lawrence. "He tried to change the throw-in law. He tried to prevent Rory from having a towel to dry the ball. All sorts.

"We knew they didn't like us. They were like a five-a-side team at the time. They loved playing in little combinations. We knew they hated our style of play and that they didn't think we were very good footballers. It just spurred us on. Tony always used to tell us to be extra loud and aggressive in the tunnel before we went out against them.

"Anyway, if you look back at those first couple of seasons in the Premier League, some of the goals scored by Ricardo Fuller, myself, Matty Etherington and James Beattie were absolutely brilliant.

"It went unnoticed because of the throws, but we had good players and that includes Rory. People said he was only playing because he could throw it, but he got through a lot of work and he was a lot better than people gave him credit for."

Gradually, Stoke's Premier League rivals learned to deal with the unique threat of their throw-ins. After scoring nine Premier League goals from throws in 2008/09, the number fell to five in 2009/10 and four in 2010/11.

Delap left the club in 2013, with Stoke going on to secure three consecutive ninth-placed finishes under Mark Hughes. But an attempted shift to a more expansive style of play came at the cost of their identity. They suffered relegation from the Premier League in 2018 and have spent the last two seasons fighting for survival in the second tier.

"It's been a lot better since Michael O'Neill came in," adds Lawrence. "They look like they are slowly turning a corner. But they are still in difficult times.

"I said it years ago, but Stoke is Stoke. Everybody knows them for being hard to beat and a horrible place to go. What's happened in the last few years shows that you've got to be careful what you wish for. They wanted to be a better footballing team and people were saying, 'We need these sorts of players, we need those sorts of players.' But eventually it all started to go wrong. The identity of Stoke was lost and that was a shame."

While Stoke's struggles continue, however, the throw-in is making a comeback. Jurgen Klopp has credited specialist throw-in coach Thomas Gronnemark for a playing a part in their recent success, and services like his are in demand across Europe as clubs search for the hallowed marginal gains which can elevate them above the rest.