Raheem Sterling for Theo Walcott would be deal of century, says Paul Merson

Paul Merson thinks if Liverpool swap Raheem Sterling for Theo Walcott plus cash then it would be the best transfer of all time.

Sterling has caused controversy by turning down a recent £100,000-a-week contract offer at Anfield and has been linked with a move to Real Madrid and Manchester City.

He remains contracted to Liverpool until the summer of 2017 but Brendan Rodgers is adamant Sterling is going nowhere with both parties due to talk about the situation in the summer.

Meanwhile, Liverpool have been strongly linked with a move for out-of-favour Arsenal man Theo Walcott in the summer and Merson thinks it’s a deal that has serious potential.

Speaking ahead of Liverpool’s clash with Newcastle on Monday Night Football, Merson said: “If Theo Walcott goes to Liverpool, Raheem Sterling goes to Arsenal and Liverpool get some money, I think Liverpool have had the best deal ever.

Merson also finds it “unbelievable” that Sterling is stalling on the big-money deal on the table and uses the example of Scott Sinclair leaving Swansea for Manchester City as a direct comparison. 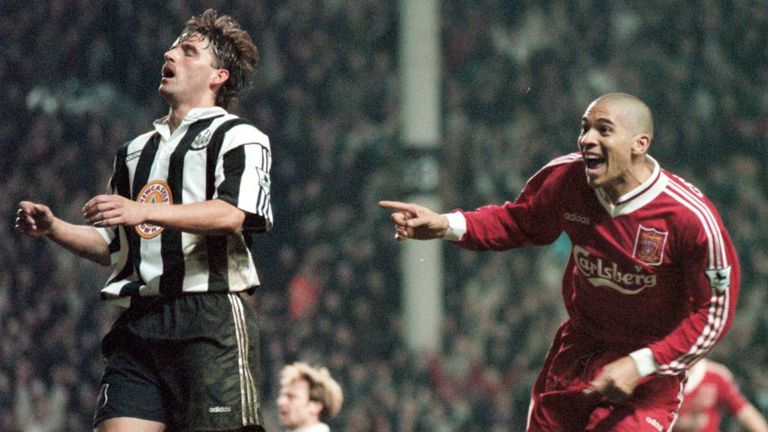 “It’s unbelievable, Liverpool, one of the biggest clubs in the world are offering him £100,000-a-week and he’s turning it down... not for me,” he said.

“I think he’s going to struggle. The fans will be on his back very quickly. He should get his head down and take the money. He’s been badly advised. Actually, badly advised isn’t even the word – it’s worse than that.

“He’s 20 years old and has been offered £100,000-a-week. He’s not looking for his last move – he’s got another two moves left yet only if he fulfils his potential.

“The problem is, these players make wrong decisions. We go ‘where are all our good young English players?’

“They don’t want to be the best they can be. Look at Scott Sinclair, he would have played 30 times for England now if he didn’t go to Manchester City – everybody knew he wasn’t going to play at City. I can see similarities between Sinclair and Sterling.”

Merson believes that despite the big gap, Liverpool have the ability to win all their games and seriously challenge City for that final Champions League spot.

“Liverpool are not out of it – they have to win all their games though,” he said. “They have the potential to win games on the trot.

“I think a lot of Manchester City players will be sitting there thinking ‘we can’t win the league and I’m not going to be here next season’ and that’s a worry. It’s a big football match for Liverpool, they need to win this and get back to winning ways. Their hopes of top-four are not over. All teams have got hard games.”