Manchester City vs Arsenal: Will Mikel Arteta's men claim a statement win at the Etihad?

Mikel Arteta takes Arsenal to Manchester City on Saturday to face his mentor Pep Guardiola - but will the Gunners pull off a statement win to underline their improvement under him?

Former City coach Arteta has come up against Guardiola and City twice already in his short managerial career, losing 3-0 at the Etihad when the Premier League restarted in June and then pulling off a shock 2-0 win in the FA Cup semi-finals en route to lifting that trophy.

Ex-Arsenal striker and current Sky Sports pundit Alan Smith has been impressed by Arteta's work at the club since he took charge last December and fully expects Arsenal to improve on their eighth-placed finish last season in the Premier League.

However, how high Arsenal will go, remains to be seen - but Smith says a win at City would be a huge step forwards for the team.

"I think Arsenal fans will be looking forward to this one," Smith told the Pitch to Post Preview podcast. "More so than a year ago when going to the places of the big boys would have filled them with a bit of dread as to whether they were going to get turned over, embarrassed even.

"But nowadays, win lose or draw, Arsenal fans are fairly confident they'll go up there prepared, organised, and they'll give City a good game. Arteta has come a long way in a short space of time. As a coach, individually, and also in charge of that Arsenal team that is pushing in the right direction.

"It's that attention to detail first of all and the demand for high standards week in, week out, and day in, day out on the training ground [which Arteta has in common with Guardiola]. That's the mark of a good coach, always pushing his team.

"It's getting those players to buy into that project. It's not so easy these days, you've got independent footballers that can go one way or the other if they don't feel the manager is the right man and they don't get a sense he's doing the right thing.

Everyone at Arsenal wants to be a part of Arteta's way forward and if they're buying into it, that's a great asset, a great strength to have.

"But everyone at Arsenal wants to be a part of Arteta's way forward and if they're buying into it, that's a great asset, a great strength to have.

"It would be a statement to go up there and get a win. Obviously they lost at Liverpool and nobody was all that surprised by that, least of all Arteta. There's still a gap there - a sizeable one.

"The early results suggest it might be a funny season without the fans, we've already seen some strange results and we might get some more. I'm not suggesting we'll get a shock with Leicester winning the title but Arsenal should improve quite significantly on that eighth-place finish last season. I don't think there's any doubt about that. 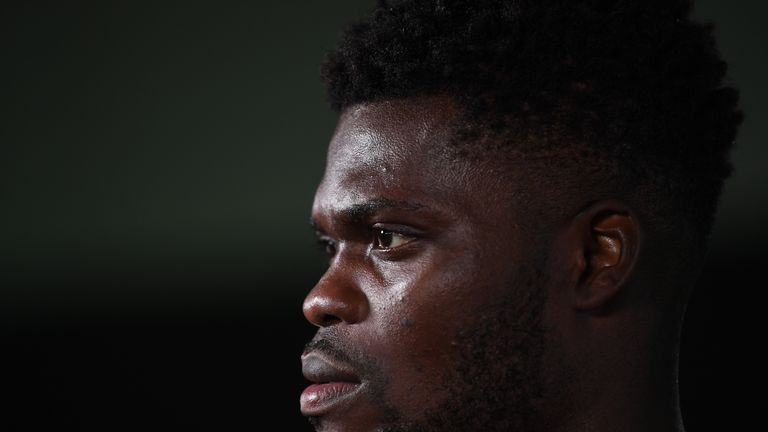 Arsenal manager Mikel Arteta says the arrival of Thomas Partey has created a buzz with fans and staff, and he admits he did have doubts about whether the signing would go through in time

"And quite rightly they're aiming for a top-four finish to get them back in the big time, back into Champions League football where they were for a couple of decades or more. That's the challenge. They've obviously won a trophy with the FA Cup last season, which was wonderful, but to get into that top four that would really make a statement in Arteta's first full season."

Why City's style could suit Arsenal

Smith believes new Arsenal signing Thomas Partey will be a real asset to Arteta this season - listen to the podcast for more analysis from Smith of what Partey brings to the club - but on the field this Saturday, he expects the absence of City's injured midfielder Kevin De Bruyne to be a key factor.

Smith also says City's preference to come forward and attack in numbers could play into Arsenal's hands, given the pace the visitors have in their ranks and also the difficulty they have shown at times in breaking down deep defences.

"It's great news for Arsenal that De Bruyne's not there, especially at a time when City are just searching for the right blend this season," said Smith.

"They've only played three league games but they had that heavy defeat to Leicester last home game then the draw at Elland Road against Leeds. So it's not been ideal for Guardiola, not ideal for any manager with these international breaks, it's stop-start and, as we know, players at different levels of fitness. But for City, he's trying to get things bedded in.

"I think Ruben Dias showed at Leeds that he should be a really good signing, slotting in next to Aymeric Laporte in the long term will bolster their defence. Midfield is always a strength of City's because they pack that midfield with so many wonderful players, so you have to try to get to grips with that area of the park.

"You always fancy Arsenal to nick a goal and against a City side which will obviously dictate the game to Arsenal, it might suit the Gunners in terms of getting a bit more room. They have struggled against those sides at home, West Ham and Sheffield United, who have sat back and left little space in behind and that lack of creativity, that I think Arteta was after, they've struggled to break those teams down.

"But against City, on the counter with the likes of Aubameyang with that pace, they might get one or two chances."

Peter Smith is joined by Sky Sports' Alan Smith on the Pitch to Post Preview podcast to look ahead to Man City v Arsenal and analyse what the Gunners can achieve this season. Plus we have the latest from Spurs, where Gareth Bale could face West Ham this Sunday, and the lowdown on Crystal Palace v Brighton and Leeds v Wolves, while Ron Walker makes his bold Pitch!