Jamie Redknapp believes Liverpool will retain their Premier League title - but he says there are two key pieces of transfer business they should do to strengthen the team.

Speaking to Sky Sports' Pitch to Post Podcast, Redknapp reckons Jurgen Klopp's side have all the ingredients to become just the second team to win back-to-back Premier League crowns since 2009.

However, the Sky Sports pundit believes Liverpool could boost their already talented squad by bringing in a new centre-back before the transfer window closes on October 5. So far, Liverpool have only recruited left-back Kostas Tsimikas for £11.75m from Olympiakos. 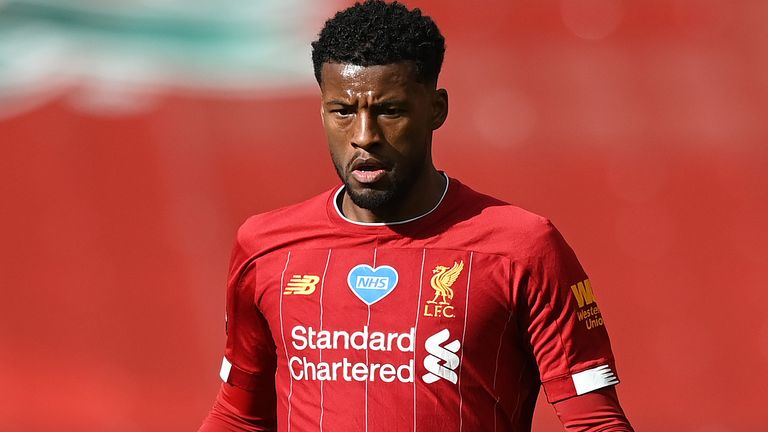 Jamie Redknapp believes Liverpool will retain their Premier League title – but, speaking on the Pitch to Post Podcast, he has picked out two pieces of transfer business they should do to strengthen the team

"I think they're in a great position to win it again," he said.

"You've lost Dejan Lovren and that leaves you quite short with only Joel Matip, Joe Gomez and Virgil Van Dijk. From their point of view, you just hope you don't get any injuries because if they were to get any injuries in that area they would be short.

"Especially when Gomez has had injuries and Matip can't always play the full season, you might think that might be an area where they could struggle."

Redknapp also believes it should be a priority for Liverpool to tie Gini Wijnaldum down to a new deal. The Dutch midfielder is out of contract next summer and has been linked with Barcelona.

"Certainly in midfield, the Wijnaldum situation is one that needs to be resolved and I think personally you want to keep him," said Redknapp.

Wijnaldum is such an important player for the team. He's very talented, incredible energy and why would you want to let him go at the moment, unless you can get someone in who's better?

"He's such an important player for the team, he's very talented, incredible energy and why would you want to let him go at the moment, unless you can get someone in who's better? And I don't see that many midfield players better in the world right now that can do what he can do."

However, regardless of Liverpool's quiet transfer window so far, Redknapp is confident they have what it takes to see off the challenge of Manchester City again this season. Although he expects Pep Guardiola's side to be stronger defensively with the addition of Bournemouth's Nathan Ake.

"I think it's between City and Liverpool, and I'll say it now, I think Liverpool will retain the title," said Redknapp. "I think they've got an incredible team there and a togetherness that is so difficult to find. And Jurgen Klopp has made that work so well.

"If you look at City, there's not that many players out there that you can sign right now. Nathan Ake looks to me a sensible signing. He's a player that can play in many positions.

"As a young man he played in the defensive midfield position, if you want some protection. Obviously Fernandinho isn't getting any younger and he's one of the best that's ever been. He can also play left-back and he can play centre-back. But they're looking for a partnership in central defence because last year they had so many different times where they'd play Nicolas Otamendi or John Stones, Aymeric Laporte or Fernandinho, they never really got it right in that area.

"But with someone like Nathan Ake - and I know City fans might go, 'well he got relegated this year' - he's a quality player. He knows the game, he's got a brilliant left foot, incredible spring considering he's not the tallest player in the world. You can see him playing in a side like City's where your job is just to defend properly, get that ball to Kevin De Bruyne as quickly as possible and then things happen from there.

Listen to Sky Sports' Pitch to Post Podcast here to hear more from Redknapp on Chelsea's transfer business and which players he thinks will star in the Premier League this season. Plus we have updates from our reporters on Everton's new-look midfield and the Newcastle takeover.