Ederson tells Sky Sports about his brilliant distribution and the evolving role of the goalkeeper as he targets a 100th clean sheet for Man City; watch Watford vs Man City live on Sky Sports Premier League from 5pm on Saturday; kick-off 5.30pm

The clock showed 22 minutes at Villa Park when Ederson claimed Ezri Konsa's looping header, carried the ball towards the edge of his box and launched a pinpoint, diagonal pass out to Raheem Sterling some 80 yards away in Aston Villa's half.

There were audible gasps inside the ground as the ball, struck with that trademark flat trajectory, landed squarely at Sterling's feet, Ederson turning defence into attack with one swing of his wand-like left foot. But in truth it is what we have come to expect from Manchester City's playmaker in goal.

The Brazilian's outrageous distribution has been lighting up the Premier League for four years now, during which time others have been rushing to catch up. Today, the evolving role of the modern goalkeeper can be seen up and down the Premier League. Ederson, though, was ahead of the curve - even if he won't say it himself.

"Nowadays, having a goalkeeper with good feet is essential in any team that likes to build up play from the back," he tells Sky Sports. 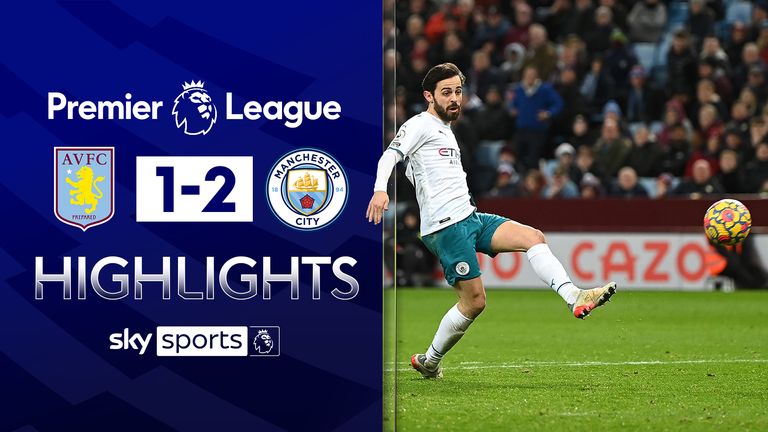 "I don't think I influenced much. In fact, I have been influenced by other goalkeepers with good feet in the past. But football evolves and players need to evolve with the game as well."

Ederson, who started out as a left-back and is known to shine in the training-ground rondos at the club's Etihad headquarters, certainly sped up Manchester City's evolution following his arrival from Benfica in 2017, his ball-playing brilliance allowing Pep Guardiola to play his way, turning City into the winning machine they are today.

"I just play naturally," he says. "It's a matter of concentration. If a goalkeeper misses a pass, there is nobody there who can help you. The goalkeeper is key in our team because we can't make any mistakes in the build-up. But my team-mates offer me a lot of options for the pass, so I'm very relaxed."

Indeed, it is not just those laser-guided long passes Ederson has in his armoury. He also excels at playing short under pressure. According to Opta, he has a success rate of 90 per cent for passes made with an opposition player within three metres of him this season.

No other Premier League goalkeeper comes close to that success rate - Tottenham's Hugo Lloris is next on 75 per cent - and Ederson also ranks top for shot and goal-ending pass sequence involvements. City have many weapons but it all starts with him.

For their opponents, it often ends with him. In addition to what he gives City with the ball at his feet, there is the small matter of what he does with his hands. The 28-year-old is an outstanding shot-stopper who produces big saves at key moments.

The latest example came in Wednesday's 2-1 win at Villa Park. Ederson had only faced one shot on target in nearly an hour of play when Carney Chukwuemeka burst through on goal in the second half but there he was, charging off his line to deny Villa an equaliser.

"The most important things for a goalkeeper are concentration and decision-making," he says. "In most of the games, we control the ball and we only concede one chance to the opposition team, so concentration is key.

"You have to be focused throughout the 90 minutes to give your best. In the last game, I was happy for my save, and to help the team in a crucial moment

"It's something that comes with my personality: calm and concentration," he adds. "I'm aware that, if I lose focus during any moment of the game, it can end up in a goal for the opponent.

"We can't be attacking all the time, so we need to know how to defend during some stages of the game too. We all know, myself and my team-mates, how important it is to be focused." 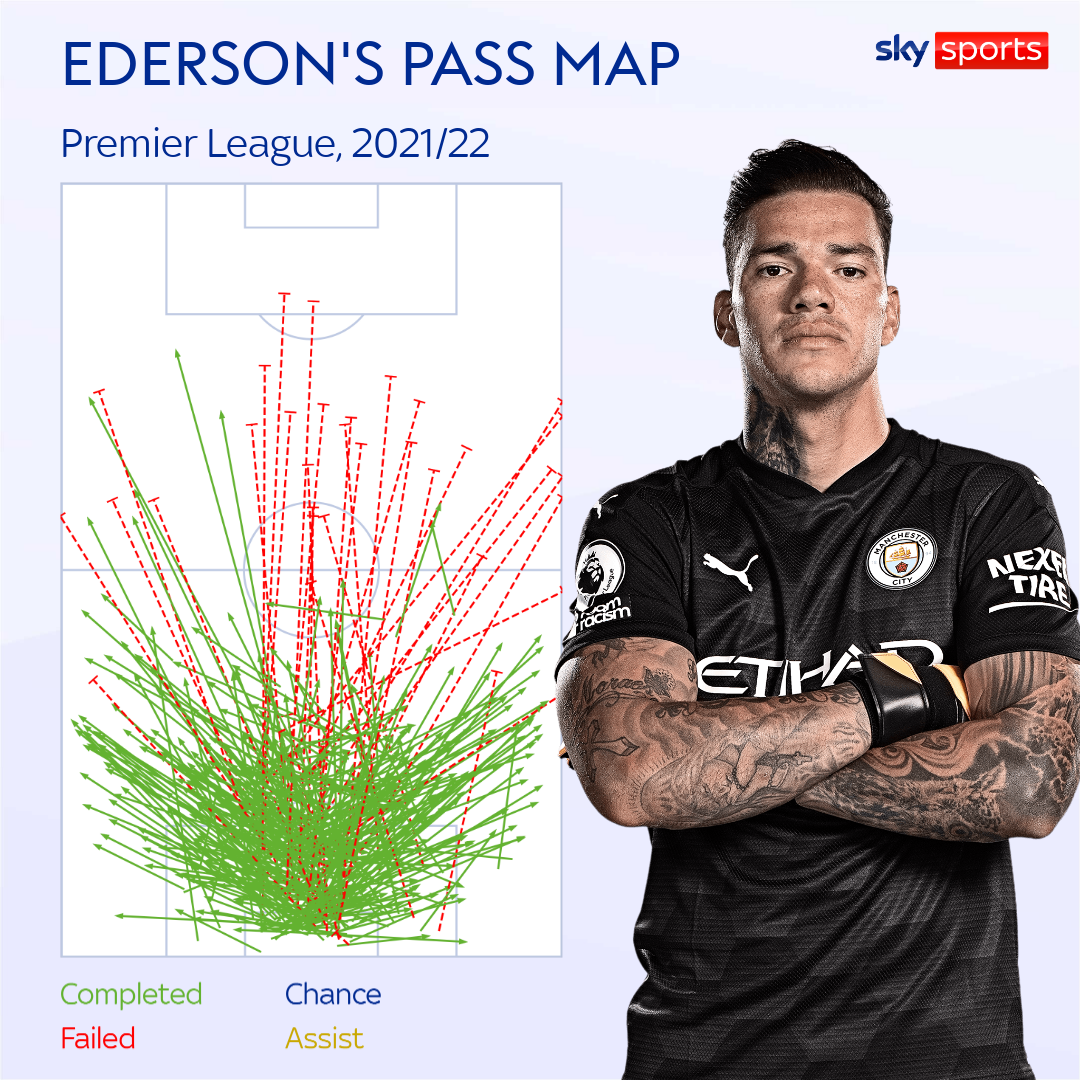 The challenge of Manchester City now is to maintain that same level of focus against Watford on Saturday and the trip to Vicarage Road carries added significance for Ederson, who is only one clean sheet away from reaching 100 for the club in all competitions.

It is some milestone. Especially after only 210 appearances.

"It's an important achievement for me, because it means I have kept a clean sheet in almost half of my games for Manchester City," says Ederson. "But all the credit should go to the whole team.

"The forwards, the midfielders, the defenders, they all do exceptional pressing and defending. The clean sheets involve the whole team, not just me."

"I already knew about his qualities and his leadership on the pitch," says Ederson. "That comes from his time in the youth teams of Benfica, so when he joined us, I knew he had everything to succeed here. He's a fantastic player, an amazing leader, and he was a great addition. I hope he can keep on giving his best for the team this season and in the future."

With the help of Dias in front of him, Ederson won two more trophies last season, his third Premier League title and his fourth League Cup taking his total to eight in four years.

City's defeat to Chelsea in the Champions League final dashed his dreams of a treble but he has since committed his future to the club for another five years, his new contract confirmed in September, and he now hopes to become a club legend - if he is not already there.

"Of course I played with players who have left recently such as Vincent Kompany, David Silva, Sergio Aguero, and others such as Fernandinho," he says. "It's a big motivation to try and match their achievements and I'm going to keep working hard so I can one day be at the same level as them.

"If you see our squad now, it's a young and very talented group. We have everything to build a beautiful history here. We need to carry on the same way as we have done and keep delivering great achievements for Manchester City."

This season's Premier League title race promises to be close and Guardiola is still pushing his players as hard as ever.

"Pep is obviously an essential factor in the success of the team for the way he implemented his style of play," adds Ederson. "When I arrived, the process had already been under way for a year and that was important because the team already knew the way he wanted to play. 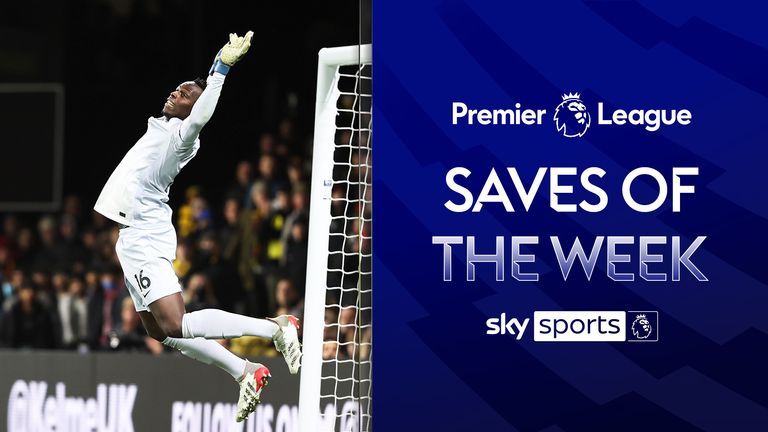 A selection of some of the best saves from Matchweek 14 in the Premier League, featuring stops from David de Gea, Lukasz Fabianski and Ederson

"Keeping the same group of players for four years has also been important because no matter who plays, our style remains the same. Everyone is talented; everyone knows what to do on the pitch. It's important to keep the backbone of the team for long-term success."

Ederson is a key component of that backbone and for all the apparent ease with which he adapted to the Premier League four years ago, he feels like a far better goalkeeper now.

"The biggest difference is my experience, because when you move to a different country and a different championship, one with a higher level, you have to work hard to reach that level.

After events at Villa Park on Wednesday, and with a 100th clean sheet in his sights on Saturday at Vicarage Road, that should be a scary prospect for Manchester City's rivals.