Casey Stoney tells My Icon: Rainbow Laces that coming out boosted her performance 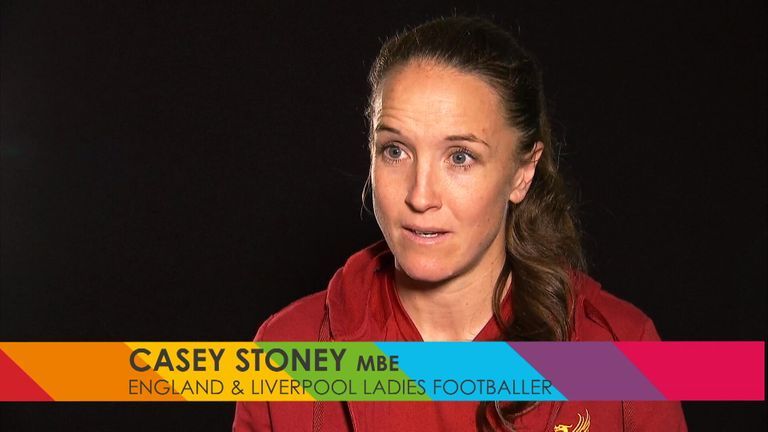 Watch a clip from episode six of My Icon: Rainbow Laces as Casey Stoney talks about being an LGBT role model in sport. See the interview in full On Demand

For any young person with sporting dreams, role models are crucial - and Casey Stoney is honoured to be held in that regard.

As one of English football's most capped internationals, Stoney has been a familiar face in the squad since making her debut as an 18-year-old back in August 2000.

Reflecting on her first experiences in football for Rainbow Laces Week, Stoney tells Sky Sports' My Icon: "There were no girls teams where I grew up in Essex. You were always told as a young girl that girls couldn't play football, shouldn't play football.

"But my mum wasn't of that belief. She would say 'if you're good enough, you can play' and she found me a team - and it was a boys team I played for."

Find out more about our special series of interviews to mark Rainbow Laces Week...

Despite domestic success at Charlton, it was not until the Women's World Cup in China in 2007 that Stoney cemented her place in the England side at left-back, and went on to win the FA's International Player of the Year Award for 2007/8.

Further club spells at Chelsea and Lincoln followed, and then in 2012 she was made England captain - an appointment she described at the time as "the biggest privilege I've ever been given".

The responsibility of the role also made her consider the prospect of being more open about her sexuality.

"When Tom Daley came out [in December 2013], there were so many positives around his story and what happened," says Stoney. "It made me go, 'oh OK. If he's had that sort of response, I think it's OK'.

"I decided to make the move because I was England captain at the time. I had a profile that I felt I could use in a really positive way.

"I think it was when I felt comfortable in my own skin. It took me almost 32 years to get there."

The only way you can change the world is if you make the difference in yourself.

Stoney went on to discuss her sexuality publicly for the first time in an interview in February 2014.

"It was spurred on by a story that I'd read about a young man who had taken his own life because of homophobic bullying," she explains.

"I couldn't believe that was still happening, and it should never happen. I don't understand how you can hate someone for just loving another human being."

Watch the promo for My Icon: Rainbow Laces. All episodes are available On Demand

She also describes what held her back from speaking openly for so many years.

"It was the fear of judgement from everybody else," adds Stoney. "As a player, as a footballer, you get judged every day. What do you look like, how do you play, how do you perform, what's your diet like - you're judged on everything.

"That was the part of my life that I was most frightened of being judged on.

"The reality was that it was the complete polar opposite of what I thought. The reaction was overwhelmingly positive."

At the end of the 2013/14 campaign, Arsenal Ladies won the FA Women's Cup and mounted a challenge for the Super League title, with Stoney a key player.

"For my career, I had two of the best seasons of my life after coming out," she says. "I was in the PFA Team of the Year twice, I had two really good seasons with Arsenal - I just felt at ease.

"I felt like I didn't need to hide or be ashamed anymore."

Stoney's partner Megan Harris gave birth to twins in November 2014, and there were further celebrations the following summer as Stoney was awarded an MBE in the Queen's birthday honours. The couple's third child is now on the way.

"The only way you can change the world is if you make the difference in yourself," says Stoney.

"As much as I'm a role model to all the young girls out there who want to play football, and all the football fans, the most important role model I am now is to my children.

"I want them to look up to me and be proud, and be proud of their mum as a footballer, but most importantly as a person."

Don't miss Casey Stoney on My Icon: Rainbow Laces. All My Icon episodes are also available on Demand.