Off Script: Gary Neville on football's decade of change

"Five years ago, we weren't getting our pound of flesh. But Klopp, Pep, Conte, Mourinho, and Poch have transformed our fortunes."

As we approach the end of the decade, Sky Sports' Gary Neville reflects on 10 years of change in football, from social media to coaching.

Why football is better now

Neville is certain football is better in 2019 than it was 10 years ago, and puts most of that down to the influence of foreign coaches, in particular Pep Guardiola, Jurgen Klopp and Mauricio Pochettino...

"The game is better. Twenty years ago, I was playing against teams who were playing 4-4-2 nearly every week, with a direct style, very predictable. They would double up on full-backs, with a very conservative approach.

"I'm not saying this because I'm a Sky pundit - I should be saying my game that I played in was great, and it was, I loved it like you wouldn't believe - but the introduction of Pep Guardiola, Jurgen Klopp, plus Jose Mourinho and Mauricio Pochettino, have been outstanding for the game in the last three or four years. The fitness of the players is incredible, and the stats are there to back it up. They're running further and faster, more passes, more goals, and we're now seeing wingers play at full-back, and teams who even play attacking centre-backs.

"The game is just more positive. The majority of teams will go for the victory, will press high; the majority of players want an inventive style of football, and it is better. There is no doubt about it. Coaching has changed a lot, and I think the game is better for it. The game is just more positive. The majority of teams will go for the victory, will press high; the majority of players want an inventive style of football, and it is better.

"If you'd have asked me four or five years ago, I'd have said we weren't getting our pound of flesh for the money we were investing into the game. The quality was quite poor. But Klopp, Pep, Conte, Mourinho, Poch - those five coaches in the past five years have produced some outstanding football, it has been incredible. And that has transformed our fortunes in Europe, and we've taken back over from Spain and Germany in being the most dominant performers in European competition."

Players have nowhere to hide on the pitch

Neville believes the introduction of deeper technology into football, both in stadiums and on the training pitch, means players have nowhere to hide, and in-turn means today's players are at their maximum...

"I remember Nicky Butt once at Anfield, giving away a penalty with a handball, and at half-time he said to us he didn't handball it - he thought the cameras wouldn't pick it up, because there were maybe only seven or eight cameras at the game! You can't say that now - how many cameras do we have here today, 35? Everything is spotted, and as a player, everything is scrutinised. Players have got nowhere to hide... It started to come in just before I retired, and I remember thinking: 'Pfft, I'm just getting out of here at the right time!'

"I remember when Steve McClaren was the coach at United in the early 2000s, and they used to have ProZone technology at that time, and it literally monitored every single position we had during the game. So, if after the game I said I was in the right position for a goal, he could prove that you weren't by Monday, and the evidence was there. So it got to a point where you felt a little bit like it was Big Brother. In the past, you might think about two yards out of position wouldn't be picked up by the cameras, but it would be picked up by the monitor.

"Players have got nowhere to hide. They're strapped up to monitors every single morning, their immune system is measured, their hydration level is measured, their nutrition is monitored to the nth degree, their fitness levels are specific and bespoke to the player, rather than the team. It started to come in just before I retired, and I remember thinking: 'Pfft, I'm just getting out of here at the right time!"

The players are assets... so look after them

Neville has seen the advancement in player treatment first hand, and explains how players are more likely to look after themselves now than they were in decades past...

"We've seen Olympic athletes over the years, of really high quality, and football lagged behind it in terms of its discipline and professionalism. There was a big jump in terms of the drinking era being banished, but there was almost a sort of resistance to go with new methods, or a resistance to challenge ourselves by looking at other sports. Now the gloves are off, and the adaptation of sports science centres within football is incredible, and we're spending just as much money on that.

"The players are the assets. They're spending that much money on the players, and if you can keep him fit, you've got a better chance of winning games, which in turn means the player has a better chance of keeping his value. So of course, you'd heavily invest in that, and that's what's happened.

"We're also talking about them having their own little medical centres within their own home. The ice baths, the massage tables, the types of facilities that are now built into their homes. In my time, players were just starting to have that sort of 'home service'. You could call it pampering, but it's not, it's injury prevention.

You shouldn't finish at 1pm in the day, and think you've finished your job.

"You shouldn't finish at 1pm in the day, and think you've finished your job. You should be stretching in the afternoon, making sure that your legs are prepared, have an ice bath and not take any chances the day after a game.

"When I was playing, I lived in No 1 Deansgate in Manchester. I thought I was being professional by having my own bike on the balcony. I would go and do 20-minute warm-downs the day after a game, do my own stretch, do my own warm-down. That was, at that time, cutting edge. I don't think everyone was doing it, some were, some weren't, but now we're talking about a completely different level. Machines at home, therapies at home, it's incredible.

"But it's right. Why wouldn't you look after yourself? It's your body, the thing that will protect you the most during your career, and is going to earn you the money."

With the increasing influence of social media throughout the decade, Neville strongly feels players should keep their own character rather than offloading their publishing duties, and advises players to set themselves up for a career after football...

"Each player is a business. I started to see it with David Beckham, not in a sense of medical treatment or coaching, but in terms of the off-field stuff. The lawyer, the accountant, the PR manager, the agent, the social media manager. That was the first sort of modern icon in terms of really looking to put a business around himself. It's clever. Now every player, with the money they're earning, is able to make sure of this.

"But there is pressure. There are a couple of disadvantages to what we just talked about. I disagree wholly with players' social media accounts being managed by other people. That is your personality, it's your character, your speech - you should tell us what you're like. Players will be better off in the end if they demonstrate their personalities during their career. We've seen over the last few years, Raheem Sterling has gone from someone who was awkward in interviews, and made mistakes before he left Anfield, to someone now who has become a spokesperson. There are genuinely great examples of where people take the shackles off, lose the advisors in their ear a little bit, and show their own personality.

"Players should make sure they are not letting other people get them to the end of their career at 35, where you've never done a proper interview, you've never sent a tweet, and all of a sudden you're thinking, what am I going to do for the next 30 years? All of a sudden you've fallen off the edge of a cliff, your stimulation, your skill levels, your understanding of what you're going to do next is gone.

I disagree wholly with players' social media accounts being managed by other people. That is your personality, it's your character, your speech - you should tell us what you're like.

"Players are smart. Just 25 years ago, you could get managers and senior players saying: 'Go on, sign that contract, it's a good contract for you' and you'd do it. Now, players are a lot smarter, have good independent advisers, accountants, lawyers. I was a big advocate of doing my own contract and not having an agent. Having come eight years out of the game, I understand why players would have an agent and why they need advice.

"If I was still a player, I would make sure that I attended all of the major meetings that your agent does, so you can improve your own development in your own mind. There comes a point where you want to become that person who stands on their own two feet.

"You could be a 16 or 17-year-old earning £50 a week, who all of a sudden within a year-and-a-half is earning £50,000-a-week. They need advice! Think about the lottery winners, some of the horror stories you hear from them, where all of a sudden they've got the money, they don't know how to spend it, how to invest it, and they have people sponging off them. That is a footballer's existence, and these young lads are not angels, they've come from the same streets we've come from, and they've just been very fortunate, have worked hard and been skilful enough at football to earn that money. There needs to be that level of understanding, but players need to understand that they need to build a different skills base and understanding of the environment they're in."

Where will the game go?

So where is the game going? Neville believes clubs will let fans behind the scenes even more in the coming years, and also insists we must keep the very best coaches in the English game...

"The game-changer, which is already happening before our eyes, is for everything to become recorded. For football to become online, digital, every minute of every day. I'm amazed that football clubs are not filming training live to the fans around the world and monetising it. The fans want to hear from the players, they want to hear from the coach, and not just in their professional nature. It's coming. 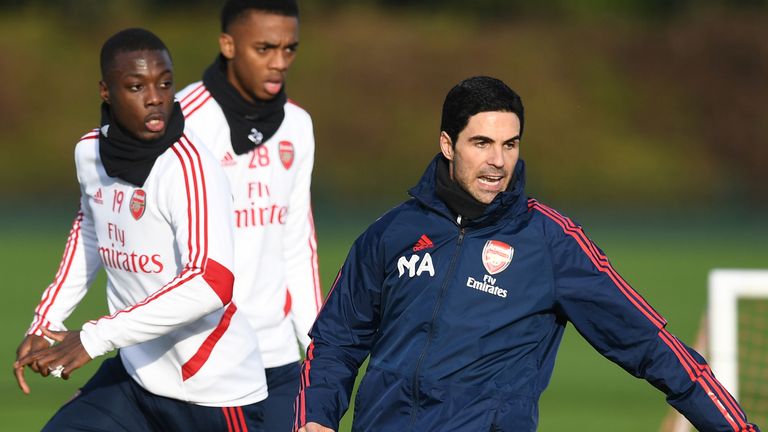 I'm amazed that football clubs are not filming training live to the fans around the world and monetising it... It's coming.

"Ultimately there will be tactical aspects of training not recorded, maybe 20 per cent, 30 per cent of the session, but the warm-up, the passing session, the shooting, the crossing, and the little five-a-side at the end, will be filmed and beamed out to everybody who wants to subscribe to it. It will happen in the next five to 10 years. Players will give live interviews on their way to training. 'We'll be talking to Wayne Rooney on the drive in, talking about his training session today, what he had for dinner last night, what his nutrition base is...' It will happen, more detailed, more forensic, because content is becoming king.