Non-League Chorley claimed an unlikely place in the FA Cup fourth round as they proved too strong for a youthful Derby side in an extraordinary tie.

Connor Hall and Mike Calveley were the men on target as the National League North side claimed a 2-0 victory in what was theoretically an upset on a freezing afternoon in Lancashire.

Yet with the Championship visitors decimated by a Covid-19 outbreak at their club, the four division gap between the sides was wiped out, handing the initiative to the part-timers.

Derby, with interim manager Wayne Rooney and their entire first-team squad isolating, were forced to field a team made up from their youth sides in order to fulfil the fixture. 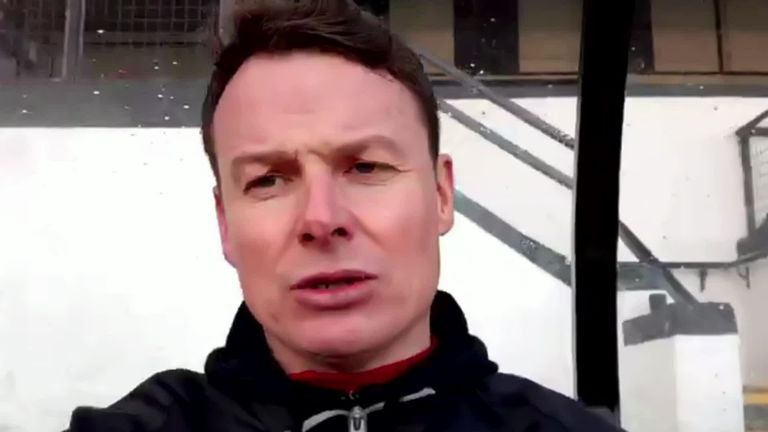 There was an early flashpoint when Derby's Cameron Creswell went down in the Chorley area, referee Kevin Friend ruled against a penalty after help from his linesman, but the home side took the lead with just 10 minutes on the clock when Hall got the final touch after the Rams failed to clear a corner.

The non-League side continued to dominate but had to wait until six minutes from time to seal the win when Calveley volleyed in from close range.

Burnley and Man Utd through, West Brom out on penalties

Sam Allardyce's wait for a first win in charge of West Brom continues after the Baggies were dumped out of the FA Cup by Sky Bet League One Blackpool, losing a penalty shootout 3-2.

Seasiders captain Chris Maxwell, playing his first game since December 19 after testing positive for Covid-19, saved spot-kicks from Kyle Edwards, Darnell Furlong and Matheus Pereira to give Blackpool their first FA Cup win over
top-flight opposition since they beat Burnley 1-0 45 years ago.

The match had finished 2-2 after 90 minutes, with West Brom needing a slightly fortuitous penalty from Pereira with 10 minutes left to extend the contest after Jerry Yates and Gary Madine struck either side of Semi Ajayi's equaliser.

Though Yates missed the opening penalty to hand West Brom the advantage, they could not take it as Maxwell saw his side through to the fourth round.

Burnley avoided an upset with a 4-3 penalty shootout victory over League One MK Dons at Turf Moor.

The Dons led through Cameron Jerome's 29th-minute header but Burnley substitute Matej Vydra grabbed an equaliser in the final minute of injury time to make it 1-1.

Vydra saw his opening spot-kick saved by Lee Nicholls but Burnley's debutant keeper Will Norris proved the hero with stops from Lasse Sorensen and Ben Gladwin before Phil Bardsley rolled in the winning penalty.

Meanwhile, Scott McTominay's early goal helped Man Utd beat Watford 1-0 on Saturday night. The Scotland midfielder, who was captaining his side for the first time, bounced a header into the roof of the net just five minutes into the tie at Old Trafford.

Emile Smith Rowe came off the bench to fire holders Arsenal into the FA Cup fourth round with an extra-time goal against Newcastle - but only after he had a red card overturned by VAR.

The substitute was given his marching orders by referee Chris Kavanagh for a tackle on Sean Longstaff at the end of the 90 minutes, but the card was downgraded to a yellow after the pitchside monitor was used.

It proved decisive with Smith Rowe grabbing the opener in the 109th minute before captain Pierre-Emerick Aubameyang confirmed the victory eight minutes later with a tap-in to wrap up a 2-0 success.

The Italian left out top scorer Dominic Calvert-Lewin, Richarlison and goalkeeper Jordan Pickford, but their replacements were second-best for much of the 120 minutes at Goodison Park.

Sheffield United also came through a nervy contest to finally secure their first win of the season as they beat Bristol Rovers 3-2.

Rovers defenders Alfie Kilgour and Max Ehmer had twice equalised from set-pieces but United held their nerve to finally win at the 19th attempt this season.

Fulham also reached the fourth round - but needed extra-time to see off neighbours QPR.

Lyndon Dykes missed a gilt-edged chance to win it in normal time for Championship Rangers but substitutes Bobby Decordova-Reid and Neeskens Kebano struck in the extra period.

Leicester advanced in comfortable fashion as they beat Stoke 4-0 at the bet365 Stadium.

James Justin put the Foxes in front with a fine strike in the 34th minute and Marc Albrighton doubled the advantage with a 59th-minute finish, before Ayoze Perez and Harvey Barnes added further gloss for a side that did not need Jamie Vardy or James Maddison.

Josh King netted his first two goals of the season as Bournemouth swatted aside League Two Oldham with a 4-1 victory at the Vitality Stadium.

Forward King has missed a large chunk of the campaign due to injuries and illnesses after failing to depart Championship Cherries in the summer transfer window.

But the Norwegian, linked again with a Janaury exit, scored a classy brace and also set up Rodrigo Riquelme, after David Brooks and Dylan Bahamboula - from the penalty spot - exchanged first-half goals.

Earlier, Lyle Taylor ended his longest goal drought since October 2017 to fire Nottingham Forest into the fourth round of the FA Cup with a 1-0 win against Cardiff.

Taylor took less than three minutes to claim the only goal of the game and his first in 13 outings, meeting Gaetan Bong's cross with a firm volley from 10 yards.

Junior Hoilett flashed a late volley high and he also hooked another opportunity wide over his shoulder but Forest kept things tight to made it six games unbeaten en route to the fourth round.

An assured sixth-minute finish from Kenny McLean and a firm header from Jordan Hugill 80 seconds later settled a game that rarely hit the heights after an exciting start that saw the Sky Blues wasting three early chances before Norwich converted two of theirs.

George Moncur scored the only goal of the game in the first half as Luton beat fellow Championship side Reading 1-0 in the FA Cup.

Millwall avoided a potential banana skin at Meadow Park as they comfortably overcame Boreham Wood 2-0 to advance to the fourth round.

Kenneth Zohore opened the scoring on the half-hour mark after being fed by Scott Malone, and after Boreham Wood's Matt Rhead put an effort over the bar from less than 10 yards out, Shaun Hutchinson's header (74) sealed the contest.

Sheffield Wednesday later followed suit, overcoming a coronavirus outbreak and a gallant Exeter to book their place in the fourth round with a 2-0 win at St James Park.

The Owls had to shut their training ground this week due to a "significant number" of Covid-19 cases but they were still able to field a strong side against their Sky Bet League Two opponents and goals from Adam Reach (28) and Callum Paterson (90) staved off an upset.

But League One high-flyers Doncaster caused an upset by defeating Championship Blackburn 1-0. Taylor Richards' third goal of the season three minutes before half-time - assisted in no small part by an Aynsley Pears howler - was enough to put Darren Moore's men into the draw for the fourth round.

Wycombe reached the fourth round for only the third time in their history thanks to a dominant 4-1 win over Preston.

Goals from Fred Onyedinma, Joe Jacobson and Josh Knight had the Chairboys 3-0 up after just 25 minutes, and though Emil Riis pulled one back from the penalty spot just before half-time, Alex Samuel put the tie to bed late on.

Later on Saturday, League One Plymouth came from behind to win 3-2 at Huddersfield, while Brentford - beaten in the Carabao Cup semi-finals by Tottenham in midweek - beat Championship rivals Middlesbrough 2-1 in a game during which Boro winger Marcus Browne was taken off on a stretcher with a knee injury.

Saturday's game between Southampton and Shrewsbury was postponed after a coronavirus outbreak.

The FA Cup schedule has been confirmed, with the final scheduled at Wembley on Saturday, May 15.

The draw for both the fourth and fifth rounds will take place on Monday, January 11, ahead of the third-round tie between Stockport and West Ham.