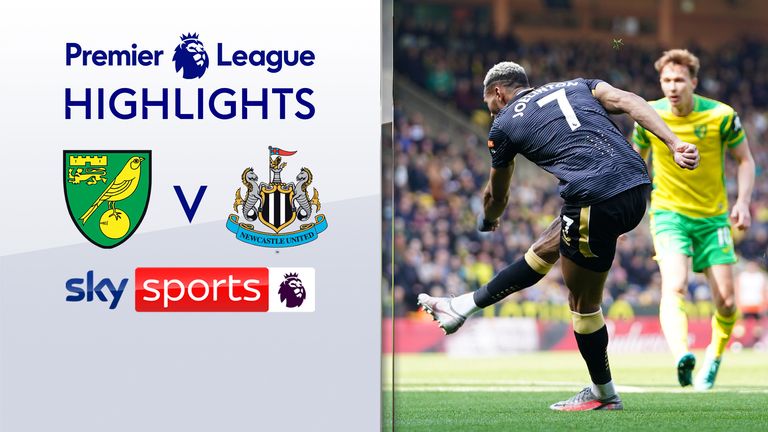 FREE TO WATCH: Highlights of Newcastle's win against Norwich in the Premier League.

Joelinton hit a six-minute double on his 100th Newcastle appearance before his Brazilian compatriot Bruno Guimaraes netted a delightful chip to inflict a 3-0 defeat on rock-bottom Norwich.

Eddie Howe's side are now up to ninth in the Premier League table following their fourth consecutive victory, while the Canaries are on the brink of relegation back to the Championship.

Joelinton scored both of his goals in the first half, the first a wonderful strike into the top corner and the second a tap-in just before the break.

Guimaraes then wrapped up the points four minutes into the second half by capitalising on a mistake from Tim Krul and coolly dinking the ball back over the Norwich goalkeeper.

Newcastle cruised to victory from there as Norwich suffered a 22nd defeat of the season to edge ever closer to the drop.

Dean Smith made just one change to his side that were beaten 3-2 at Manchester United last weekend.

Centre-back Ben Gibson dropped to the bench with Christoph Zimmermann taking his place.

Eddie Howe made four interesting changes to his team which beat Crystal Palace 1-0 on Wednesday.

The match winner Miguel Almiron dropped to the bench and so did Jonjo Shelvey. Joe Willock came in along with Sean Longstaff.

How Joelinton and Guimaraes sunk Norwich

Norwich started the day eight points adrift of safety and began well once Jacob Murphy had volleyed wide from Guimaraes' ball forward. The hosts saw Kieran Dowell spurn a similar chance as he tried to lob goalkeeper Martin Dubravka, but it was his second miss moments later which was the better opportunity.

Pierre Lees-Melou drove through the Newcastle midfield on the counter-attack and played Teemu Pukki in. The striker rounded Dubravka but took the ball too wide to take a shot on. He waited for support, but his pass was slightly behind the fast-arriving Dowell, forcing him to shoot over from close range.

Newcastle centre-back Dan Burn then headed just wide with a near-post header before the Toon took the lead in the 35th minute. The visitors got down the Norwich left through Murphy, who centred the ball for Allan Saint-Maximin, whose square pass for Sean Longstaff was overhit, but it came to Joelinton to smash first time into the top corner.

Man of the match: Joelinton

The goal survived a VAR check for a possible offside on Murphy, and Newcastle were celebrating again moments later. Norwich were split wide open by Guimaraes' pass which Murphy latched onto. His shot was blocked, but the ricochet fell perfectly for Joelinton to tap in an easy second.

Any hopes of a Norwich comeback from 2-0 down, in the manner of last week's performance at Manchester United, were ended just four minutes into the second half. Krul tried to play out from the back but passed straight to Guimaraes, who then delightfully chipped the ball over the 'keeper.

Krul then made saves from Saint-Maximin and Joelinton as Newcastle enjoyed themselves in the sun at Carrow Road, while the hosts saw Dowell's free-kick pushed away by Dubravka.

Joelinton's hat-trick hopes were cut short when he had to come off through injury in the 67th minute, but his team-mates were able to see out their latest victory in first gear.

"Today, there was nothing in the game until the first goal. We probably had the better moments and didn't take them, and then we didn't defend well enough for their goals. If you make mistakes at this level you get punished.

"The league table doesn't lie, we've been punished too many times for our mistakes and, unfortunately, we keep on making similar mistakes that have cost us in the end."

Newcastle manager Eddie Howe: "It was a tight game until we scored the goal. We weren't particularly happy with how we started but once we scored, we showed a different level in our play.

"We scored some great goals today, really pleased for Joe, 100th appearance and you saw the scenes at the end there, brilliant moments for him especially knowing the journey he's had at the club. A great day for us."

On being ninth in the Premier League: "When you look back and think of some of the days we had early on, the Cambridge defeat, the late equaliser Watford scored, those were difficult moments and we were a long, long way from where we are now.

"It's taken an incredible effort from the players, staff and supporters to lift us into the position we are. I can't thank everyone enough what they've given me and the team."

Up next for Norwich is a return to Aston Villa for Canaries head coach Dean Smith as they play Steven Gerrard's side next Saturday; kick-off 3pm.

Next for Newcastle is a home game against title-chasing Liverpool in the lunchtime kick-off next Saturday at 12.30pm.