Report and highlights from the Sky Bet Championship clash between Nottingham Forest and QPR at the City Ground as Alex Mighten, Lewis Grabban and James Garner fire Chris Hughton's side to victory on Easter Monday. 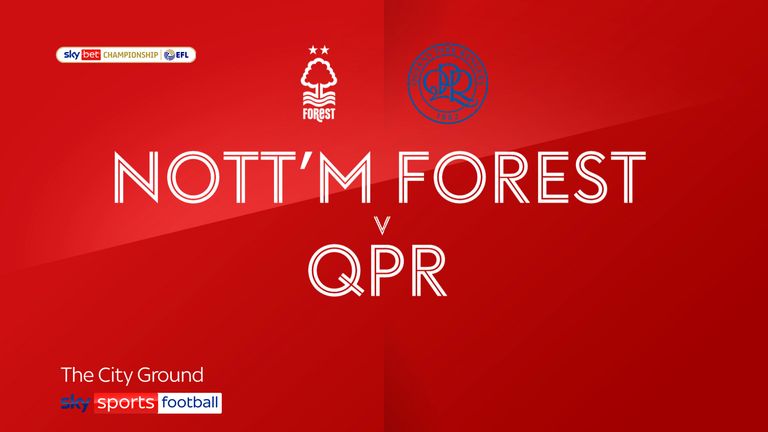 Highlights of the Sky Bet Championship match between Nottingham Forest and QPR.

Nottingham Forest scored three goals in a game for the first time in two months and took a giant step towards Championship safety with a 3-1 win over QPR at the City Ground.

Chris Hughton's side had gone 11 games without scoring more than a single goal in the space of 90 minutes, following a 3-0 success over Wycombe in early February.

But a first-half goal from Alex Mighten, followed by strikes from Lewis Grabban and James Garner after the break helped them notch up another emphatic success, this time at the expense of former Forest boss Mark Warburton.

Substitutes Albert Adomah and Lyndon Dykes combined in injury time, with Dykes heading home a consolation goal. But it was Forest who claimed a win that took them to 48 points in the Championship.

Cyrus Christie's cross picked out Grabban, but his effort was wayward as the home side looked to make an early impact.

Ryan Yates was close to scoring when he attacked a James Garner corner with a powerful header, but his effort was blocked on the line.

Sammy Ameobi tried to place a shot from just outside the box, but could not find a gap between a cluster of players. Filip Krovinovic forced a smart save from Seny Dieng with a curling shot fired across goal.

QPR did not create a meaningful opportunity until Stefan Johansen drove a decent opening wide from the edge of the box.

Forest pushed again as Krovinovic lashed an instant shot that rose too high.

But they did make the breakthrough in the 44th minute, as Ameobi showed great determination to battle his way into the penalty area from the right flank, before firing a low cross across goal for Mighten, who slid in to force the ball over the line.

Forest were close to a second after the break, when good work from Grabban created a chance for Ameobi, who saw his shot saved, with Mighten close to pouncing on the rebound.

Mighten fired into the side netting after being picked out by Tyler Blackett. Dieng had to make a great save to keep out a Garner free-kick and then to stop a low shot from Yates.

It was deserved when Forest made it 2-0, with Christie brilliant in the build-up to a goal that eventually saw Krovinovic feed Grabban, who hit a shot on the turn to send the ball arrowing into the top corner from 20 yards out, in spectacular fashion.

That goal came in the 63rd minute and, six minutes after that, it was 3-0 as Garner's dangerous free-kick delivery from the left side bent all the way inside the far post, with keeper Dieng caught out.

Dykes headed home three minutes into stoppage time for QPR but it was the final act of the game.

Nottingham Forest's Chris Hughton: "This has been our best performance in terms of creating chances, of getting into good positions and creating good chances. So I am really pleased, because it has been a good weekend for us, following the win at Cardiff. In terms of our all-round performance, this was one of our better ones. This was always going to be a completely different game. But we wanted the same from our team. We were able to show that. We created a lot of chances and we got what we deserved.

"Lewis will have enjoyed his goal - and all three were different goals. But his was a really good striker's goal. He has that ability. It has been a difficult stop-start season for him, with him being out with injury for a period of time. But he was very good today. Now we want to finish the season as best as we can. What is not yet fact is that we are safe. Everyone is fighting below us. What is fact is that we are playing well enough that we can look forward to the remaining games and hoping to finish as strongly as we can."

"We cannot be below our best, we cannot be complacent, because teams like this will hurt you. But there are demands on these players that we are asking of them. Both teams looked tired in the first half. But we looked slow with the ball, which is not like us. To give a goal away like that in the 44th minute was very poor on our part. We gave them something to hold on to. They are a good team, they defend well. They played well."