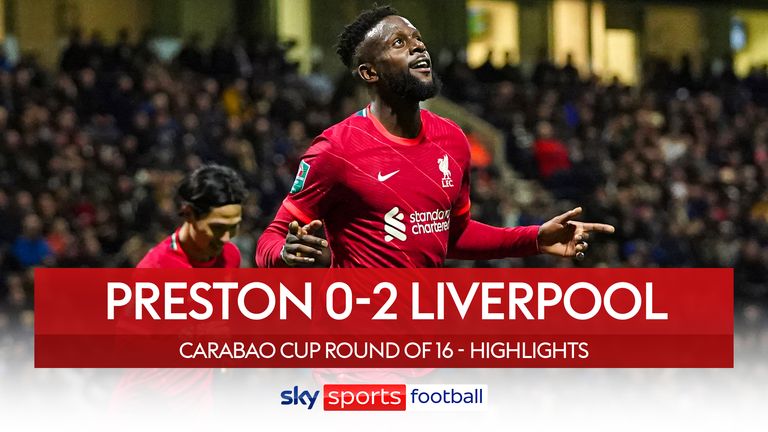 Highlights of the Carabao Cup Fourth Round match between Preston and Liverpool.

Divock Origi's audacious scorpion-kick helped Liverpool book their place in the Carabao Cup quarter-finals after seeing off Championship side Preston at Deepdale.

Jurgen Klopp made 11 changes to his Liverpool side following Sunday's 5-0 win at Manchester United, and Preston passed up several good opportunities in the opening period.

Brad Potts' effort, when put through on goal, was tipped over by Adrian before a flurry of chances in quick succession which saw Sean Maguire, Ryan Ledson and Potts all fail to convert.

But after Takumi Minamino volleyed home Neco Williams cross (62), Origi's improvised finish with his back heel when airborne settled the contest (84) - with the quarter-final draw taking place on Soccer AM from 10.30am on Saturday morning.

Man of the match: Neco Williams.

This was the first meeting between Preston and Liverpool since January 2009, with the Reds winning 2-0 at Deepdale in an FA Cup tie.

Harvey Blair - who has been at the club since he was 12 - made his senior debut for Liverpool while another 18-year-old Tyler Morton was making his full debut.

Divock Origi, who has scored 10 goals in his last nine Carabao Cup starts, led the Liverpool attack alongside Takumi Minamino while Joe Gomez and Joel Matip were partnered in defence.

Six players who started the 3-0 win over Norwich in the previous round were named in Klopp's XI, while there were places on the bench for Roberto Firmino, Ibrahima Konate and Diogo Jota.

Ali McCann returned in Preston's midfield while on-loan defender Sepp van den Berg lined up against his parent club after being granted permission - one of only two survivors from Saturday's 2-0 loss to Blackpool.

Preston were looking to reach the League Cup quarter-final for the first time in their history, and while Jurgen Klopp's much-changed outfit dominated the possession with 79 per cent of the ball in the opening period, it was the Championship side who carved out the only chances.

Potts was released by Maguire after 25 minutes and with Joe Gomez in pursuit, the Preston midfielder's shot was tipped over by Adrian.

Three minutes later, Preston were wondering how they hadn't scored. Gomez was sloppy in possession as Joe Rafferty slipped a fine ball down the flank for Ali McCann to cross and after Adrian had made a brilliant save to deny Maguire, Ledson's rebound was cleared off the line by Neco Williams before Potts cleared the crossbar with his effort from point-blank range. 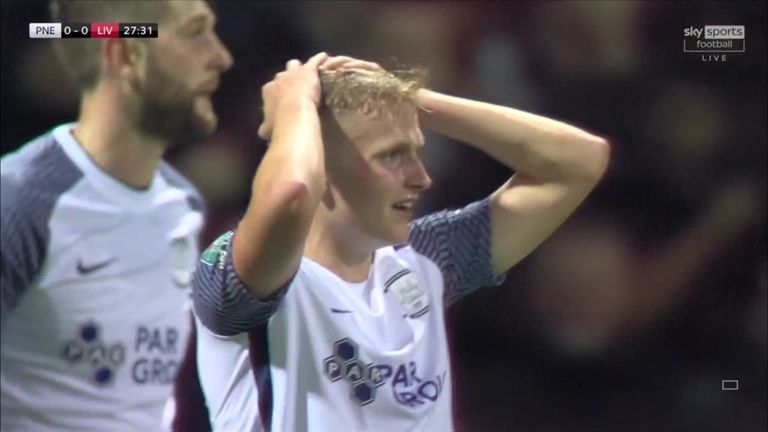 Preston had three glorious chances in quick succession to score against Liverpool but failed to hit the back of the net in their Carabao Cup tie.

Sky Sports' Andy Hinchcliffe said on commentary: "Maguire should be tucking that home and then it's a sensational piece of defending from Williams on the line to keep the rebound out. For Potts, the ball is slightly behind him but Maguire should be burying that. Liverpool are living dangerously."

Liverpool had progressed from 16 of their previous 17 League Cup ties against sides from a lower division, with the exception being a shootout defeat to Northampton Town in 2010/11, and Klopp opted to make a change at the break as Nat Phillips replaced Joel Matip.

There was evidently greater urgency as Alex Oxlade-Chamberlain chopped inside to drill a fierce right-foot shot a yard wide. 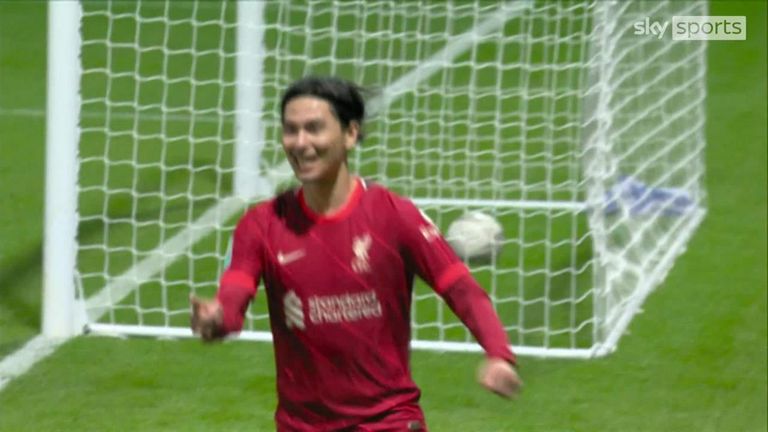 Takumi Minamino puts Liverpool ahead against Preston in their Carabao Cup tie with a close range flick from a Neco Williams cross.

Klopp then opted to push Williams further forward as Conor Bradley replaced Blair and moved into right-back - and the move paid instant dividends.

There were question marks over offside as Morton looked up and spotted the run of Williams, but with VAR not in operation, the Wales international was able to take the ball down and cross for Minamino to guide his volley beyond Rudd. 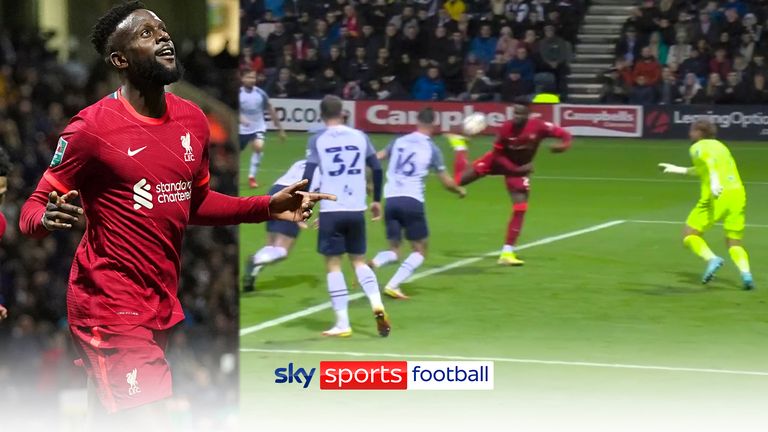 Frankie McAvoy sought a response as Scott Sinclair, Ben Whiteman and Daniel Johnson were all introduced in the final 10 minutes but Liverpool put the tie to bed in quite sensational style.

Kostas Tsimikas's cross inadvertently crashed against the crossbar but Williams was again alert to the dropping ball as he turned inside to shoot and after a deflection had taken the ball behind Origi, the Belgian brilliantly readjusted his feet to hook his effort beyond Rudd.

Williams should have added a third when he raced through on goal moments later, denied by Rudd, but further goals would have been harsh on Preston.

Man of the match: Neco Williams

"It's not been a great team performance by Liverpool but Neco Williams has played in two positions tonight and played well. Individually he's done so well.

"He's been involved in both goals, and he had the goal-line clearance in the first half to keep Liverpool afloat. He's had a very good night having come back from injury."

Williams told Sky Sports: "Preston are a good side, they gave us a good game. We didn't play our best football but we did enough to get the win and we're happy with that. The team put a shift in, we worked them."

On his goal-line clearance: "It smashed me in the mouth and I didn't remember much. I was there on the line and I thought I'd have a good chance of blocking it. Luckily it's smashed me in the face and stopped a goal."

On his own performance: "I tried to play as high as I can. I should have got on the scoresheet but never mind, hopefully next game I score. I think I did well, I gave everything I had. I got a bit of cramp towards the end but I think that's just down to hard work." 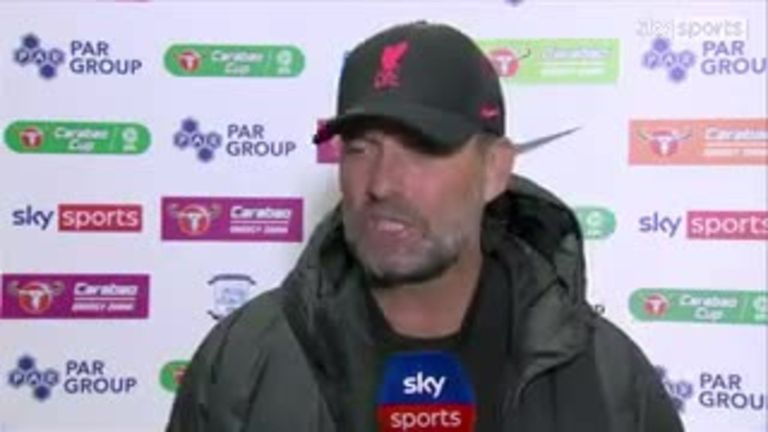 Jurgen Klopp was pleased that Liverpool avoided a potential banana skin against Preston to progress to the Carabao Cup quarter-finals after a 2-0 win at Deepdale.

Liverpool boss Jurgen Klopp: "We didn't play particularly well to be 100 per cent honest and Preston played long balls. They were tricky to defend and they had their moments. The game was open and we lost our structure in the first half which never helps in football.

"We couldn't create too much but the little change helped. The game for Harvey [Blair] in the first half was really not easy and we didn't really involve him in the game. We decided to change things by pushing Neco a bit higher and it worked really well.

"Divock showed his skills for the second but Preston played a really inspired game and the atmosphere was nice. No one got injured so it's a perfect night."

Preston boss Frankie McAvoy: "I felt our game plan was excellent. We knew they'd have a lot of the ball. I've just seen the stats, we both had nine attempts each, four on target. There's not many teams that will limit Liverpool to fewer opportunities.

"That's credit to the players, they gave me everything. I'm just so disappointed. After Saturday's result I was hoping we could have a fantastic result tonight and send the fans home happy. It wasn't to be but it wasn't for the want of trying. I think you can hear in my voice I'm gutted."

"It's a great result for Liverpool as it wasn't easy. In the first half, Preston could've been one or two goals ahead, but in the second half, Liverpool just had that little bit of extra quality in front of goal that Preston didn't quite have.

"Origi has had some amazing moments for Liverpool and that goal was quite incredible. We've seen improvisation like that before from the likes of Olivier Giroud and Henrikh Mkhitaryan and this is just an incredible finish."

What's next for Preston and Liverpool?

Preston host Luton in the Championship on Saturday at 3pm while Liverpool take on Brighton at Anfield in the Premier League at the same time.