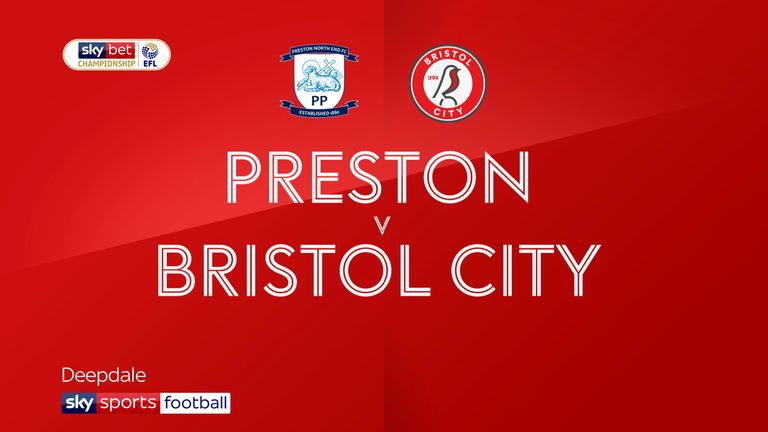 Preston stretched their unbeaten run to six Championship games in a dramatic 3-3 draw with Bristol City at Deepdale.

First-half goals from Taylor Moore - his first for Bristol City - and Andreas Weimann put the visitors in the ascendancy.

Paul Gallagher dragged Preston back into the game before the break and Daniel Johnson levelled, only for Nathan Baker to restore Bristol City's lead.

Both sides had opportunities to score in the opening stages of the game, with a flurry of chances at both ends in an action-packed first half.

With such an open start to the game, an early goal was almost inevitable, and Moore edged the visitors in front on the half-hour mark.

Rowe's corner was flicked on by Ashley Williams and, with the Preston defence unable to clear their lines, the full back reacted quickest to turn the loose ball home from close range.

With the Lilywhites still looking to get a foothold in the game, Lee Johnson's side doubled their lead seven minutes later.

Preston failed to learn their lesson over marking at corners, as Weimann stole in front of two defenders to flick home a header from Josh Brownhill's set piece.

Alex Neil's side were thrown a lifeline on the stroke of half time, after Han-Noah Massengo caught Johnson inside the penalty area, with Gallagher dispatching the resulting spot-kick.

The hosts' fortune continued after the break, as they were awarded a second penalty on 51 minutes after Williams handled Maguire's cross.

This time Gallagher passed responsibility over to Johnson and he calmly sent Daniel Bentley the wrong way from 12 yards.

From there, the game turned back into the visitors' favour, with Kasey Palmer denied by Rudd before Johnson's side regained the lead on 62 minutes.

Brownhill was once again the architect against his former side as his whipped free-kick caused problems in the Preston box, with Baker reacting sharply to poke home from a yard out.

However, Preston were not finished yet, as defender Bauer got above his man to head home Joe Rafferty's corner after 70 minutes and ensure a share of the spoils for the home side.

Preston boss Alex Neil: "At full-time I am happy, given the way that the game has gone. I think that if you are able to get a point from a game, after being two goals down at one stage, then you have to be happy with that.

"For me, the bigger issue is the way in which we conceded the three goals. I am very unhappy about how we have defended today, particularly from set-pieces and that is something that we need to look at this week."

Bristol City boss Lee Johnson: "Overall, I am happy that we are able to take something away from the game, even if it is not the result I wanted.

"I think the players showed real bravery throughout, not just in defending, but in the way they wanted to take the ball in key areas and show what they can do. That gives me plenty of confidence that we can build on what we have done today."