Report and highlights from the Championship clash between QPR and Watford at the Kiyan Prince Foundation Stadium as Ilias Chair scored a late equaliser for the home side after Ben Wilmot had put the Hornets ahead. 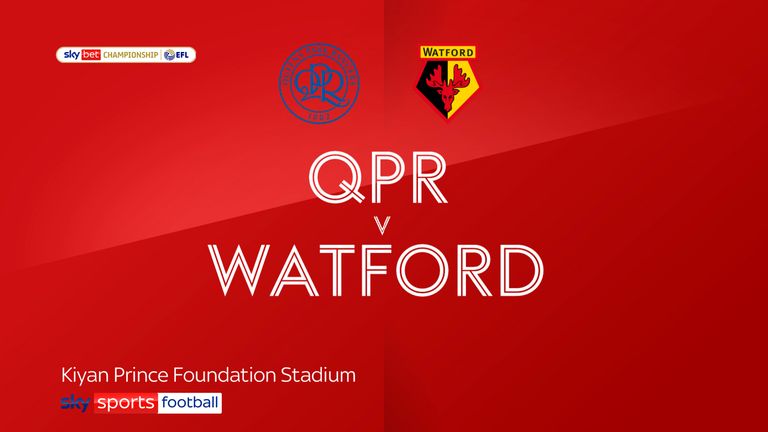 Highlights of the Sky Bet Championship match between Queens Park Rangers and Watford.

But Rangers had several chances before Chair rounded off a slick team move with a cool finish.

It denied Watford a third consecutive win - and one which would have taken them top of the Sky Bet Championship table - as QPR recovered well after an early defensive lapse.

They were undone by a corner routine and inexplicably failed to deal with Ken Sema's low delivery from the left, allowing the unmarked Wilmot to tap home from a couple of yards out.

Rangers went close to equalising on four occasions before half-time.

Striker Macauley Bonne had a header cleared off the line by Etienne Capoue and later headed wide when unchallenged after being found by Tom Carroll's ball into the box.

And Watford keeper Ben Foster produced a fine save to deny Dominic Ball at point-blank range after the midfielder had been teed up by Chair's cut-back from the left.

QPR continued to threaten after the interval and appealed in vain for a penalty when Bonne went down under a challenge from Sema.

Rangers manager Mark Warburton made a double substitution shortly before the hour mark in an attempt to find an equaliser, sending on Scotland striker Lyndon Dykes and former Arsenal youngster Chris Willock.

Dykes provided the home side with more of a physical presence up front and Watford found themselves under sustained pressure.

The Hornets survived another scare when Carroll's right-wing free-kick was headed onto the top of the net by Conor Masterson.

But QPR's persistence was finally rewarded with Chair's third goal of the season.

Niko Hamalainen surged forward from left-back and played the ball into Dykes, who cleverly set up Chair with a deft flick into the Moroccan's path. Chair took full advantage, slotting the ball beyond Foster and into the far corner of the net.

Dykes, yet to score for QPR in open play, used his hand to direct an injury-time cross from Carroll into the net and was booked as Watford wilted in the closing stages and seemed grateful to escape with a point.

QPR's Mark Warburton: "It wasn't a lucky point - I thought we more than deserved it and actually we dropped two points against a very good team. We gave away a really poor goal in the first two minutes from a corner but then the reaction was very good.

"It's all about how you react and I thought we responded very well. We won the duels, played forward and through midfield. We looked a good team and as the game went on I thought we looked stronger and stronger."

Watford's Vladimir Ivic: "I'm disappointed - and I would say that even if we had won, it doesn't matter that it was a draw. That was not how I want my team to play. We played without passion and without energy from the beginning - we were lucky we scored in the second minute of the game. We need to talk about it and analyse it, but it's too soon to do so now. The truth is that we had a problem.

"You can prepare tactics and do what you think is good for the team, but if you don't have the winning mentality and don't show this then you won't win. I believe that was our problem today - we were too soft. That's not what I want from my team. What matters is the performance. You can lose a game and play well, but that performance today was not what I want."