Liverpool's night got even worse when Trent Alexander-Arnold's poor header gifted Real Madrid a second, Marco Asensio lifting the ball over Alisson Becker and into the back of the net 11 minutes before the interval.

Klopp reacted just before half-time, hauling off Naby Keita and bringing on Thiago Alcantara, and they started the second half in much better fashion.

They were rewarded with a precious away goal though Mohamed Salah in the 51st minute, but Real had a response of their own as Vinicius (65) struck his second of the night to restore Real's two-goal advantage and leave Liverpool with plenty of work to do ahead of next week's second leg.

How Real brushed aside Liverpool...

Real Madrid came out of the blocks quickly and they dominated the early stages as the visitors struggled to find the rhythm that secured them a 3-0 victory at Arsenal at the weekend.

They were caught napping at the back in the 27th minute as Zidane's team took a deserved lead.

Kroos, with no pressure on the ball, lofted an inch-perfect 50-yard pass forward which Vinicius Junior controlled on his chest before calmly beating Alisson with his second.

Real strengthened their dominance nine minutes later when a mistake from Alexander-Arnold gifted them a second.

The right-back headed another long pass from Kroos straight into the path of Asensio, who lobbed the ball over Alisson before tapping into an empty net.

Man of the match: Vinicius Junior.

Liverpool were stunned and Klopp reacted just before the break bringing on Thiago in place of Keita, but more work was needed from the German at half-time to get his side back into this contest.

But they got the start - and the away goal - they needed early in the second half with Salah blasting the ball home via the arm of goalkeeper Thibaut Courtois and the underside of the crossbar after Diogo Jota had driven into the penalty area.

Liverpool upped the tempo and looked most likely to score next, and but for a goal-saving challenge from Ferland Mendy with Sadio Mane ready to pounce, they would have had their second goal.

However, it was Vinicius who swung the tie back in Real's favour with a sucker punch in the 65th minute.

Luka Modric played the ball into the path of the Brazilian, who squeezed a shot through the legs of Nat Phillips, with Alisson only able to help the ball into the corner of the net, leaving Liverpool with plenty to do if they are to reach the semi-finals.

'Real had too much for Liverpool'

"It was a thrilling game but Liverpool have come out on the wrong end of it.

"The makeshift defence had been a little more sure of itself in recent weeks but this examination was rather more tough and Real Madrid had too much on the night.

"Vinicius Junior was superb but the frustration is that individual errors also played their part - most notably Trent Alexander-Arnold's misdirected header for the second goal.

"Mohamed Salah's away goal means that the tie is far from dead and the opportunity is still there for Liverpool to progress at Anfield but they are up against it now." 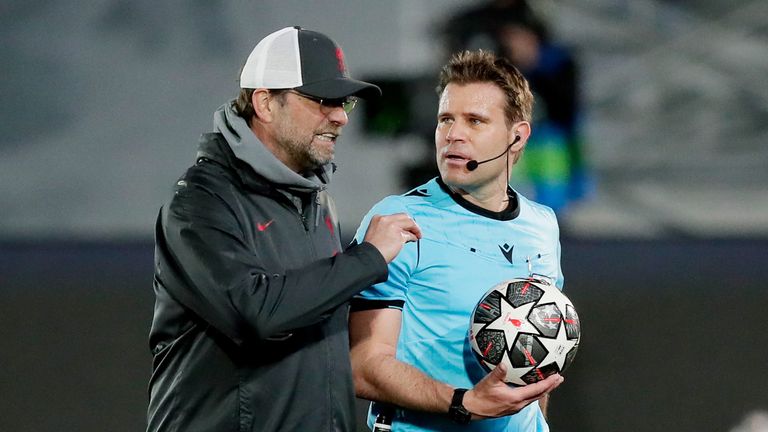 Liverpool manager Jurgen Klopp admits his side didn't do enough to win against Real Madrid and was critical of the referee after the game.

Real Madrid boss Zinedine Zidane: "I am happy for Vinicius because what he is doing and what all the guys are doing is a great job, especially from a defensive point of view. Maybe he was missing some goalscoring with the work he is contributing to the team so to score two goals is big to provide a lot of confidence and he deserves that. I don't know if that was his best match but two goals in the quarter-finals is important for him and the team.

"I am happy because of the football. At the beginning of the second half we had a bit of difficulty but at the end of the day we are happy with 3-1 as it was a huge effort. We have to enjoy what we did today."

Liverpool boss Jurgen Klopp: "If you want to go to the semi-final, you have to earn the right to do so. We didn't do that tonight, especially in the first half. The only good thing I can say, apart from the goal, is it's only the first half of the tie.

"We made it too easy for them. These mistakes can happen. We didn't deserve a lot more but that one goal and the second half was OK. It gives us a lifeline."

On replacing Naby Keita in the first half: "It's not a big story. I don't like it. He wasn't the only one. It was tactical. I could have done a few more changes in that moment."

On what they need in the second half: "Intensity with the ball especially. You cannot defend the speed of Real Madrid when you give them the ball at the wrong moments. If you lose ball in the right moment it's OK. We lost the ball, so many easy passes. You have really quick and world-class players in one on ones. We have to be better in possession."

Man of the match - Vinicius Junior

What a night for the young Brazilian.

He was fantastic and capitalised on Liverpool's defensive frailties as Alexander-Arnold and Phillips struggled to contain him.

Vinicius Junior was also clinical in front of goal and now, only Kylian Mbappe (18 years 113 days vs Borussia Dortmund) has scored a Champions League double at the quarter-final stage (or later) at a younger age than Vinicius (20 years 268 days).