Blair Spittal opened the scoring for County after half-time; Nicky Clark then scored a penalty with 20 minutes remaining; the United forward struck in the 89th minute to seal a precious three points; Dundee United finish fourth after Motherwell were thrashed by Celtic 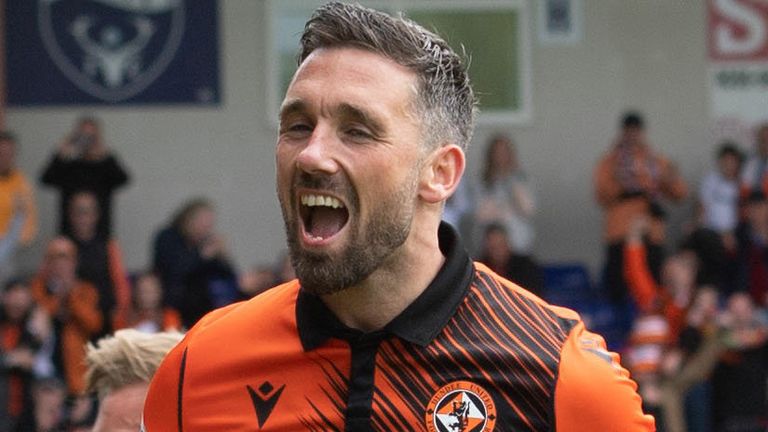 Dundee United secured fourth spot in the Premiership table by beating Ross County 2-1 in a match marred by the behaviour of the visiting fans.

Blair Spittal broke the deadlock in the 66th minute with a fabulous strike from 25 yards out, only for United to equalise from the penalty spot five minutes later through Nicky Clark.

Clark once again found the net in the final five minutes to secure the points for United, whose fans invaded the pitch while celebrating and left one of their own players requiring medical treatment.

Both sides were made to wait to start the game, as the visiting supporters threw beach balls, streamers and pyrotechnics onto the pitch to delay kick-off by several minutes.

Once the game did start the travelling supporters at times seemed more interested in off-pitch antics than the play in front of them, but United were moving the ball more sharply than their hosts - albeit without finding a way through to goal.

Archie Meekison went closest to opening the scoring when his curling effort hit the outside of the post.

Substitutions for both sides came fairly early in the second half, including a Ross County debut for Josh Sims who made his first senior appearance in 12 months.

Two of the players who came on threatened to break the deadlock, with Harry Paton forcing Benjamin Siegrist into action while Ilmari Niskanen curled one just wide of the mark.

Those chances were a sign that the game was starting to open up, and Ross County would take the lead in the 66th minute.

Joe Hungbo's cross went past everyone, but was kept in play before the ball was worked back to Spittal who expertly picked out the top corner from 25 yards out to give the Staggies an advantage.

The lead did not last long though, as five minutes later United were awarded a penalty when Harry Paton was adjudged to have fouled Niskanen - and Clark coolly dispatched the spot-kick, leading to more flares being thrown onto the pitch by celebrating supporters.

There would be one late twist, though, as Clark would score a winning goal five minutes before the end. Dylan Levitt was able to connect with a cross and put the ball back into the middle, where Clark was left with a simple tap-in to wrap up the victory.

In the celebrations, a number of United supporters spilled onto the pitch, with Kevin McDonald requiring medical treatment in the aftermath, although he was able to finish the game.