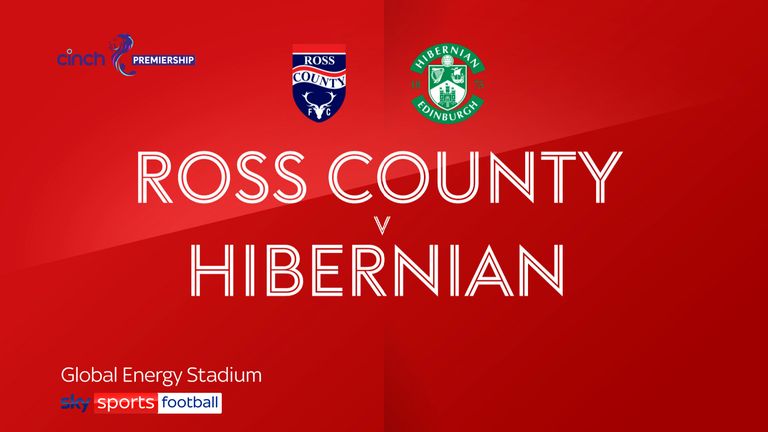 Highlights of the Scottish Premiership match between Ross County and Hibernian

Blair Spittal scored within a minute of coming off the bench to earn Ross County a 1-0 victory over Scottish League Cup finalists Hibernian.

Spittal’s cross went through a crowd of bodies before ending up in the net in the 72nd minute in Dingwall.

Paul Hanlon had hit a post for Hibs and Kevin Nisbet passed up a series of good chances as the Leith side suffered a fifth consecutive Scottish Premiership defeat to bring them crashing back down to earth after their semi-final win over Rangers.

There was further agony for Hibs head coach Jack Ross when Christian Doidge and Martin Boyle were sent off – the latter for dissent after the final whistle.

Ross only made one enforced change following his side’s 3-1 win over Rangers with Darren McGregor replacing the suspended Ryan Porteous for the rearranged game, which was twice postponed amid Hibernian’s coronavirus issues.

Hibs started brightly with Boyle and Chris Cadden causing problems down the right flank. Both delivered crosses which Nisbet could not make the most of from two headers.

Jordan White missed a good chance at the other end when he headed wide from six yards following Joseph Hungbo’s free-kick.

Boyle and Cadden were involved again as Hibs came closest to breaking the first-half deadlock. Hampden hat-trick hero Boyle went past several players before feeding Cadden and the wing-back’s square pass found Hanlon, who swept the ball against a post.

There were some penalty appeals in the early stages of the second half. Josh Doig put in a clumsy challenge on Hungbo but referee Gavin Duncan was unconvinced. The referee twice gave free-kicks when Jack Baldwin and Hanlon tangled in either box.

Hibs continued to look the more likely team. Boyle forced a decent save from Ashley Maynard-Brewer after he turned on the edge of the box and the County goalkeeper was grateful when Nisbet shot straight at him after another good move down the right.

Nisbet headed straight at the goalkeeper again following a Cadden cross and County soon worked their way into the game.

Matt Macey produced his first real save when he pushed Hungbo’s bouncing, curling effort wide but he was beaten moments later.

Spittal put a low ball into the box and it went through a crowd of players after Alex Iacovitti’s near-post dummy before settling in the far corner.

Hungbo had a great chance to double the lead when Hanlon was short with a pass back and Macey fluffed the resulting clearance, but the winger shot over with the 'keeper stranded.

Hibs pushed forward but their chances diminished with an 84th-minute red card for Doidge, who had replaced Nisbet midway through the half. The striker raked his studs down the leg of David Cancola after initially volleying the ball.

County missed a series of one-on-ones with Spittal blazing over and Macey saving from Hungbo and Harry Clarke.

But Malky Mackay’s side did not need the second goal as they recorded a second win in three games to move a point behind Dundee at the bottom.

Ross County manager Malky Mackay: "I'm a little frustrated we didn't capitalise on the three or four fantastic chances to put the game to bed.

"But overall to a man I asked them at half-time to go out and give the same effort and energy. By doing that, it meant we got on the ball and it allowed us to play our football, which I knew was going to be good."

Hibernian manager Jack Ross told BBC Radio Scotland's Sportsound: "We are not on a good run in the league. It's not acceptable for a club of our ambition and standing. We need to be better.

"The only opportunities against us came late in the game when we were down to 10 men. Prior to that we were comfortable.

"First half, we created good opportunities and didn't take them. Second half, we huffed and puffed and maybe ran out of a little bit of energy on the back of Sunday.

"The performance level was OK but it needs to be better than OK to win games and we need to get back to that as quickly as possible in the league."