Match report as St Mirren beat Ross County 3-2 thanks to goals from Eamonn Brophy, Marcus Fraser and Scott Tanser; Blair Spittal and Alex Iacovitti on target for hosts, who have just three points from nine games; St Mirren are seventh 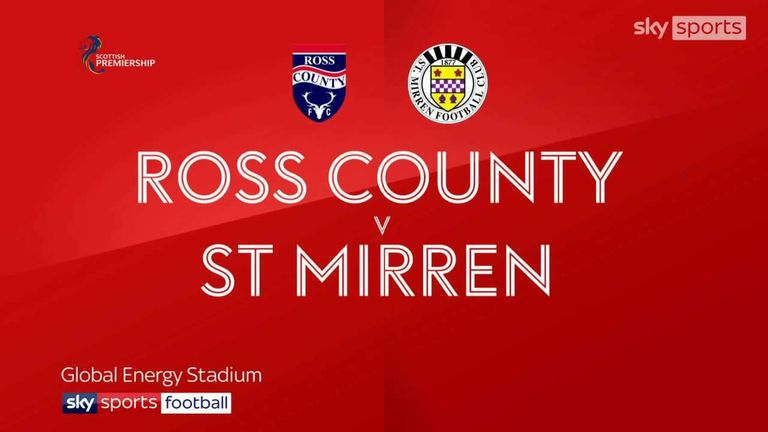 Highlights of the Scottish Premiership clash between Ross County and St Mirren.

Ross County's bid for a first cinch Premiership win of the season ended in frustration once again as St Mirren stretched their unbeaten run to six matches with a 3-2 victory.

But Saints held firm to leave the hosts on just three points from their opening nine matches.

County were after a fast start and nearly went in front with barely three minutes on the clock.

Spittal's free-kick dropped perfectly for Iacovitti, but St Mirren had a left-off as the defender's header struck the right-hand post.

But it was the visitors, undefeated since suffering a six-goal thrashing by Celtic, who took the lead after 15 minutes.

Having failed to nullify the threat posed by Ethan Erhahon, the hosts paid the price when he set up Brophy for a shot from the left side of the area that easily beat Ashley Maynard-Brewer.

St Mirren appeared capable of scoring every time they crossed the halfway line, but it was their turn to feel threatened in the 31st minute when Spittal, Harry Paton and Ross Callachan combined to open up the defence in a slick move which
ended with the latter forcing a spectacular save from Jak Alnwick.

Three goals then followed in the space of five hectic minutes, with St Mirren claiming the first in the 34th minute when former Staggies full-back Fraser came back to haunt his former club by doubling this side's lead with a header from
Tanser's cross.

Spittal pulled one back three minutes later, giving Alnwick no chance with a viciously struck free-kick from 25 yards that deflected off the top of the wall.

However, just a minute later the visitors had a third, Tanser beating Maynard-Brewer from the edge of the area after Alnwick had created the opening with a long clearance.

County survived further scares as Brophy twice caught the defence cold only to shoot wide of the target.

But they grabbed a lifeline in the 66th minute when Iacovitti's glancing header from Harry Clarke's delivery found the net.

Saints, though, stood firm to close out a third consecutive league win.

St Mirren boss Jim Goodwin: "We're over the moon with the end result. We were excellent in spells and scored some very good goals, the first two in particular were excellent.

"I thought our energy levels in the first 45 minutes were excellent. We didn't allow Ross County to get any real foothold. Whether it was tiredness or not, we stopped doing that in the second half.

"Credit to Malky (Mackay) and his players, I knew they would throw everything at us. At 3-2, with 25 minutes to go, it gives the whole place a lift. That's where I'm really pleased with the players' effort and commitment.

"Again it shows the strength and character within the group, which I talk about regularly. Lesser teams would have crumbled and possibly come away with a draw or even defeat. Three points away from home in this league is hard to come by."

Ross County boss Malky Mackay: "We can't give away poor goals like that. For the first one, Jack Baldwin slipped and allowed Brophy in and it's a good finish.

"At the second one, Harry Clarke didn't pick up his man and Marcus Fraser scored an easy header at the far post.

"The third one, on any other day, a player 250 games deep just heads the ball, and Jack left it. It's not as if there was a shout or anything like that.

"To lose a goal like that is disappointing, especially when we got back into the game. We hit the bar, the goalkeeper made a great save and we then

St Mirren's unbeaten run faces a stern test from visiting Rangers, live on Sky Sports Football on Sunday at midday (on air at 11am), while Ross County's next chance to get a win is on Saturday, when they host Livingston.