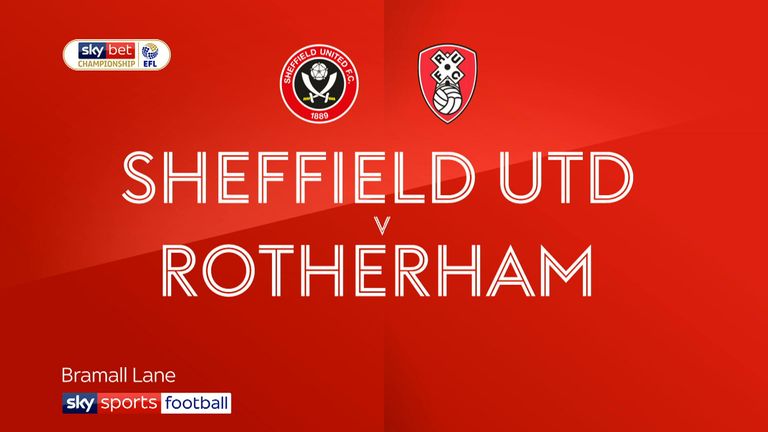 Sheffield United moved back into the Sky Bet Championship automatic promotion places as they beat 10-man Rotherham 2-0 at Bramall Lane.

Jack O'Connell's opener and Mark Duffy's fifth goal of the season ensured a comfortable victory for the Blades after Rotherham captain Will Vaulks was sent off in the first half.

The hosts recorded a fifth successive clean sheet with Dean Henderson largely untroubled in goal as he took his season tally to 15. The win initially sent them up to second, but Leeds' win late in the day put them back to third in the table.

It was a clash between two teams with a contrasting need for points, with the hosts aiming to help their automatic promotion hopes, while their opponents sat in the relegation zone before kick-off.

United were looking to extend their unbeaten run to 10 games, while visitors Rotherham came into the match on the back of six without defeat.

The home side started the game on the front foot and their early pressure paid off as defender O'Connell opened the scoring in the fifth minute.

A low Ollie Norwood corner from the left side found its way to O'Connell who finished like an established striker, sweeping home past the helpless Marek Rodak.

The visitors grew into the game after conceding, putting pressure on the Blades' rear-guard with multiple crosses before Ben Wiles' long-range effort was comfortably saved by Henderson.

United could have doubled their lead at the 20-minute mark as Scott Hogan slid David McGoldrick through on goal but he fired wide after dancing past a defender in the box.

The hosts' chances then improved in the 28th minute as Vaulks was sent off for a lunging challenge on George Baldock after the Rotherham captain had lost possession on the halfway line.

The visitors immediately dropped into two banks of four in defence and midfield, with Michael Smith isolated up front in a backs-to-the-wall performance for the Millers.

United had chances to double the lead before the break as John Fleck's drilled shot was well saved by Rodak.

Hogan had the ball in the net but his effort was ruled out after the referee adjudged the ball to have crossed the byline before Baldock's cross.

United failed to press home their advantage in numbers at the start of the second half, as Rotherham were happy to surrender possession and wait for opportunities on the counter-attack.

Fleck then had another tame effort that dribbled wide of the mark, before McGoldrick's shot on the turn went straight at keeper Rodak.

The hosts were starting to find their rhythm on the hour, as McGoldrick spurned two chances in three minutes.

He fired over from the edge of the area after patient build-up play, before Fleck put him through on goal but Rodak closed him down well to deny him. The ball then fell back to the striker but he chipped over the bar from close range.

The Blades were dominating the game, finding space with an extra man, and the pressure paid dividends as Duffy doubled their advantage in the 74th minute.

Quick thinking from Fleck from a corner meant he found Duffy with time to shoot as he rifled an unstoppable shot into the top corner.

The home side continued to create chances in search of a third goal but had already done enough to take all three points.

Chris Wilder: "They're stubborn opposition so we prepared just as much as any other game this year. We've learned the lessons from what happened at the New York Stadium (where Jamie Proctor hit a stoppage-time equaliser for the Millers) because they were better than us on that day and outfought us.

"It was two different styles today, it's back to front for them and it's effective. They ask questions so I am delighted that we answered those questions defensively."

Paul Warne: "I knew they would start really strong and they did, they got the goal and it was a good finish but then I thought we were in the ascendancy. It took the handbrake off our lads, they were giving it a good go but obviously the sending-off is a massive turning point.

"We came out second with a bit more damage limitation but then they scored another great goal. The lads put in everything they've got, I've got no complaints at all and I'm proud to be their manager."