Match report and free highlights as Nathan Tella scores his first senior goal and Southampton secure back-to-back wins for the first time in 2021, with Fabio Carvalho on target for already-relegated Fulham 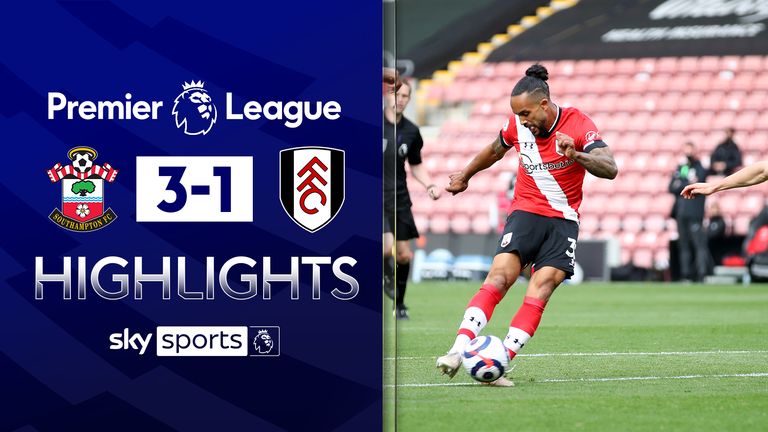 FREE TO WATCH: Highlights from Southampton's win over Fulham

The hosts took the lead in the 27th minute from the game's first shot on target as Che Adams fired home from close range following a James Ward-Prowse free-kick.

They doubled their lead on the hour mark when substitute Nathan Tella tapped the ball into the net just minutes after coming on to the field, his first senior goal in professional football.

Fabio Carvalho marked his full Premier League debut by pulling one back for Fulham in the 75th minute. The 18-year-old was played through by Bobby Decordova-Reid and fired the ball in off the underside of the crossbar.

Substitute Theo Walcott soon restored Southampton's two-goal lead as his deflected shot went past Alphonse Areola to secure a second home win in a week for Ralph Hasenhuttl's side, moving them up to 13th place ahead of the weekend's remaining games.

Fulham - who remain in 18th position - travelled south seeking a response after their return to the Championship was confirmed following the 2-0 home defeat to Burnley last Monday. However, they carried with them a wretched record of having failed to win in their previous 20 visits to Southampton, stretching back to 1935.

Scott Parker handed 18-year-old Carvalho a full Premier League debut as the Fulham boss looked to the future, but chances were at a premium during the opening period.

Ola Aina's mistake allowed Adams to find the run inside from Takumi Minamino but the Fulham full-back atoned for his error to make a crucial last-ditch intervention.

Aina was partially at fault when Saints struck first, however. Stuart Armstrong was fouled by Joachim Andersen, and from Ward-Prowse's resulting free-kick, Adams stole a march on the defender to prod home a simple half-volley from three yards out.

Southampton were fully imposing themselves now and Ward-Prowse came close to extending their lead when his free-kick was punched away by Areola.

Fulham had rarely threatened before the interval, with Carvalho's weak shot easily fielded by the returning Alex McCarthy but there were no changes at the restart.

Southampton had won only one of their previous six league games in which they had scored first, but they came close to a second when another whipped Ward-Prowse corner was flicked on by Danny Ings, only for Minamino to be caught on his heels at the far post.

It would prove to be Ings' final contribution as he was replaced by Tella shortly before the hour-mark - and Nathan Redmond immediately ought to have extended Saints' lead when put through by Adams, but his shot was well saved by Areola.

Fulham's reprieve would be short-lived, however, as Southampton doubled their advantage following a slick team move. Minamino and Armstrong combined in midfield before Kyle Walker-Peters' cross was swept home by the unmarked Tella.

Parker rung the changes as Joe Bryan was introduced, and the full-back's arrowing shot very nearly halved the arrears as it whistled past the post. The former Bristol City defender then found Decordova-Reid following a slaloming run, but Mohammed Salisu got back to make a vital block.

Fulham deservedly hauled themselves back into the contest when Carvalho was put through by Decordova-Reid to flash his shot beyond McCarthy and in via the underside of the crossbar, becoming the club's third-youngest Premier League scorer aged 18 years and 260 days.

Having lost 23 points from winning positions, Hasenhuttl may have feared the worst but his side eased any fears of another late surrender as substitute Walcott latched onto Tella's cute backheel to strike beyond Areola via the boot of the retreating Bryan. 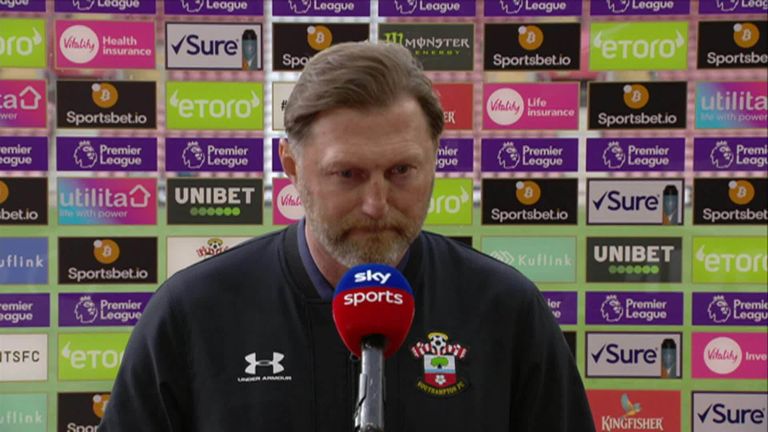 Ralph Hasenhuttl was pleased with his players committed performance in their 3-1 win against Fulham in the Premier League.

Southampton boss Ralph Hasenhuttl: "We showed a committed performance, pleased with the substitutes because it's not been our biggest strength this season but all three had a part in the game. The game balance was good over the game, we knew we had to be clinical, first-half we had chances, we deserved the win.

"I must say that I was very pleased with my side today. My guys produced a very good performance. It's no coincidence we've scored 10 goals in our last four home games as we've got our players back. We had players on the bench who could hold the level high and that's what you need in these moments."

On Nathan Tella: "Since he joined, he has been a lively factor in our game. You can be sure he will sprint more in 20 minutes than others do in 90 minutes, always high tempo which is what you need for a sub, very pleased with his performance.

"I love him he's always positive, he loves what he's doing and that's what you have to do. He's really one of the hardest workers. It's important to take care of expectations but giving him more game time as a sub when the opponent is a bit tired, this is the perfect moment to show up - it's good for a striker to come on late." 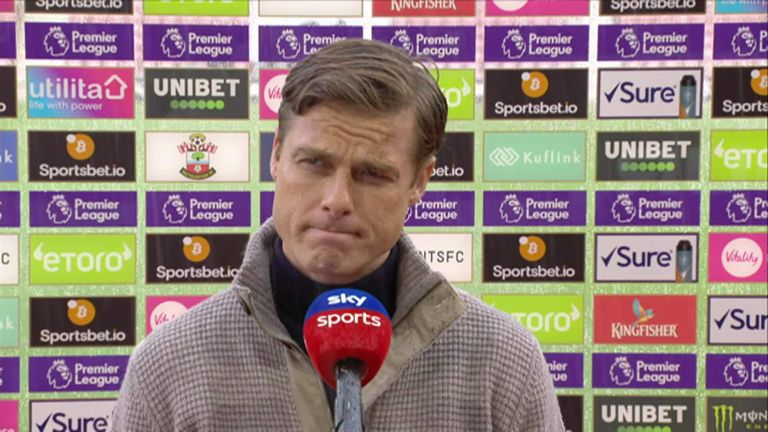 Scott Parker praised youngster Fabio Carvalho’s debut performance which he capped with a goal in Fulham’s 3-1 defeat to Southampton.

Fulham boss Scott Parker: "We showed pride, effort and some good bits. At 2-0 down, we got ourselves back in the game with a lovely goal from Fabio. We just lacked that little bit in the end.

"[Southampton's first was a] poor goal to concede. It looked like we missed a header and then there was confusion. The second goal, we defended very poorly and didn't follow runners. After that, we got ourselves in the game but it wasn't enough.

"It was a snapshot of our season, really. At times, we played well but the first two goals were disappointing. We conceded the second far too easily but then we got ourselves back into the game. We were in the ascendancy at that point but conceded the third when we were pushing for the equaliser. We just lacked at key moments.

"[Fabio Carvalho was] fantastic. It didn't surprise me. He's in the team because we're searching for goals and for someone who can put the ball into the net. He's shown that he can do that at Under-23 level and in training. He was in the team today because he deserved to be in it, not because it was an opportunity. The one shining bright light from today was Fabio. He was the massive plus from today.

"He's someone you see in the 90 minutes today who has got the quality, creates opportunities and is someone you can trust with the ball. We believe he's got a big future and we look forward to seeing him more."

Man of the match - Che Adams

We are seeing a Premier League striker now in Adams. Having failed to score in his opening 24 appearances in the competition, he now has 13 goals in his last 41, adding to his poacher's finish against Crystal Palace earlier this week.

No player produced more key passes than Adams' three as he dropped deep to provide a creative source to help Southampton secure a 12th league win of the campaign. The former Birmingham forward showed his aerial prowess, having a team-high four duels.

Hasenhuttl said on Adams: "His statistics for the season we have spoken about and he could have much more goals, but he always works hard for the team, the more he sores the more he deserves to play because he hasn't always had it easy but this year he has had a bit of a breakthrough."