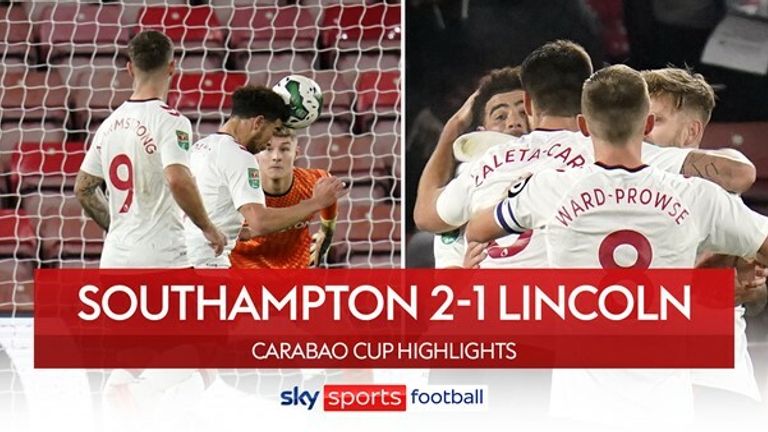 Highlights of the Carabao Cup fourth round match between Southampton and Lincoln.

Top scorer Adams struck either side of half-time to spare Saints' blushes after the Imps threatened an upset following Gavin Bazunu's early own goal.

The lacklustre hosts laboured for much of a forgettable fourth-round tie at a sparsely-populated St Mary's, leaving Jones with plenty to ponder as he plots a Premier League survival mission.

Adams' winner - his eighth goal of the season - arrived 16 minutes from time, preventing the jeopardy of a penalty shootout, which Saints had required to sneak past third-tier Sheffield Wednesday in the previous round. 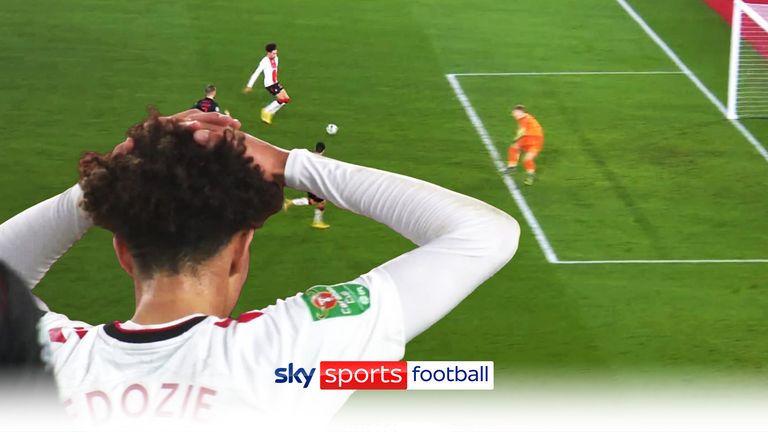 Southampton's Samuel Edozie had the perfect opportunity to put the game to bed late in their Carabao Cup match against Lincoln, but missed an open goal from eight yards!

Lincoln, who sit 14th in Sky Bet League One and beat Championship Bristol City in round three, acquitted themselves well and will probably leave the south coast feeling aggrieved as replays suggested Adams' 25th-minute equaliser was offside.

Saints substitute Samuel Edozie squandered a golden chance to make the result safe in added time when he somehow shot wide of an open goal, while match-winner Adams should have claimed a hat-trick with another excellent opening.

Jones' maiden match as Saints manager - a 3-1 Premier League loss at Liverpool on November 12 which left the club second-bottom in the top-flight - came two days after he replaced the sacked Ralph Hasenhuttl.

The former Luton boss was forced to wait a further 38 days for his home debut due to the World Cup and, having named a strong team, endured a nightmare start.

Ainsley Maitland-Niles woefully sliced a Max Sanders corner high into the air inside two minutes and, as the ball dropped dangerously underneath the crossbar, Bazunu inadvertently bundled home under pressure from Imps defender Paudie O'Connor.

Jones had plenty of time to work with his new squad during the enforced break in domestic football, with Germany international Armel Bella-Kotchap and Ghana defender Mohammed Salisu the only Saints players involved in the World Cup.

His disjointed side took time to bounce back from the shaky start and appeared to benefit from a significant slice of fortune for their equaliser.

Adams, who moments earlier was denied by a fine stop from City goalkeeper Carl Rushworth, headed home a Mohamed Elyounoussi cross but replays suggested it should have been disallowed for offside.

With VAR not being used in the competition until the semi-final stage, the goal was allowed to stand, much to the frustration of Imps boss Mark Kennedy and the healthy travelling support.

When is the quarter-final draw?

The quarter-final draw will take place live on Sky Sports following Manchester City vs Liverpool on Thursday night. The last-eight ties are then scheduled to take place during the week commencing January 9 2023.

Lincoln's only win at Southampton was a 3-2 second-tier success in December 1960.

The visitors were far from disheartened by the controversial leveller and almost regained the lead when Bazunu produced a smart stop to deny the lively Charles Vernam just before the break.

Murmurings of discontent greeted the half-time whistle and Southampton continued to toil following the restart, despite dominating possession.

City keeper Rushworth went largely untested, while Lincoln enjoyed further moments of attacking enterprise as they went in search of a shock.

With the threat of spot-kicks beginning to loom, Southampton finally went ahead.

Sanders came close to levelling with an effort from distance late on before Edozie and Adams both wasted glorious chances in added time.

Jones: Rome wasn't built in a day - we won't turn into Barca overnight

Southampton's Nathan Jones: "We won the game. How many games have Southampton won this year? We're trying to build something and we're trying to win games. We're not going to suddenly turn into Barcelona overnight. With the greatest of respect, we probably haven't been doing the basics well enough up til now and that's why we're in the position we are, so we have to build.

"Rome wasn't built in a day, and neither was a fantastic Southampton team. The biggest thing today was we're in the hat. We could have played wonderful today and created a hundred chances and lost and, if I'm honest, we're better off playing like we did, learning something from it and being in the next round. There have been grumblings because we're a Premier League side and we look at Lincoln and think, 'we should be beating those' but we did beat them, albeit not in swashbuckling style.

"We didn't give ourselves the best start with the catastrophic first minute. We could have put the icing on the cake with a few late chances. It was probably a little bit more hairy than we would have liked. But we created enough chances to have won by more, we had 70 per cent possession. I saw a lot of real positive things come from today, stuff that will stand us in good stead."

Southampton return to action on Boxing Day with a visit from Brighton to St Mary's in the Premier League; kick-off 3pm.

Lincoln City are also next playing on December 26 as they travel to Burton in League One; kick-off 3pm.