Match report and free highlights as Watford earn a crucial win over Southampton at St Mary's; Cucho Hernandez scored twice for the visitors in the first half; Mohamed Elyounoussi pulled a goal back before the break; Roy Hodgson's side move level on points with 17th-placed Everton 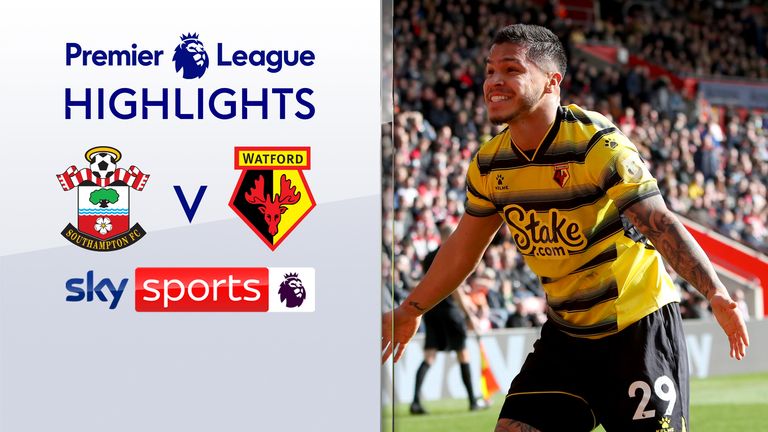 FREE TO WATCH: Highlights of Watford's win at Southampton in the Premier League

Cucho Hernandez scored twice to give Watford a crucial 2-1 win over Southampton at St Mary's and boost the Hornets' Premier League survival hopes.

​​​​​​The result sees Roy Hodgson's side end a run of two straight defeats and move level on points with 17th-placed Everton, who were beaten at home by Wolves.

Watford opened the scoring in the 14th minute when Hernandez pounced on Southampton defender Mohammed Salisu's weak back-pass and found the net from a tight angle after rounding goalkeeper Fraser Forster.

Man of the match: Cucho Hernandez.

The unmarked Colombian then doubled Watford's lead 20 minutes later when he steadied himself and impressively volleyed in a cross from Juraj Kucka.

Watford had several chances to go 3-0 up but Southampton pulled one back before half-time when Mohamed Elyounoussi tapped in Che Adams' flicked header following a free-kick from captain James Ward-Prowse.

Southampton continued to press after the break but Watford defended bravely. They rode their luck late in the game when Ward-Prowse narrowly missed the mark from a free-kick and VAR rejected calls for Christian Kabasele's handball to be penalised, but they managed to hold on to secure a vital three points.

"I thought the attitude of the players and their obvious desire to play well and win this game was there for all to see," Watford manager Hodgson said.

"What pleased me was the fact that after conceding that goal at the end of the first half and not having the cushion of a two-goal lead at half-time, it could have really dented our confidence and belief but it didn't.

"In the second half we continued where we left off and resilience is such an important factor in top Premier League football.

"It doesn't matter if you are fighting at the bottom or trying to qualify for the Champions League, you have to have the resilience to stay in the game, deal with corners and free-kicks, all the things that can happen and we had that resilience."

Both sides had lost on Thursday night and Saints reacted by leaving top goalscorer Armando Broja on the bench while Watford made three changes from the 4-0 defeat at Wolves.

Southampton almost took the lead inside two minutes. Stuart Armstrong crossed for Elyounoussi on the opposite flank but the Norway international saw his header cleared off the line by the recalled Kabasele.

Joao Pedro then nearly put the visitors in front when Salisu's clearance went straight to the Brazilian, but Jan Bednarek bailed out his centre-back partner with a fine block.

Salisu and Saints did not learn their lesson, with the opener arriving in the 14th minute after another error. First, Forster's ball out from the back was nearly intercepted and when Salisu tried to play it back to him seconds later, his pass was short and Hernandez rounded Southampton's goalkeeper and finished impressively into the empty net.

In the 34th minute, a neat move down the left saw Kucka teed up and he produced a wonderful whipped cross to the back post, where Hernandez volleyed home to double his and Watford's tally.

Kyle Walker-Peters went close again before the break and Kucka could have put the game to bed, but Forster denied the midfielder after he was sent through by Moussa Sissoko.

It felt pivotal when Elyounoussi reduced the deficit minutes later on the stroke of half-time by directing a Ward-Prowse free-kick beyond Ben Foster.

Saints' leading marksman Broja was introduced for the restart but the Chelsea loanee was managed well by Kabasele, with the home side's best threat coming through set-pieces. Salisu headed another Ward-Prowse free-kick wide just past the hour mark and Ralph Hasenhuttl went to three at the back in an attempt to force a leveller.

Kucka had another opportunity to seal the points with 19 minutes left but his curled strike was saved by Forster and Hernandez squandered a hat-trick chance when he curled over following a counter-attack.

Free-kicks continued to be Southampton's biggest threat and St Mary's held its breath when Ward-Prowse lined one up late on. The Saints captain curled the set-piece onto the roof of the net, though, and Foster saved Adams' header before VAR dismissed the home side's calls for handball on Kabasele as Watford held out for an important win.

Watford host relegation rivals Leeds and Burnley in April and also face Brentford and Everton on home turf before the end of the campaign.

Watford manager Roy Hodgson said: "We know quite frankly we have got four games against the teams who are catchable and they are going to be tough games. They are killer games in a way because if we continue to do okay, everyone will expect now you play them at home you will win but that's not how the Premier League works.

"Southampton did not expect Newcastle and Watford to come here and win because they are playing well, have a good team, but that is what happens.

"I am fearful of those games but you cannot deny they do give you a chance, they are home games and they are six-pointers if you like."

Southampton manager Ralph Hasenhuttl saw his side suffer a third consecutive defeat and while he admitted the visitors deserved their win, he was frustrated by the number of stoppages for injuries.

He said: "I must congratulate Watford for the three points. They need them and absolutely deserved them for their defensive performance, their coolness and cleverness.

"I would maybe do the same if I am in a relegation battle but I don't know if we want to see this in the Premier League, that every action is immediately stopped with one minute of laying on the ground after every foul, but I understand they are fighting for their lives.

"It is hard then to find the rhythm for us and hard to find our game. This is the second time this week it happens. Against Newcastle it was very similar and we have to learn. We have to find solutions to this."

Man of the match: Cucho Hernandez

Foolish to write off Hodgson's Watford

Roy Hodgson was praised by Southampton boss Ralph Hasenhuttl in his matchday programme notes for making Watford "more organised" since his arrival at Vicarage Road in January.

After Thursday's 4-0 thumping at Wolves, though, nobody could be blamed for thinking the Hornets had no chance of avoiding relegation.

The signs didn't look great either as they made their way to the south coast to face Southampton on Sunday afternoon, having failed to win any of the previous six Premier League meetings between the sides.

But Watford were resilient throughout the game at St Mary's and deservedly earned their 2-1 win, defending resolutely as a unit and limiting the hosts to very few clear-cut chances. When their backline was breached, they were able to rely on the self-assured Ben Foster to keep them in front. The performance was unrecognisable from the mauling at Molineux three days ago.

Also boosted by the return of striker Joao Pedro, who played centrally with the lively Cucho Hernandez and Emmanuel Dennis either side, Watford's attack will be key to getting them out of trouble.

Despite having played three games more, they are now level on points with 17th-placed Everton and have given themselves hope of producing an unlikely escape. With Hodgson at the helm, it would be foolish to write them off.

Southampton's next Premier League game against Burnley on Saturday has been postponed and they will instead face Manchester City on Sunday at 3pm in an FA Cup quarter-final. The Saints will return to league action on Saturday, April 2 at 3pm against Leeds.

Similarly, Watford's league game against Everton on Sunday has been postponed and the Hornets' next Premier League fixture will be played against Liverpool on Saturday, April 2 at 12.30pm.