Highlights of the Scottish Premiership match between St. Johnstone and Dundee.

St Johnstone and Dundee both remain in relegation trouble in the cinch Premiership after the Tayside derby ended in a goalless draw.

Saints halted an eight-game losing run in the league but passed up an opportunity to leapfrog their neighbours who had suffered defeats in their previous six Premiership matches.

While rival managers Callum Davidson and James McPake could take satisfaction from clean sheets, neither side could conjure up the goal needed to break the deadlock and it left Saints in the automatic-relegation spot, two points behind the Dark Blues.

The striker's inclusion came hot on the heels of being recalled from a loan at Kilmarnock in the Championship.

Saints manager Davidson has been plagued by injuries all season and in the eighth minute, Ciftci pulled up clutching a hamstring and had to be replaced by Chris Kane. Ciftci cut a disconsolate figure as his home debut was cut short and he was forced to limp up the tunnel.

Defender Jamie McCart tested Dundee keeper Adam Legzdins from an early corner but his effort was easily held under the crossbar.

In the 14th minute, supporters united for a poignant ovation in memory of teenage dancer Lily Douglas who lost her battle with cancer at the weekend.

One troublesome Cammy MacPherson delivery in the wind evaded Legzdins and the Dundee keeper was relieved to see the ball slide wide for another corner.

Dundee engineered their first effort on target in the 40th minute but Max Anderson's 18-yard shot was drilled straight at keeper Zander Clark.

Six minutes into the second half and Dundee manager McPake pitched in veteran midfielder Charlie Adam and new signing McGinn.

Minutes later Hendry latched onto a Liam Gordon lob but Legzdins denied him with a front-post save at the expense of a corner.

Dundee striker Leigh Griffiths finally tested Clark with a fierce shot from the edge of the penalty area in the 63rd minute as the play began to open up and late in the contest McCart made a vital clearance in the six-yard box to frustrate Adam.

St Johnstone boss Callum Davidson: "I thought it was a typical, nervy performance from both teams. Conditions and the pitch didn't really help," he said.

"But we asked them for a bit of character, a bit of spirit and an energy level. I thought we got that.

"It means I can sleep tonight a little bit better. That's about it. It's just a point but hopefully we can build on it.

"We need to try and progress, get a couple of new faces in, get the confidence back up." St Johnstone boss Callum Davidson says he will take the positives from their draw against Dundee and hopes to add to his squad before deadline day.

Dundee boss James McPake: "It was tough conditions on a tough pitch but the players gave me everything.

"We lacked a bit in the final third. There wasn't much in the game. We rolled the sleeves up when we had to.

"St Johnstone are fighting for their lives, just like us. It was two teams battling it out." 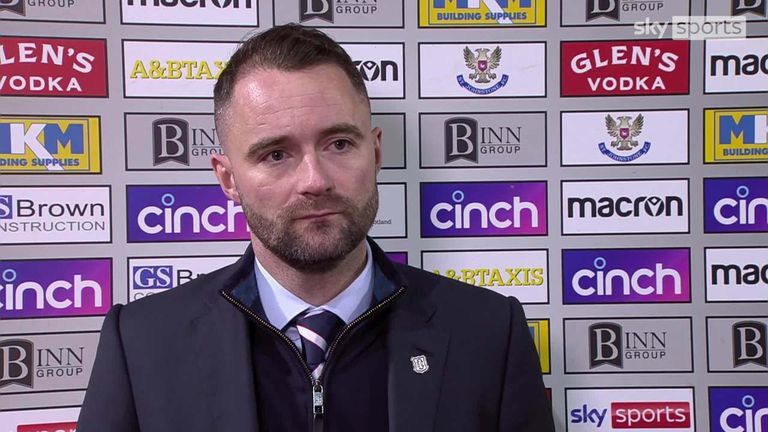 James McPake says Dundee will battle to move away from the relegation zone after drawing with St Johnstone and gives an update on the future of Leigh Griffiths.

St Johnstone travel to Aberdeen, while Dundee host St Mirren, with both Scottish Premiership games kicking off at 3pm on Saturday.